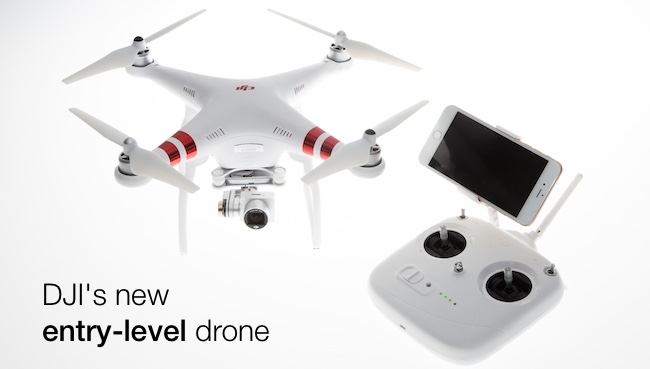 We’ve detailed recently the hoops you have to go through to get a professional drone license nowadays, but for those that just want to shoot some video for their own use, DJI has just released the $799 Phantom 3 Standard.

According to DJI the Phantom 3 Standard makes aerial imaging more accessible than ever before. Based on the existing Phantom 3 design, the drone features a newly designed integrated camera, which will record up to 2.7k HD video at 30fps using a 94 degree distortion-free lens. Stills are captured at 12MP in both DNG Raw and jpg formats, while a standard WiFi connection transmits HD back to the pilot in ‘near realtime’

The remote is an updated version of DJI’s previous Phantom 2 Vision+ controller, with an integrated WiFi range extender and a wheel to angle the camera, while plenty of other functionality is governed by an updated DJI Go app.

Flight time is an impressive 25 minutes and the Standard flies with all the intelligent flight features that you would hope of in a beginner model, including Follow Me, Waypoint Navigation and Point of Interest flight planning.

More in the press release over the page.

Shenzhen, August 5, 2015 – DJI, the global leader in innovative aerial robotics, today released the most accessible flying camera (‘drone’) the company has ever created.

“Based on the remarkable success of the DJI Phantom 3 Professional and Phantom 3 Advanced, we wanted to create a new drone that addresses people who are curious about aerial imaging, but not quite ready to commit to a more professional system,” said Frank Wang, DJI’s CEO and Founder. “The Phantom 3 Standard makes it easy to get into the air to take great photos and videos.”

With a newly designed and integrated camera, the DJI Phantom 3 Standard records up to 2.7k HD video at 30 frames per second using a high-quality 94 degree distortion-free lens. The camera also shoots still images at 12 megapixels in both DNG Raw and JPG formats. Using a standard WiFi connection, the DJI Phantom 3 Standard allows pilots to see what their camera sees in near real time in HD, capture photos, start / stop record for video and adjust camera settings all from the updated DJI Go app.

The remote controller is an updated version of DJI’s previous Phantom 2 Vision+ controller, with an integrated WiFi range extender and wheel to angle the camera.

Based on the Phantom 3 design, the new DJI Phantom 3 Standard includes GPS-based stabilization and flight times up to 25 minutes using DJI’s interchangeable Intelligent Flight Batteries for the Phantom 3 series.

The DJI Phantom 3 Standard will be compatible with intelligent flight features including Follow Me, Waypoint Navigation and Point of Interest flight planning.

Follow Me – The drone intelligently follows the user based on their orientation.

Waypoint Navigation – Allows users to set a multi-point route that the Phantom 3 flies automatically while leaving camera control (pan and tilt) to the user. Users simply have to pull back on their controller and the Phantom will retrace its path to the beginning.

Point of Interest – Lets users define an object that the Phantom will fly around in a circle with the object framed perfectly in the center – capturing a cinematic shot that is otherwise difficult to fly manually.