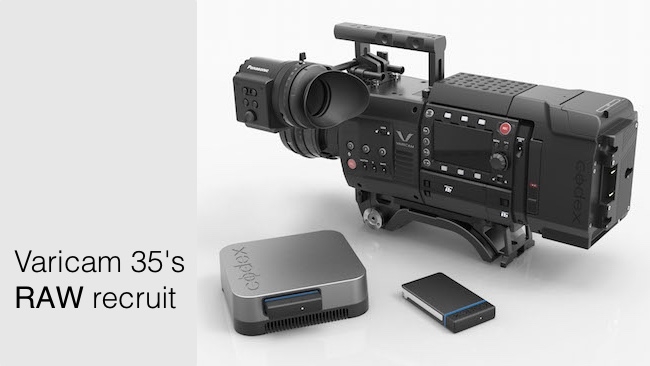 Much admired for its on-set colour grading functionality, low-light responsiveness and superb image quality, the VariCam 35 marked Panasonic’s return to form in the pro-level camera arena. Now V-RAW brings uncompressed 4K RAW recording at up to 120fps to the party, giving users access to industry standard workflows via the Codex Vault Platform and broadening the camera’s reach into high-end film production.

While the VariCam 35 itself is a tethered unit (Panasonic originally planned to output data via WiFi), the V-RAW is a direct-attach module — eliminating the need for additional cabling and also simplifying power connections into the bargain, with the unit supplying power to the camera and up to three accessories via built-in 24V outputs.

Press release over the page...

“We’ve worked with Codex recording and workflow technology for several years and they have great, reliable products backed by excellent support,” said Michael Condon, SOC, VP Digital Division at Clairmont Camera in Los Angeles. “We are excited to get the new Codex V-RAW Recorders into the hands of our rental customers and happy that Panasonic chose Codex as their technology partner for RAW workflows.”

The Codex V-RAW Recorder for the VariCam 35 continues Codex’s tradition of providing not just the most reliable recording and media in the industry, but also a fully-featured, streamlined workflow from production to post and archive, via Codex Vault Platform, Vault Review, Review Live and Media Vault systems. Existing Vault customers, such as Atlanta-based cinematographer and rental house owner John Sharaf, appreciate that despite the data requirements of the VariCam 35, Codex products are engineered to meet today’s challenge of faster throughput. Along with Clairmont Camera, Sharaf is one of the first V-RAW Recorder owners in the United States.

“As a Codex Vault owner, I am very familiar with Codex products already,” said Sharaf. “Panasonic couldn’t have chosen a better partner for RAW recording and workflow for the Varicam 35. Codex’s products are cutting-edge and backed-up by world-class customer support.”