Thinking about moving from stills to video? You need to think it through first 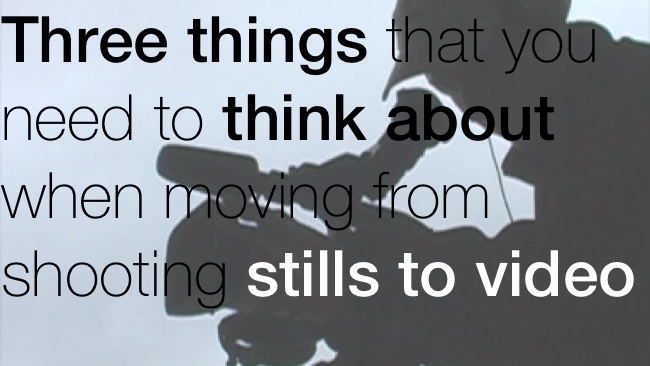 There's no doubt that a rise in video ubiquity is having an impact on the stills market. But while the choice between video and stills is often now just a change of setting on high-end DSLRs, when it comes to the practicalities of switching there are some things that photographers need to bear in mind.

You will probably be able to think of more, but the three most obvious ones that sprang to mind with us were audio, editing and lighting.

Audio is a new skillset entirely and one that you need to think through before starting to shoot. It's not so much the extra expense, which can scale from nearly nothing to how many thousands do you actually have burning a whole in your pocket, as the fact that it changes pretty much everything at every stage of the process, from cursing the client under your breath while filming to adding soundtracks during post production. Basically you have to account for a whole new sense.

Lighting is a case of finessing knowledge that you probably already have. If you are comfortable with colour temperatures and white balances, then you're halfway there already, especially when it comes to the holy grail of setting up lighting for simultaneous still and video shoots. In that situation, strobes can either be used in tandem with constant sources or instead of them.

This is important enough to almost be a fourth thing to bear in mind: such shoots are becoming a growing requirement, with clients also often wanting an overarching visual package and a consistent look between the video and stills work. It might be an obvious thing to say, but remember you don't have to do everything yourself; sometimes forging links with a video production company and divvying up projects is the most obvious route forward, especially if you're a single operator and land a behind the scenes job: photographing yourself filming is never going to work out well, no matter how miraculous future selfie sticks become.

And that paradigm of partnering becomes an especially good idea when it comes to video post production, which can make any amount of finessing in Photoshop seem like a comparative walk in the part in comparison. Video editing in particular is an art form all on its own with a very specific language and poor editing has been the death of many a promising project, no matter how good the initial shoot. Simply put, do not underestimate the learning curve required or the unpleasant impact post can have on budget and deadlines