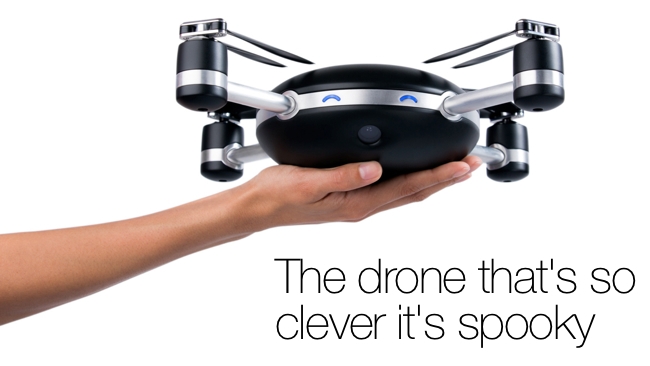 Most UAVs (Drones) have some degree of automation. But this one - within a narrow range of abilities - takes autonomous filming to a surprising degree. What this device can do is astonishing!

Lily is a new UAV that has been designed as what I can only term a Lifestyle UAV. The Lily UAV has no form of control. At around 10” x 10” it isn’t a nano sized copter, but at 1.3kg it has been designed to fit into a rucksack. To operate it you simply throw it into the air and it kicks into action using a device on your person to track you with.

Lily will only track the person holding the tracking beacon. The manufacturers claim that Lily is fully waterproof to IP67 standards. One of the demonstrations on the product video shows the UAV being literally throw into a river before kicking into action and lifting into the air all by itself. Prospective buyers will be glad to know that Lily floats!

As a result of this waterproofing the battery cannot be swapped out, so you are limited to a run time of 20 minutes before it needs recharging, which will take around 2hrs.

The camera records a full 1080p, although curiously there is no form of gimbal for stabilisation. My first reaction to this was to wonder what use any of the footage would be, especially after I read that stabilisation would be carried out digitally by windowing the sensor.

I have to admit that despite my initial reservations the demonstration footage taken with the device looks mightily impressive and so it may well have some use for those with spare cash! It isn’t rock solid like a true gimbal, but for adventure sports enthusiasts who want something extra over and above GoPro footage from their head, Lily could provide for some entertaining footage.

Framerates run from 60fps in 1080p through to 120fps in 720p mode, both with a 94 degree field of view, which should minimise any chance of the dreaded fish eye effect. Those who are after stills will be happy to know that it can take these at 12MP resolution.

There are questions over its legality in some countries such as the UK where pilots need to be able to take over manually at any time. Lily also has no form of proximity sensor, so it remains to be seen how well it can cope in environments with trees and other obstructions. My guess is that any prospective owner will need to find some big open spaces to get the most from it.

There are some safety features such as limiting the device to a minimum of 5ft from the user in any direction, with a maximum altitude of 50ft and a maximum distance of 100ft.

The tracking device can be wrist mounted and is also fully waterproof. Interestingly it records sound, which is then synched up with the UAV footage.

Price is currently at $519 for early adopters before rising to $999 on release.

Watch the Lily video below, and if you want more drone footage, here's some of the best we've ever seen