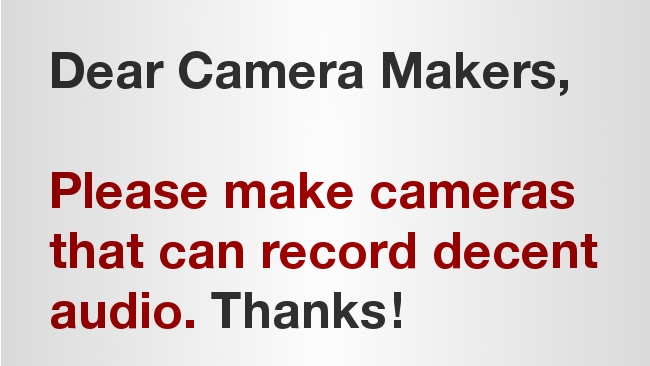 Whether you call it single system or in-camera sound, it may be time that camera makers develop products with better native audio recording capabilities.

Sound is one of the most important aspects of any video production. Such is its importance that, far more than picture quality, it is the main distinguishing factor between amateur and professional video. I have written on RedShark about this before, but it remains one of the most neglected aspects of lower budget productions.

Creative use of sound design can enhance any video, but the work starts with obtaining great sound on location.

When the ENG camera ruled as king, it was pretty normal to simply hook up the XLR mics to the camera to record sound. Most semi-professional cameras also come with XLR inputs to make such recording easy.

Unfortunately, as any audio expert will tell, you the pre-amps inside most cameras are typically less-than-stellar. This is one reason why off-camera sound is often recorded using dedicated pre-amps and mixers for optimum quality (even if you might assume that the camera has a decent one). The pre-amps on cameras such as the Blackmagic models are notoriously noisy, for instance.

It is possible to use an add-on pre-amp to assist in obtaining a quieter signal for the in-camera recording by having a high output from it to the camera, while the camera recording level is set to minimum, but this adds more bulk to any rig that may be being used. However, in many cases where off-camera sound recording isn't practical, it may be necessary.

How we went off

The popularity of DSLRs pushed the idea of separate sound recording to a larger user base. The audio circuits on such cameras really were pitiful. And off-camera is, after all, how most feature films are traditionally recorded. However, if you are working as a small crew, then separate sound recording adds a complication that could well be done without. In a world where miniaturisation and accessibility to gear gets ever easier, should we really still need to record off-camera sound to obtain the best quality?

I think that it is about time that the camera manufacturers started to take sound a bit more seriously. Too often, it is an afterthought, with most of the focus going to the front end of the device. In a related issue, we took a step back in the last few years with the need for off-camera video recording.

For people hankering for a return to the days of U Matic, where lugging around the separate video recording device was the norm, this may be fine, but I think that we should be simplifying things rather than making them more complicated. With much better internal video recording formats, the need to do this has reduced somewhat. It is about time we had a similar thought process with regard to sound.

Having to record separate sound as a matter of course, simply because many cameras have pitiful audio circuits, shouldn't be happening in 2015.

When I am on a shoot, I want to concentrate on making a good picture, not fiddling with an ever-increasing amount of gear. More and more, cameras are now finally capable of recording good, high bitrate internal video recordings. The manufacturers eventually realised that 4:2:0 25Mbps MPEG 2 was not really acceptable to users who couldn't see why they needed to pay an extra £20K or so for the next step up. As common sense prevailed, we can now record raw and Prores HQ in cameras under £2K.

The time is now

Now, the attention needs to turn to sound. We need good quality XLR inputs for certain, which are already present on many cameras, but more importantly we need much quieter audio circuits. We shouldn't be forced into off-camera sound recording to obtain a decently useful result. Sound is, after all, often manipulated in post just as much as the picture. We wouldn't accept a highly noisy video camera picture any more. So the same reasoning stands with audio.

There are those that will insist that separate sound recording is still the best way of doing things because it allows for dedicated equipment that is designed specifically to do a good job in that regard. Flexibility of movement will also be cited when using a boom operator or a Steadicam. A fair comment.

For the high end productions or for those in the circumstances mentioned, I would agree. However, for most corporates having to wrangle an ever increasing number of files and then having to sync them up in post, even if the process is more automated now, it still takes up time and effort that I would prefer to be putting into the edit. It is also more stress. Have I charged up enough batteries for the 100 devices that I need to use? Have I got spare power leads for all of them in case I have a problem? Will the extra devices work or will they break down?

Each extra piece of gadgetry that is used is an extra layer of uncertainty – something else that could break or go wrong. Something else to monitor to ensure it is still working as the interviewee talks away. I accept the argument that says that off-camera recording offers a buffer or backup. However, if your camera breaks down, all you'll be left with is audio anyway!

Do we really need high quality audio circuits for just an interview? In my opinion, yes. I sweeten my audio regardless of the budget. I tweak my sound for intelligibility, at the very least. The picture on cameras these days is very low noise. Why accept noisy audio? If you need to bring up quiet, subtle parts of speech or other sound, it would be nice if that subtlety was present in the first place without bringing up a whole lot of noise with it.

There you have it. I have set out my stall. The cameras that are being produced now are producing picture quality increases that are almost indistinguishable to the eye. Until we have final displays that can show a vast increase in dynamic range, we won't see a real step change in visuals. Luckily Dolby is working on this very issue.

However, what the camera manufacturers can do is to make the gear easier and more practical to use. Giving us great audio and audio controls would be a good move.