F5 and F55 list prices revealed - how this changes the landscape 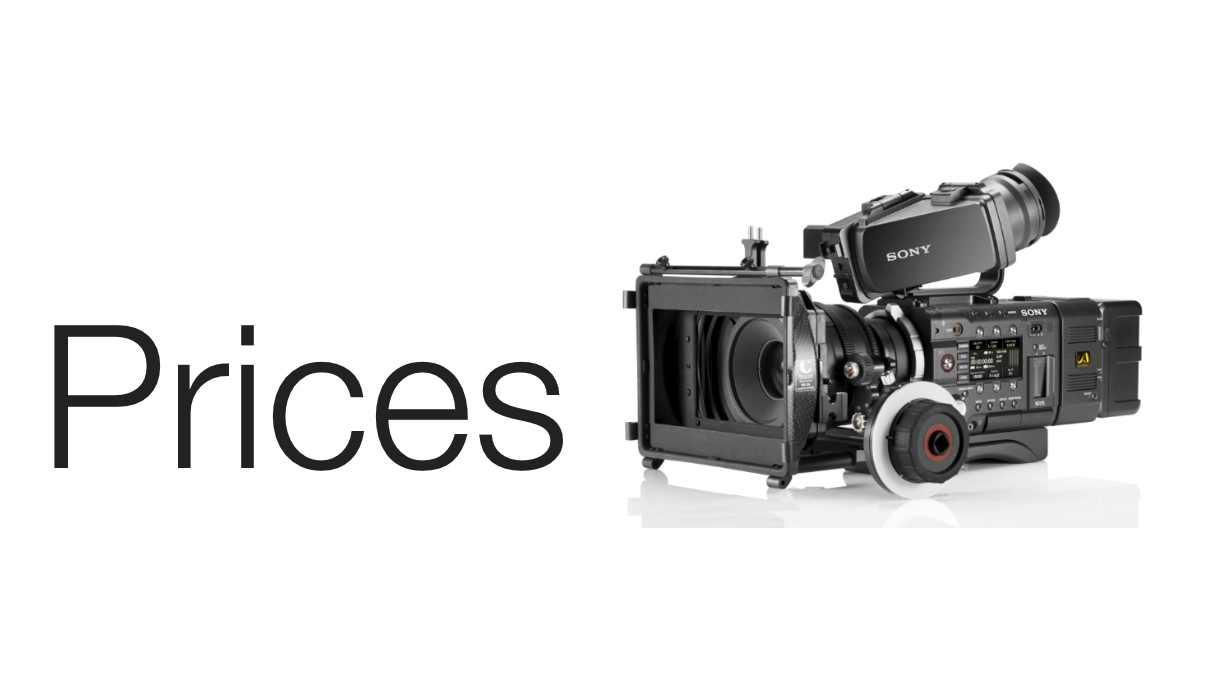 Ned Soltz, our East Coast correspondent, has all the details on the new Sony pricing, and how it will stir up the Digital Cinematography marketplace

After two weeks of teasing, Sony released on October 30 details about their NewF product family of 4K Super35 sensor cameras and associated accessories. Now almost a month later, Sony has quelled price speculation with the release of suggest list prices of a number of products in the line

The chart below summarizes prices released as of this writing.

A quick scan of the discussion boards shows users divided between “what a bargain for such features” and “way overpriced.” It should first be noted that these are list prices and street prices are typically as much as 15% less. A European authorized dealer is already advertising the F5 for EU 12,738 and the F55 for EU 23,487 (all prices plus VAT).

We have already discussed the features that these new cameras and associated peripherals bring to the market—multiple codecs, 2K/4K/raw, modular design, high frame rates and advanced sensor design. But with pricing now set, the real question is going to be one of market acceptance.

The marketplace is now divided between Red, Canon, Arri and Sony. Sony now has a complete range of larger sensor cameras from its NEX FS100/700, to the PMW F65. With the addition of an interface, the FS700 can record 4K raw to the R5 recorder.

The true game-changer in the product line is the F55 with its global shutter, wide color gamut equivalent to that of the F65 - yet at half the price - and its ability to record XAVC-encoded 4K to Sxs Pro+ cards. Both the F5 and F55 can record 16-bit linear raw 4K to the external recorder.

But does it shake up the market?

Canon introduced the C300 recording 8-bit XDCAM 50Mbps internally and in short succession announced the C500 with its ability to shoot 4K externally to encoding recorders such as the AJA KiPro Quad. The C300 was originally priced at just under $16,000 US and currently has a $1000 rebate plus a non-interest finance option. The C500 remains at $25,000 US.

Sony has clearly shaken the Canon tree with the F5/F55 owing to what many consider to be a more ergonomic form factor as well as the more extensive recording options we have been discussing. Verdict—a game changer when it comes to Canon and pricing that reflects the value added to the Canon feature set.

The F5 and F55 approach many of the features that made the Arri Alexa an overnight success with DPs, particularly in commercial and episodic TV work. The F65 is beginning to appear on TV and motion picture sets, but for now anecdotal evidence suggests that Alexas are far more common. Both F5 and F55 have lower price points than Alexa and record high quality internally, a major selling point of the Alexa. Verdict—Alexa will retain popularity but F5 and F55 will turn the heads of producers and DP’s. Both feature set and price point will attract this market.

Red is another matter. Whether one wants to argue that Red dropped prices because they found a more efficient manufacturing path or whether they wanted to set their prices below Sony is a fruitless discussion. The simple fact is that Scarlet is now under $8000 US and Epic starts at $19,000 US (brain only). Adding power and recording peripherals rapidly brings that price up, of course. But Red, who built their entire philosophy around beyond-HD recording, will doubtless rise to any competitive challenge.

Red has its fervent adherents. Sony and Canon users are far less passionate than many of the Red crowd. Sony and Canon in their implementation of 2K/4K contend that they are very different tools from Red. Indeed, there are a number of owner-operators who own Red and Sony. The questions related to windowing of sensor below full resolution, low light capabilities, lower ISO ratings, and idiosyncratic workflows will remain. Verdict: F5 and F55 at these prices points won’t change the Red adherent. Red and Sony NewF are very different cameras with very different applications. Red remains far more suited to cinematic use. Sony NewF has perhaps a broader range of applications.

Bottom line is that Red, Sony and Arri will battle it out in intersecting niches and each will retain users in their respective markets—Red in cinema, Arri in TV and Sony across the board in all markets. Canon has been out-featured by the NewF and even with Canon’s slightly lower pricing, Sony owns that turf.

Here’s the real decision, though. Is the F5 upgrade worth it for F3 users? Can owner-operators achieve a reasonable return on investment or even break even with the price of a fully-kitted F55 with 4K recorder approaching US $40,000? At what point does one choose to rent a camera by the job, or to own? In this case, the technology may be a game changer but the tale will be ultimately told by sticking to a realistic business plan.

What do you think? Agree or disagree? Scroll down to leave a comment.