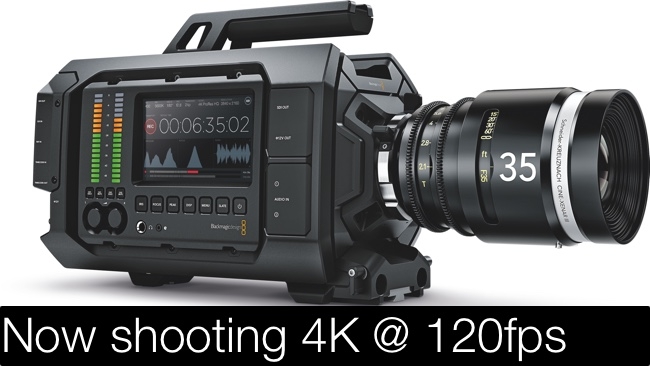 The URSA gets an upgrade

As usual we’re expecting Blackmagic to make a bit of a splash at NAB, but in advance of the main tranche of news it's announced a v2.3 update for its URSA cameras which includes ProRes 444 XQ and 4K at 120fps support. And yes, the latter will require a new sensor.

Details on the availability and cost of the new 4K v2 sensor won’t be made public till after the show, but Blackmagic has confirmed that it pushes the cameras beyond 80fps all the way up to 120fps, which will make all current owners glad that they bought such an upgradeable machine. The 150fps HD window, meanwhile, lifts the camera up into the realms of super slo-mo units, and it’s not too hard to see the advantages that technology might bring when ported across the company’s range.

As usual, you can read the full release on Page 2.

This new software update is available now to download from the Blackmagic Design support web site.

Since its introduction, Blackmagic URSA has been used on multiple television commercials and feature films worldwide. These high end customers have provided some great feedback on features most needed and this free software update incorporates many of the requests.
The new “window mode” allows customers to select up to 150 fps for allowing slow motion effects and other creative cinematography. The window mode keeps data rates lower, even when running at high frame rates because it does not use the whole 4K image sensor, but takes a 1920 x 1080 resolution window from the center of the sensor. This allows the camera to capture to higher frame rates than possible when using the whole sensor.

The new ProRes 444 XQ codec allows Blackmagic URSA cameras to record into the highest quality ProRes format and this allows incredible compatibility with both DaVinci Resolve and also Final Cut Pro X. ProRes 444 XQ is ideal when you need extremely high quality, but also need compatibility with a wide range of software that might not handle RAW files.

This software update also allows recording RAW to two CFast 2 cards simultaneously. This allows every second RAW frame to be sent to alternate CFast 2 cards so the recording data rate is doubled in comparison to using a single card. Because CFast 2 cards are extremely fast, being able to use two of them at the same time when recording allows extremely high data rates, which is vital when recording RAW. Because the frame rate is not fixed in RAW files, this means shooting RAW is ideal for high frame rate shooting and is more flexible when customers need to change the speed of the clips during post production.

This new Camera Update 2.3 also adds support for a new version of the URSA image sensor that allows higher frame rates. This new 4K v2 sensor is now rolling out in new URSA cameras and allows high frame rates full resolution 4K of up to 120 fps. This means customers can now go beyond 80 fps and up to 120 fps when running high resolution. Because Blackmagic URSA is user upgradable, this new sensor will also be offered as an upgrade so customers can increase the frame rate of their URSA cameras if required. Details on availability and cost of this 4K v2 sensor update will be available late in April.

“We are extremely happy to make this software update available free of charge for URSA customers!,” said Grant Petty, CEO, Blackmagic Design. “Blackmagic URSA customers have been giving us some great feedback on features they would like to see added to the camera and because URSA has so much power, we have been able to say yes! We have added these new features and there is more to come so we cannot wait to see what our customers do with this new update when they get the chance to use it in production!”