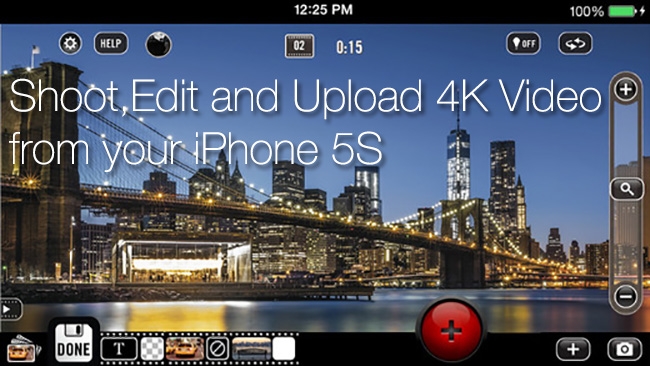 Michael Zaletel is a RED Camera user but he also writes apps for the iPhone. He has recently released an App that will let you shoot and edit near 4K Video on an iPhone 5S, for $49.99

When I first wrote this article the app was being sold as able to shoot 4K but I think there may have been some challenges.

The App is now called Vizzywig 8xHD and is available on the App store. The 8xHD refers to the fact that it is capturing frames at 3264 x 2448 pixels per frame, which is roughly 8 times larger than 1280 x 720 which "According to SMPTE 292M, 1280x720 is a legitimate HD format for comparison" I think he's pushing it a bit there but it is still nearly 4K

It needs an iPhone 5S with 32GB or 64GB of memory and it runs on IOS7 or above. The App works by shooting stills at 24 frames per second and simultaneously recording audio. You can then edit your footage in the App, add transitions, titles and credits and then render it for upload to YouTube or Vimeo, all on your phone.

Apparently the latest version can shoot at up to 30fps on an iPad Air 2.

The App was originally released at a price of $999.99 which caused quite a stir but I don't think he had many takers. Why would anyone pay $1,000 for an App? Well, Michael said: "The reality is the world's fastest full 4K workflow. Pull a small phone out of your pocket, shoot four or five true 4K clips, trim, rearrange, add transitions, lower thirds, titles and credits in 4K and export and upload to YouTube or Vimeo in 4K in 15 minutes without ever touching a data card, laptop, mouse or NLE. We have all spent more than $1K on a single data card and 10 times that on a single lens or tripod."

Apparently IOS 8.1 and the iPhone 6 are not yet supported because of the way the iPhone camera now takes pictures in "burst mode" but hopefully there will be a workaround for this soon.

From the App store:
PROFESSIONAL FEATURES

Until now, 8MP motion picture movie capabilities have only been available to professional film-makers and others who have been willing to shell out several thousands of dollars for the proper equipment, and invest in the hundreds of hours it takes to shoot, edit, and publish these videos over and over again. Don't let your YouTube videos, home movies and independent films become obsolete. Whether you are a father, a mother, an independent film-maker, a YouTuber, or just someone who likes to shoot awesome videos, this is truly the app for you.

Although he seems to have pulled back on the 4K it is certainly an impressive achievement to get such high resolution shooting and editing on a device in your pocket.