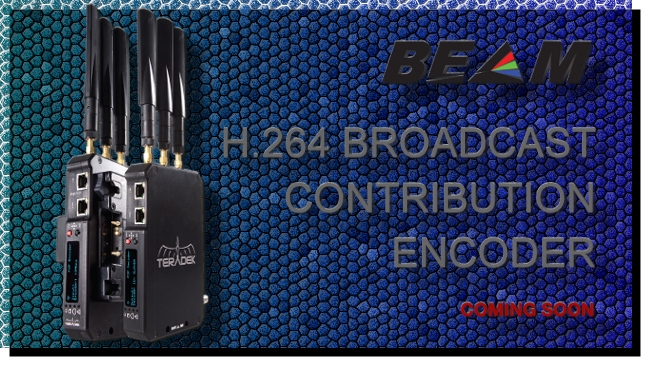 One of the most impressive new technologies announced at IBC, the Teradek Beam allows you to add some serious distance to your productions.

Newly announced at IBC, the Teradek Beam looks set to revolutionise outside broadcast. It can not only send very high quality Full HD video signals wirelessly over the unlicensed 5GHz band (back to the outside broadcast van or a similar control centre), but it also features a bi-directional IFB channel which allows the news operation centre to communicate directly with the camera operator in the field, using that same wireless connection. It’s kind of two solutions in one little box, very handy.

Not only that, but unlike backpack broadcast solutions, the Terradek Beam sits neatly on the back of the camera, providing either a V-Lock or AB Battery mount. Of course, the downside is that it does not provide cellular bonding, as some of Terradek's other products and the 'Live U' backpacks do. On the other hand, it does provide an old school wired ethernet socket, so that it can patch directly into wired networks, in addition to its wireless abilities.

It has a Latency of just 2 frames per second and communicates with the camera over SD-SDI, HD-SDI or even 3G-SDI.

I suspect that these straightforward little black boxes are going to be seen on a lot of broadcast cameras in the near future.

For more details check out the Teradek site here.