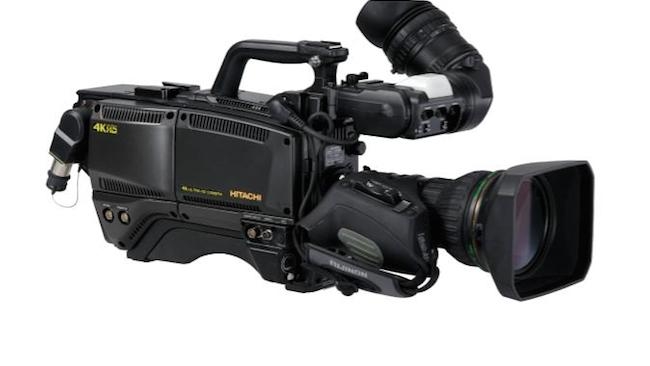 Hitachi Kokusai Electric has taken the wrappers off the SK-UHD4000, a broadcast 4K Ultra-HDTV camera system which rather importantly can use the standard 2/3-inch B4 mount lenses associated with current HD broadcasts.

The use of standard HD lenses with the SK-UHD4000 eliminates the need for special conversion adapters and drops the cost of 4K productions considerably. It will allow broadcasters to effectively use their existing lenses and shoot video in 4K resolution, while at the same time retaining the easy handling and operability of the current fleet of broadcast cameras. It’s going to find a particular home in live sports OB, mitigating some of the problems that have somewhat marred the move to 4K in the field such as sensitivity and depth of field.

The SK-UHD4000 is equipped with a newly-developed 2/3-inch MOS sensor, which is bolstered by high-precision lens bonding methods and original video signal processing technology to produce the 4K resolution. The CCU is a compact 2U, making it a good fit for OB trucks, as does a camera head power consumption analogous to HD units and pegged at 38W. It can also output HD and 4K video signals separately, making it ideal for dual-format productions.

And perhaps more to the point it signals that Hitachi is taking 4K not only seriously, but is also executing its involvement rather well. Sony and Grass Valley units currently comprise the majority of the world’s HD OB camera fleet, but the move to the new resolution means that everything is to play for and this is a rather good opening gambit.