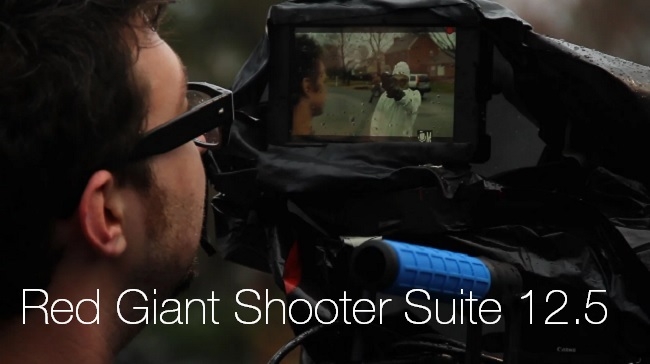 Red Giant have released a new version of Shooter Suite, their bundle of tools for on set use, including updated versions of Bulletproof, PluralEyes and Denoiser

The past few years have seen an explosion in video production because of the affordability of new cameras at HD and even 4K resolution. It is now easy for anyone with an idea to pick up a camera and shoot it. However, as many people discover, shooting your film is just the beginning. Managing media from multiple cameras on location, dealing with sync issues and delivering the correct file formats for editing are constant problems.

Red Giant create software for Colour Correction, Keying and Visual Effects which are indispensable in Post Production, but they also have tools which help to bridge the gap between the shoot and the edit and they have bundled them together into their Shooter Suite.

Shooter Suite 12.5 contains the latest versions of 6 tools which will help anyone get their media safely to the edit and speed up the editing process. The tools are:
BulletProof 1.2
PluralEyes 3.5
Denoiser II
Instant 4K
Frames 1.1 and
LUT Buddy

BulletProof 1.2 is the latest version of Red Giant's On-Set media management software. It allows you to make multiple copies of your media to multiple destinations simultaneously and can transcode into the required delivery formats. All copies are bit-for-bit accurate to ensure the safety of the media. Clips can be organised into folders and marks, keywords and other metadata can be added during the transfer process. Footage can be viewed to verify you got the shot you wanted and you can even add "in" and "out" points ready for the edit. BulletProof can now send media directly to PluralEyes.

PluralEyes 3.5 handles one of the biggest issues when shooting and recording audio with multiple devices, synchronisation. Traditionally picture and sound sync has been dealt with manually using clapperboards or by using timecode, but even then it is easy to run into problems. PluralEyes can take a collection of video and audio files from the shoot, analyse the audio on all the clips and then synchronise them automatically so you can bring them into your editor ready to start cutting. What might previously have taken days can now be achieved in a matter of minutes.

Denoiser II reduces noise and compression artifacts in video footage and helps to clean up your images. It works as a plugin and is now GPU accelerated to provide faster processing. Denoiser's basic settings will deal with most common situations but if necessary you can fine-tune the settings and even deal with colour channels individually.

Instant 4K is an upgrade to Red Giants Instant HD software. It works as a plugin for Premiere or After Effects and allows high quality upscaling of footage up to 4K resolution using intelligent algorithms to deal with field blending and motion blur.

Frames 1.1 allows you to convert material that was originally shot on interlaced formats into progressive with intelligent adaptive de-interlacing and scaling.

LUT Buddy is a free tool that lets you Import, Create and Export Look-Up Tables in formats compatible with most colour grading applications.

Most of these tools are available individually but the Shooter Suite bundle gives a significant cost saving over purchasing them seperately.

Shooter Suite 12.5 is available for $399 or as an upgrade from previous versions for $99. If you own any of Red Giant's other packages such as Magic Bullet or Colorista you can buy Shooter Suite for $199

Check out this video to see what Shooter Suite can do for you: