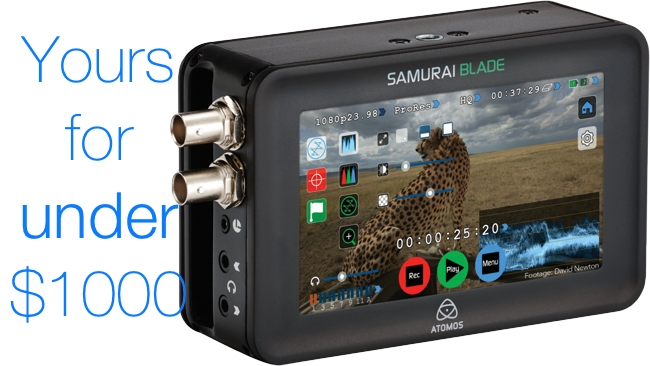 Atomos has announced a new $995 price point for its Samurai Blade, reckoning that with both of its HDMI and SDI monitor/recorders now under $1000 the days are numbered for monitors that don't record or playback.

Launched at NAB 2013 the Samurai Blade was the first Atomos monitor to include the SuperAtom IPS screen – billed as “super sharp, super bright, super blacks” – as well as full waveform functionality, making it both a monitor that records and a recorder that monitors. Waveform monitor functions include vectorscope, RGB and LUMA parades with transparent overlay and bottom right, and lower 3rd or full screen positioning.

NY film producer Chuck Fishbein at Crazy Duck Productions is a fan: "When I am filming Manhattan in 4K, I use the Blade to simultaneously create HD ProRes HQ files, which saves room on the camera's SXS cards, while delivering a file ready for editing,” he says. “4K is coming, but not everyone wants it right now, so, being able to deliver footage in the ProRes HQ format, while archiving the 4K makes my workload a bit less, while still setting us up for the future.”

Atomos is promising some interesting announcements at IBC too. Watch this space…