Breaking news: All you need to know about Sony's new "F" cameras 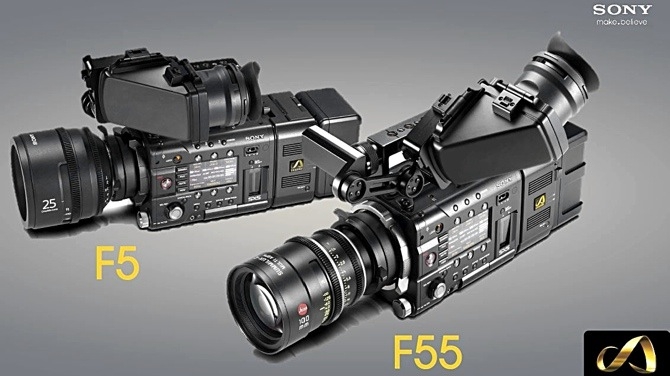 After two weeks of teasing, the NewF is here. And the big surprise is that the NewF is not just a camera but rather an entire ecosystem. Ned Soltz, our NY reporter, brings us the details.

Here’s a quick overview of the product line. Check back here for ongoing detailed coverage.

The NewF is anchored by two new cameras, the PMW-F5 and the PMW-F55. Both cameras share modular designs, PL mount lenses via the same PL to FZ adapter on the PMW-F3, multiple codecs, more convenient menu display, and the ability to accept all the newly-announced accessories.

The PMW-F55 shares the same color filter array as the top of the line PMW-F65 as well as incorporating a similar global electronic shutter to eliminate the rolling shutter issues found in CMOS sensors. It adds to the F5 up to 180 fps in XAVC 4:2:2 HD and internal XAVC 4:2:2 2K up to 240fps as well as 4K with frame rates up to 120 fps. The F55 supports both QFHD for no-cropping to 4K for televisions as well as full 4096x2160 4K in the XAVC codec.  It likewise will output 16-bit linear raw files in 2K or 4K to the R5 recorder. The F55 will monitor 4K via 3G HD-SDI. The F5 does not monitor 4K.

Both cameras have a removable top handle with multiple mounting points.

Menu choices and display are greatly enhanced by side camera LCD display showing all current settings.

The basic cameras ship without viewfinders. Three viewfinder options are also introduced. The DVF-EL100 is a .7 inch OLED 1280x720 viewfinder. The DVF-L350 is a 3.5” LCD viewfinder with flip-up hood with a resolution of 960x540. Finally, the DVC-L700 is a full 1920x1080 7” LCD viewfinder monitoring HD, 2K and 4K to a 1920x1080 canvas. These viewfinders have multiple mounting options and plug into dedicated ports on the camera.

Sony also introduces SxS Pro+ cards in 64 and 128GB capacities for XAVC acquisition from HD to up to 2K/4K depending upon camera capability. These cards may be read in the USB3 card reader announced by Sony at IBC 2012.

The R5 2K/4K recorder works with the FS-700 (here’s the 4K path for the FS-700) as well as both NewF cameras. It records via 3G SDI to Sony’s new AXSM cards, which can be read via a new USB3 reader. The R5 attaches to the back of the F5 or F55 in keeping with the products’ modular designs and connects by the available SDI ports. Sony sources indicate that the R5 recorder will be priced competitively with other 4K products on the market such as the AJA KiPro Quad or Convergent-Design Gemini to mention to examples.

Not to be overlooked is the 14 stops of dynamic range common to both cameras through Sony’s Slog2 gamma.

Mounting options include an accessory ENG-style under camera shoulder mount with two ARRI rosettes for mounting handles or other accessories as well as sockets for 15mm rods.

Finally Sony has introduced a completely new line of PL mount lenses with 4K optics and metallic rather than plastic construction. The lenses are T2 across the line and the cameras can be bought either without glass or in two possible kit combinations. The 3-lens kit includes 20mm/25mm/135mm glass while the 6 lens kit includes 20mm/25mm/35mm/50mm/85mm/135mm lenses. There has been no announcement whether these lenses may be bought individually.

Sony introduces with these cameras the XAVC codec. This Sony design is based upon MPEG-4 H.264 Level 5.2 encoding and records I frame files from 720p through 4K (depending upon camera capabilities) at 4:2:2 color sampling with data rates as mentioned above. Sony has entered agreements with vendors of some 14 NLE, Color Correction, Dailies and other applications for support of the codec. These include Apple (FCP X), Adobe, Avid, Grass Valley, Quantel, Scratch, Matrox, and others.

Yet another component of the NewF is the 30” 4K LCD monitor displaying up to 4096x2160. It has a 10 bit panel and connects via either HDMI 1.4a or 3D/HD-SDI x4. The monitor can accept 4K output directly from the PMW-F55 for real time 4K monitoring.

As a final part of the NewF strategy, Sony also announced a future firmware upgrade to the PMW-F65 due Spring 2013. It will allow producers full access to the 8K, 20 megapixel sensor of the F65. 6K is possible as well as Advanced de-mosaic (rather than Debayered) 3.75:1 anamorphic 8K x 2K signal.

Pricing for all products will be announced closer to the anticipated shipping dates of February, 2013.

Sony's new 4K products: what does all this mean?