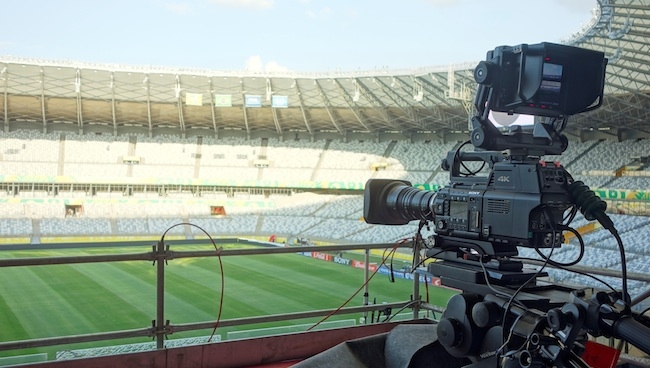 Following over a year of tests that started at last summer’s Confederations Cup, three matches from the FIFA World Cup in Brazil — including the Final - are to be captured in 4K 60p, with Sony and host broadcaster HBS working together to produce a 4K feed. Here’s how they’ll do it.

Four years is a long time in the broadcast industry. Back in 2010, Sony was limbering up to produce 25 matches from the South Africa World Cup in stereo 3D as a way of igniting interest in the format. The fact that not a single frame of a single match will be captured in stereo 3D at the World Cup this year shows that the effort pretty much failed.

By comparison, the 4K effort for Brazil 2014 seems relatively small scale: a mere three matches being captured in the format, all from Rio’s Maracanã Stadium, which is big enough to accommodate the additional camera positions on top of the 37 cameras HD production without too much seat kill.

The matches will probably represent the most comprehensive coverage afforded a 4K production yet though, with 12 Sony F55 cameras equipped with Fujinon lenses slated for each game (by contrast the Confederations Cup utilised only six). An F65 is on standby to work at 120fps and provide slo-mo, though this is a largely untried solution and may or may not make it through to the final feed. The production will also have access to down-converted 8K from the handful of Super Hi-Vision cameras recording the games for Japanese broadcaster NHK.

The Telegenic truck that was shipped from the UK to Brazil last year and which has been responsible for much of the heavy lifting on the 4K trials to date isn’t available this summer, so while the UK OB specialist is providing the majority of the experienced crew to work on the production, they will be working in a newly refitted 4K-capable Globocast truck. The whole project is using the Sony flavour of XAVC.

“We can get a match in under a terabyte,” says Mark Grinyer, Head of Business Development for 3D, 4K & Sports at Sony, speaking from the IBC in Rio.

In truth there are two separate 4K projects going on out in Brazil: the live one which is being transcoded into HEVC and then beamed on to interested broadcasters such as the BBC (see below) via the Eurovision satellite network; and a post-oriented one which will be cutting highlights packages using a Quantel Pablo Rio. These will be then distributed via Sony’s own internal distribution network to around 3000 Sony stores worldwide so that people can see football footage in all its 4K glory — and presumably buy a set at the same time.

The highlights will also be used for a 4K version of FIFA’s official tournament round-up (which is presumably going to get an online release after the final via the likes of Netflix). This will also fold in footage captured by five F55-equipped roving crews working at the tournament.

“The match direction leans more towards the 3D model at the moment, as the eye needs time to process the amount of information in the same way” says Grinyer interestingly. “We cut slower to let the viewer see more, but also some of our cameras will shoot wider than you would expect them to in HD. It’s far more like the way that you would watch football if you were there individually.”

The BBC broke cover before the tournament started as the first looking to broadcast the 4K feed, albeit only to private audiences in London and Manchester (public screenings were discounted due to logistical issues). The incoming 4K feed will be distributed simultaneously using both IP (via BT) and digital terrestrial television (via Arqiva). This is, as far as we know, a world’s first, and it will be interesting to see which, if any, of the delivery mechanisms has the edge.

For all its acknowledged cutting edge research, the BBC tends to take a cautious approach to actually deploying new technologies as it has a publicly funded remit. This has worked in its favour in the past, the Corporation only ever really dabbling its toes in the stereo 3D water, for instance, with test transmissions involving Six Nations Rugby and Wimbledon tennis. However, 4K delivered over spare capacity of the established DTT infrastructure would be an important component in defusing criticisms of rolling out an elite service for early adopters.

While the BBC has made noises about 4K before, and indeed has been instrumental in conducting 8K tests in the past with NHK, this seems to mark a more serious stage of commitment. Indeed, BBC research and development controller Matthew Postgate, quoted in UK trade paper Broadcast, talks of a strategy manifesting itself over the next 12 to 18 months. That would imply getting a 4K broadcast solution of some sort in place in time for the Rio 2016 Olympics.

Work still to do

There’s work to be done to make that sort of broadcast prospect realistic yet though.

“The really interesting thing now is to look at how live production can combine the two platforms, HD and 4K,” says Grinyer. “We had some success doing that with Sky and 3D and HD, so the next step is to see how well you can take a 4K production and make both a 4K and an HD product out of it.

“The World Cup final with half the world watching is not the time and the place to start playing with the HD feed though,” he continues wisely. “But as we get into the next European football seasons we’ll start to see people playing with those workflows; shooting in 4K and producing an HD production straight off the back of it.”

There are still technical challenges to be overcome — the different cutting requirements will be challenging in a live environment and might possibly need two trucks, or at least two discrete areas within one rather big one, to pull that off. But if set up properly 12 4K cameras should be able to give you around double that number of HD camera positions as the HD frame can be ‘flown’ around inside the 4K one, and 20+ cameras is respectable for most modern stadium sports.

Either way, it will be interesting to see if the Sony/HBS 4K production can indeed make the beautiful game even more beautiful...