Shooting on the Arri Alexa in a 4K UHD future 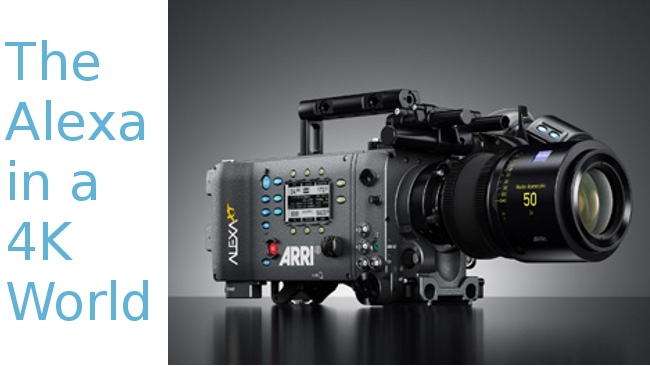 Think the ARRI Alexa only does HD? Think again!

There were a lot of rumours flying around about a new 6K camera from Arri to be announced at NAB this year, but of course there was no new camera from Arri. They're probably busy enough dealing with sales of the Amira which is presently flying off the shelves. So in the absence of a new camera, where does the present Alexa fit into the new world of UHD “4K”?

People often think of the Alexa as being a HD camera due to the immense popularity of the 1080p ProRes Log-C mode but of course if you are shooting Arri Raw there are actually much higher resolution modes available to you. It’s not uncommon for movies shot for the cinema to use the 2.8K 16:9 arriraw mode (2880 x 1620) or even to use anamorphic lenses and shoot in 2880 x 2160. Apparently Skyfall was even shot on spherical lenses at 2880 x 2160 so they could extract both the 2.39:1 aspect ratio in regular cinemas and the more boxy 1.90 aspect ratio in digital IMAX cinemas.

What’s more there is another not much spoken of mode on the Alexa. This is the “Open Gate” mode that is available on the Alexa XT and above. It uses the full resolution of the Alexa sensor. The reason that it is not much talked about is because it is a rather awkward aspect ratio of 1.55:1. This is basically 14:9 which would have been really useful back in the days when the BBC were insisting on 14:9 deliverables in the transition to widescreen television but these days, not so much. 14:9 is a great compromise format between 16:9 and 4:3 because you lose about the same resolution if you crop to 16:9 as if you crop to 4:3. Of course these days that makes it neither fowl nor fish! I mean if you are going to crop the sensor to either of those aspect ratios you might as well just shoot in the 16:9 or 4:3 modes, unless you are looking to protect and extract for both aspect ratios but these days I suspect there aren’t so many people doing that any more. The world of 4:3 has been largely left behind for most people.

So the “Open Gate” mode on the Alexa is very frustrating. At 3414 x 2198 it’s tantalisingly close to the 3840 x 2160 of UHD. Theres just a 0.4K difference. However, unless you are shooting to release in the rather weird 14:9 aspect ratio of “Open Gate” mode it would appear to be a bit useless. There IS one big exception though and that is if you are shooting chroma key! When shooting chroma key (green screen for example) the aspect ratio of the camera is a lot less of an issue as you can capture your data within the confines of the camera aspect ratio and then key in a background that is of the desired final aspect ratio! Thus you could shoot in 14:9 and finish in 16:9 without any cropping. You could even shoot 3414 x 2198 and import it into a 3840 x 2160 timeline for editing such that the final finished movie would be a genuine 3840 x 2160 without any uprez.

Another possibility, albeit rather untested so far, might be to use 1.33x anamorphic lenses in combination with “Open Gate”. This wouldn’t give you a 2.39:1 aspect ratio but something a bit narrower. I’m guessing something a bit closer to 2:1 without any cropping? Could be interesting for someone to try! Might be a great look if a little unconventional. If you could track down some 1.5x lenses you could also shoot for a 2.39:1 aspect ratio in this mode without cropping but 1.5x lenses are not easy to find sadly.

I guess you could also shoot in “Open Gate” mode for re-framing in post as well which might be useful if you were shooting wildlife or something else unpredictable, but obviously I would encourage you to shoot to get it right in the camera for most purposes!

I think it’s a bit of a shame that these higher resolutions aren’t available as ProRes recording modes given the immense popularity of working in ProRes. Perhaps that could be an Alexa software update for the future?

Check out this video by Michael Cioni from “Light Iron” who has similar ideas. In this case looking at the 2880 x 2160 mode in conjunction with anamorphic lenses. Obviously if you are working in a 2.39:1 aspect ratio for a UHD screen you don’t need as much resolution to start with as you won’t be using the full screen area and hence not all of the pixels so it could be a great match for UHD screens.