The Foundry takes the wraps off Nuke Studio 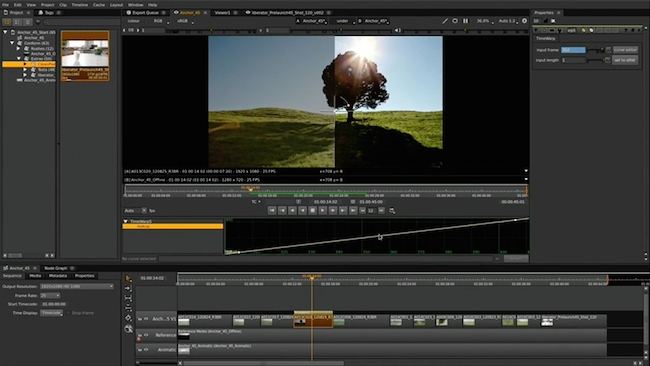 Is this the future of VFX?

It's early days and details are slight, but The Foundry's Nuke Studio is making a serious play for high-end effects work domination with its plans for a single application covering VFX, editorial and finishing.

Nuke Studio will build on the company’s highly-regarded compositing tool Nuke, and promises to draw on its existing compositing, conforming and shot management technology, as well as adding a host of new features and functionality. It's going to be node-based and is pitched at both individual artists -- enabling them to complete end to end projects -- and collaborative teams working on quick turnaround projects via a hub that allows versions and annotations to be quickly shared.

Here are the highlights:

Combined timeline and node-graph workflow lets artists work the way they want with all the power to create a project in one app from start to finish.

A hub for total project control lets artists share scripts, work collaboratively with annotations and version up and down with ease.

GPU accelerated effects can be added right in the timeline, letting artists quickly experiment, polish and achieve the high-end look they need.

Built-in render farm functionality automatically uses all available resources to enhance speed and performance, either on a single machine or when connected to multiple.

If they can pull it all off and make it work out of the box, the company could have a hit on its hands. Certainly the concept of it alone has been enough to send an expectant shiver through the VFX community. Expected release is later this year.