Grass Valley: A 4K 2/3" camera that takes B4 mount lenses 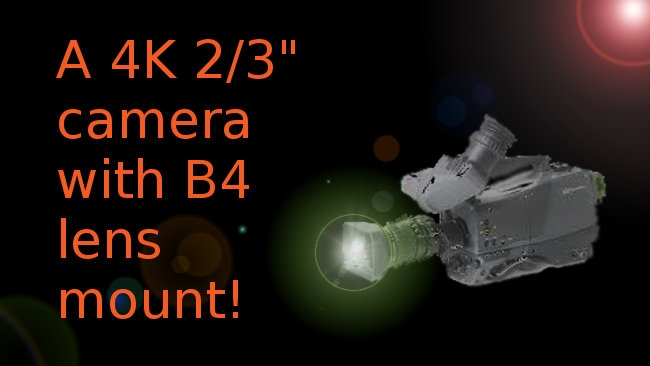 The missing link: A 4K 2/3" camera is key to live 4K production, particulalry in sports, but till now no-one has stepped forward to make one. All of which makes Grass Valley's forthcoming 4K LDX camera rather significant.

Until now 4K cameras have been focused on the movie and drama market and have had large sensors and PL or stills camera lens mounts (such as Canon EF or Nikon F mount), but this new camera is able to accept standard B4 mount lenses as are common in the broadcast sector. It’s a 3-chip camera designed with a 2/3“ frame in mind so you don’t have to lose resolution to both sensor cropping or optical adaptors as you do on other 4K cameras. There’s also no loss in sensitivity due to additional optics either as none are needed.

Grass Valley has 4K sports production in mind for the unit, but given the fact that it is now first out the gate with a 4K 2/3“ camera it could be that it will be very popular in other areas too.

This is one of the key missing parts in the 4K puzzle. The camera also features another missing key part in that it can output 4K video live. It’s only recently that live output capability has been made available on larger sensor cameras such as the Sony F5 or F55 so this is also very welcomed.

The camera will complete Grass Valley's end to end 4K workflow, meaning all the pieces are finally in place for 4K broadcast workflows in general. Of course 4K broadcasting itself still needs a lot of work at the actual transmission end of things, but pre-transmission the technology is now all here.

Of course there are still people out there waiting for a 4K 2/3“ camcorder and this camera is more directed at live output to a switcher, or something similar, as opposed to recording in the camera itself. So there is room in the market for another 2/3“ camera yet, but at least we now finally have the first one! Or in any case we will have the first one after Grass Valley tests the camera with its leading customers in "the high end sports market" this summer (the company is currently declining to name an actual release date).