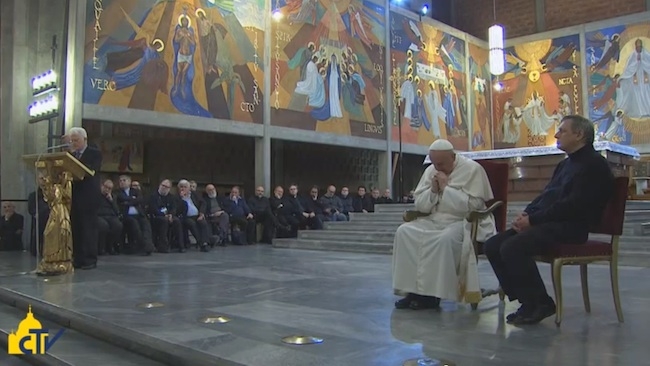 A forthcoming ceremony to mark the canonisation of Blessed John XXIII and John Paul II will take place on 27 April in St Peter's Square, Vatican City, and will be broadcast in 4K using six Sony PMW-F55 cameras.

The event will be produced by the Vatican Television Centre (CTV) and is the latest in a long instalment of technical collaborations between Sony and the Holy See, which has an admirable (if somewhat surprising) record for nudging up against the boundaries of broadcast tech. The ceremony will be screened live in 4K at the Paul VI Audience Hall in the Vatican and, somewhat unusually for a high profile event nowadays, there will also be a live 3D broadcast of the event in Sotto il Monte Giovanni XXIII, the birthplace of Pope John XXIII.

The 4K filming will take place in six locations in a studio set-up in St Peter's Square, using a PMW-F55 camera system connected to a 4K-ready OB van. The position of the cameras and the choice of lenses were examined and chosen under the technical direction of CTV, who wanted to co-ordinate filming formats while thinking carefully about the integration between 4K and HD.

Certainly, as far as we can recall, it’s one of the very few events to be captured in 4K, HD and 3D simultaneously.

As well as the F55, a Sony MVS-8000X video switcher will also be used in Sony’s 4K Live Production System, along with a 30-inch professional PVM-X330 LCD 4K monitor system and the new PWS-4400 4K server. The production will take place with the support of DBW Communication, which will be providing an OB van which has been upgraded go 4K specs specifically for the ceremony. The signal will be transmitted via a Eutelsat satellite.

“This production will be an important test case for the excellent benefits that 4K offers, as well as providing a chance to demonstrate its impact through a real production,” said a statement, before rather bizarrely going on to state that: “It will also serve as rehearsal for the FIFA 2014 World Cup final, which will take place on 13 June in Rio de Janeiro, Brazil, and will be filmed in Ultra HD.”

Quite what a papal ceremony and a World Cup final have in common is open to question. But the Vatican is pleased with the new technology anyway.

"The production of 4K content is a field that the Vatican Television Centre is very interested in, and we are focusing on the development of this new production technology", stated Monsignor Dario E. Viganò, Director General of the Vatican Television Centre. “4K is an excellent technological resource that helps us fulfil a significant part of our mission: to accurately document and preserve images of the Ministry of the Supreme Pontiff and the activities of the Holy See in high quality and for as long as possible.”