Our first full review of the Blackmagic 4K production camera 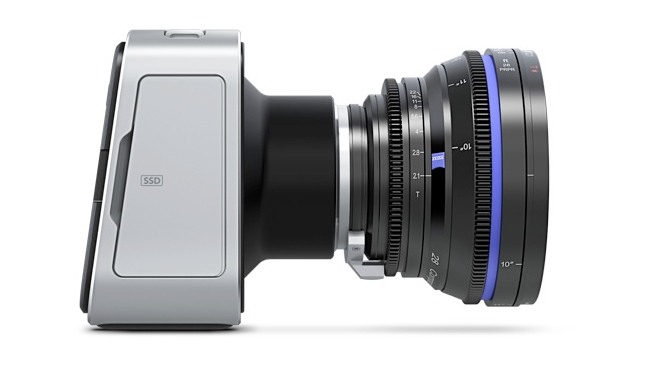 The 4K Production Camera is a camera that has been on the radar of many a camera owners mind since it was announced last year. Amongst the promises were 4K resolution, naturally, and a global shutter. All for the price of a couple of decent DSLR lenses.

A recent price reduction has pricked the ears of many more potential buyers who are now eager to find out what the camera can do for them. So what do you really get for your £2,000?

The camera body is the obvious inclusion, along with a full version of DaVinci Resolve, a charger, a shoulder strap, a screen sunshade, and... well that’s it really.

What struck me most when I took the camera out of the box was its size and weight. The Production Camera certainly can’t be accused of being shoddily built! It is made of metal, and it is built to last. There are three screw attachment holes on the top of the body, a standard tripod plate hole on the base, and various ports on the side covering audio input, 6G-SDI out, Thunderbolt out, headphones, and power input.

Once you attach a lens to the camera there is one thing that stands out more than anything else. This is a camera that is designed to be used within a cage and with other accessories bolted to it. It is initially inexpensive because you are effectively purchasing a sensor block in a box. At the very least you will need to budget for a cage, an external battery power system, a decent EVF, and an XLR audio input box. You may also need a new lens system, but more about that later. If you already own such accessories then the purchase decision will be made a lot easier.

The styling is a bit of a love/hate affair for me. On the one hand it is beautiful in its simplicity. It could have been designed by Braun. On the other it is a bit, well, retro! The front of the body has a single big red button to start and stop recording, which adds the to the 70’s feel of it. Without a cage it looks a very odd beast indeed.

The large touchscreen LCD on the back of the camera is large, bright, and responsive. In strong sunlight it is difficult to view, but you need to remember that this is not really the primary way you should be framing your shots. A double tap zooms the image to allow critical focusing. A single tap brings up the metadata screen allowing very fast and convenient input of shot descriptions etc.

A thin strip at the bottom of the screen displays f/stop, ASA rating, shutter angle, timecode, and other data. A button at the top right of the screen allows toggling of a coloured focus assist peaking, which works out very well. The screen is actually very good for focusing, and I found it to be accurate for the purpose.

Several buttons line the underneath of the screen allowing playback of clips, entry to the setup menu, and the all important power switch. They are all big and responsive.

I won’t go into the full scope of the setup menus, but there are three important settings. The recording modes, the screen display mode, and the ASA rating.

You have the option of recording in “Film” mode or “Video” mode. The RAW recording option is not available just yet,and will be added with a firmware update at a later date. “Film” mode records to Apple Prores using a LOG gamma, resulting in a wider latitude quantised into the 10-bit range of the codec for better grading options.

“Video” mode records to the REC709 standard. This will reduce post adjustment options but would be used where working fast is more important than going through a grading process.

The review camera was supplied with a couple of high quality Sigma DSLR lenses. The system was designed with EF mount lenses in mind, and so it seemed logical to try it with these first.

It is at this point that you will most probably make the realisation that using such glass isn’t the best of ideas. The camera has no way of riding the iris smoothly with such lenses. There is one button that sets the exposure automatically. In Video mode pressing this will set the exposure based upon the average light in the shot, while in Film mode it will expose for the brightest highlights and let the shadows take care of themselves.

It is possible to set the exposure manually yourself by using the shuttle buttons below the LCD display, however this still means that riding the iris smoothly is not an option. This issue was soon solved by swapping out the modern glass for some older high quality primes with a manual iris control on the barrel.

Setting the exposure entirely for the highlights needs to be approached carefully. The camera has a native ISO ratingi of 400.  In good light it is fantastic, but the lower mids and shadows do suffer somewhat. Therefore exposing entirely for the highlights does not guarantee that you can cleanly lift the darker areas later - In Prores modes at least.

Reducing the ASA setting makes things less noisy, but you need to be careful that you do not do this at the price of dynamic range. In other words reducing the ASA to the minimum is the same as using negative gain on a normal video camera. Care needs to be taken. It would be a much better plan of action to perform some controlled noise reduction in post.

We spoke to Blackmagic about this and their answer was illuminating. Essentially, they say that they do not provide noise reduction inside the camera to deal with lower light conditions. This is because they provide Resolve to carry out this processing. In effect, they've abstracted this function from the camera into the software application. When there is access to the raw footage, Resolve's processing should have a powerful effect on image processing.

The real test will come once RAW recording is enabled whereby the limitations of cramming the available dynamic range into a gamma curve is eliminated, particularly at the extreme end of things, so until this can be tested the real capabilities of the camera are not known.

Start up time on the camera is very fast. The camera does have an inbuilt battery, but this does not have a hugely long runtime. Therefore an external battery system or mains powering should be considered as a matter of priority. The charger supplied with the camera gives no indication of whether the batter is fully charged or not. You need to turn on the camera to check the LCD display to see the charge status.

Now, this is all very well, but what can be said of the pictures that the camera produces? As mentioned previously they are a possibly a little more noisy than I would have hoped for, however the camera really does resolve a lot of detail while remaining very natural looking. Distant brickwork on buildings for example is resolved superbly with no aliasing to speak of.

In one example I shot some ships in Gloucester docks, and it is even possible to see the texture and detail on some of the fine sail rigging ropes. I was unable to test the camera against a chart, but it would not surprise me in the least if it was resolving near the top end of the capability of a 4k camera.

Again, as mentioned earlier care needs to be taken with exposure in Prores modes at least. This camera is also not a low light beast. With good light and careful exposure it is capable of producing a very pleasing picture, sharp and natural. It will be interesting to see how much more can be gleaned from it once the RAW update is released.

Shots can be played back and reviewed using the buttons below the LCD display. Double tapping will also zoom into the shots so that you can check for focus. It is a shame that there is no thumbnail display. Instead you have to manually go back and forth linearly through the clips to find the one that you wish to view. Metadata can also be added to a shot after it has been recorded. 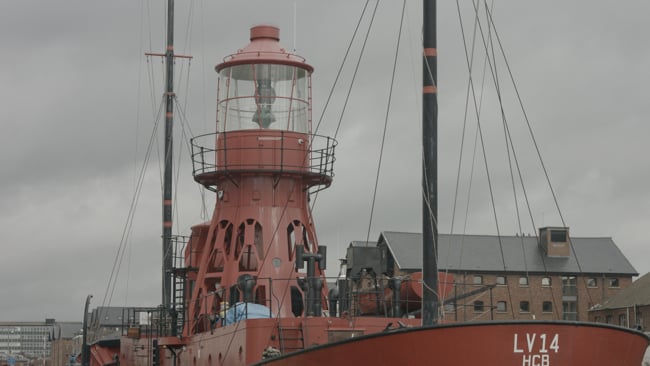 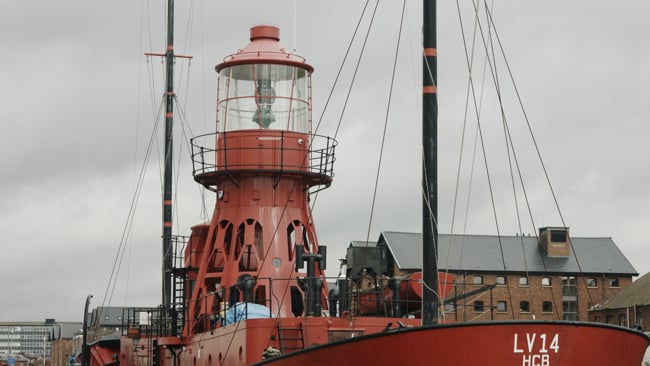 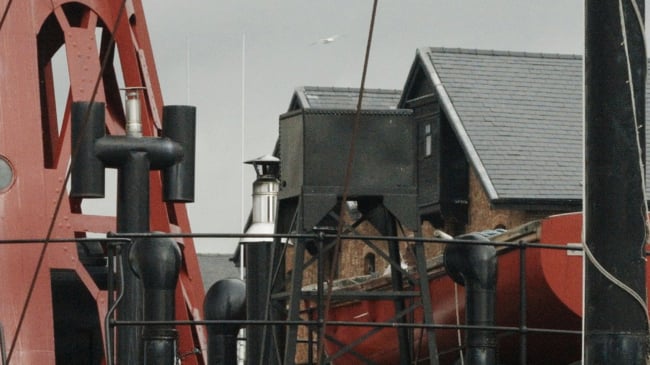 Graded. Note that these frame grabs are JPEGs. You can use these to judge contrast, focus and saturation, but visible artifacts are as likely to come from the JPEG compression as the original image. You can see the detail in the cloudy sky. No sharpening has been applied to any of these images. 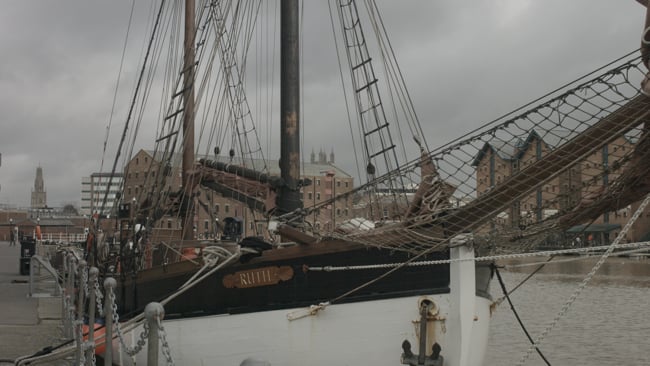 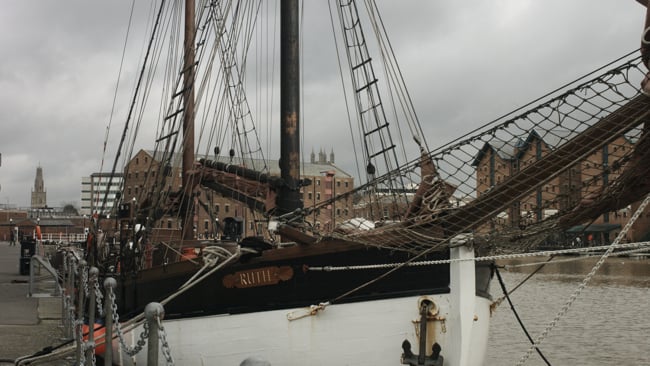 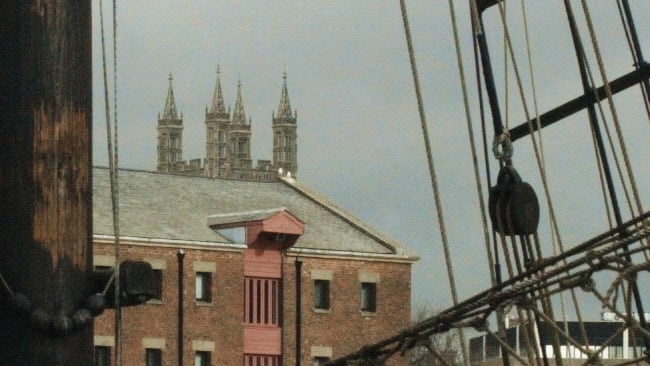 Transfer of files is easy. Very easy. The camera records to standard SSD drives with a SATA interface, so transfers can be made via a Thunderbolt adaptor or even by plugging the drive into something like an Icy Box. Because it records to non proprietary SSD drives it is easy to get hold of extra storage. Speed of transfer for your video files is thereby only limited by the quality of SSD that you use and the interface. You could of course edit directly from the SSD if you so wished.

The Thunderbolt connection on the side of the camera can be used to output waveform and vectorscope displays to a laptop using supplied software. This is quite a clever and useful feature, particularly in a studio setup. I await the day when somebody makes a camera that can send such data remotely to an iPad app.

To summarise I think that many people will produce some excellent work with the Blackmagic Production Camera. It produces a pretty mind blowing picture for the money. However it would be a mistake for potential buyers to think that it is necessarily an inexpensive way of buying into the world of 4k RAW.

On paper it is, and with some frustration you could use an inexpensive DSLR lens and the bare bones body attached to a tripod. However this would not be a realistic way of working. The 4k Production Camera body is a base for you to build on, and you really do need to think about the add ons that you will require to make it into a usable versatile system. With some careful budgeting you could still build a system for less than the competition, but a lot will depend on the type of glass you will be using or already own and how many SSD drives you buy.

The camera is very well built and performs very well, but please do consider the extras that you will need.