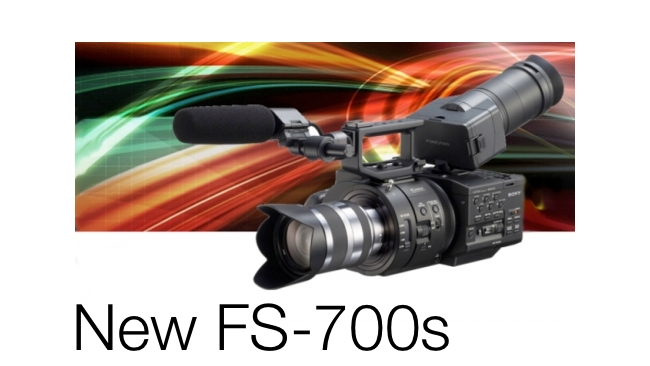 Two new versions of the Sony FS700 have been announced at IBC. Basically they are the same as existing cameras but have the new version 3.0 firmware update pre-installed and thus have both S-Log2 and great low light capability as standard, as well as being ready to add the 4K recording setup that is available for the Sony FS700 right away without having to go back to the factory.

The two versions consist of the FS700R and the FS700RH, with the latter shipping with a zoom lens designed for the camera. The zoom lens includes a built in rocker switch on the handgrip for electronically controlling the zoom. Check out my two previous articles on the FS700 version 3.0 firmware update to find out more about what is new in these cameras:

My article on S-Log2

...and here is the official Sony Press Release:

NEX-FS700RH NXCAM camcorder (The HXR-IFR5 interface unit, AXS-R5 RAW recorder and the battery are shown on the right side of the photo)

“These new camcorders build on the phenomenal success of the NEX-FS700E across a huge range of applications – from corporate production to broadcast television, commercials and movies,” said Bill Drummond, Strategic Marketing Manager, Entry Level Production. “The phenomenal possibilities offered by the Version 3.0 firmware and the NEX-FS700RH’s powered zoom lens further cement the position of the camera as the most highly featured, cost effective creative tool on the market.”

The NEX-FS700R/RH will be available from October through authorised Sony Professional Solution Specialist dealers.

The camcorder’s high-sensitivity and low-noise performance ensures images are bright – ideal for super slow motion shooting that once required large scale equipment. Recording at the faster speeds of 480fps and 960fps is also possible with reduced resolution.

3. Sony’s E-mount system for flexible lens choice
The E-mount interchangeable lens system accommodates the large Super35mm sensor and is ideal for motion picture shooting. Auto Focus, Auto Exposure and Shake Reduction can also be used during shooting. Another advantage of the E-mount-system is its short flange back distance (the distance between the lens mount surface and the image sensor). This enables the mounting of not only Sony’s E-mount lenses but also Sony’s A-mount lenses by using an LA-EA2 mount adapter. In addition, a wide range of third party companies' lens adapters lets professionals use most of their existing lenses such as DSLR lenses for more creative results.

5. 1080p progressive output from 3G HD-SDI and HDMI connector
Native 1080p progressive video signals can be sent from the 3G-SDI and HDMI without a pull-down process, which allows users to capture the uncompressed 4:2:2 1080p onto a compatible external recorder. Simultaneous HD-SDI and HDMI outputs are also possible and both embed Time Code and REC control signals. With the latest firmware Version 3.0 there is now a function which enables a recording to start and stop on a compatible external third-party SDI recorder when the REC button is pressed on NEX-FS700R/RH. In addition, and uniquely to Sony, this function is also possible when using compatible third-party HDMI recorders.

6. Picture Profile function
Picture Profile can change the parameters that determine image characteristics such as gamma curve, black level and colour tone. It allows users to easily try more creative expressions in the field and gives them flexibility over colour grading work. There's also S-log2, a popular gamma mode in digital cinema production, which achieves a dynamic range of 1,300%. S-log2 can not only be applied for monitoring during RAW recording but also for AVCHD recording, taking advantage of the camcorder’s wide dynamic range. Picture Profile parameters and other camera settings can be stored on a memory card as camera profile data. The stored camera profile can then be recalled instantly or can be copied to another NEX-FS700R to assure image tones are matched when using a multi-camera setup.

8. Hybrid recording capability
Attaching an HXR-FMU128 Flash Memory Unit (sold separately) enables HD recording on both the HXR-FMU128 and a memory card at the same time. The HXR-FMU128 can be attached directly to the camera for over 10 hours of continuous recording, making it a powerful tool for backing up important footage onto memory card.

Sony is exhibiting at IBC in the same location as last year, in Hall 12, stand number 12.A10 and also in the central outdoor space. For more information, please visit the Sony IBC2013 website. www.pro.sony.eu/ibc