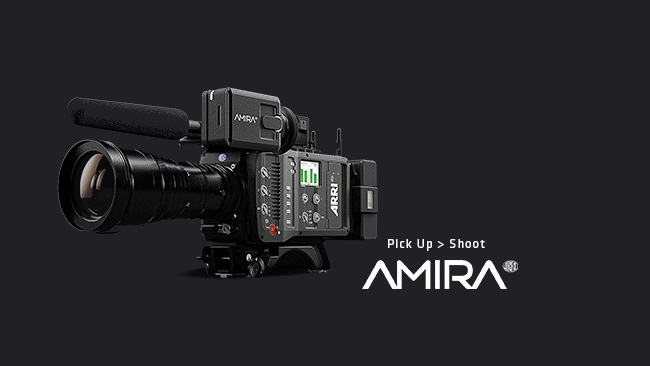 Arri have announced a new camera at IBC called the Arri Amira. The concept seems to be something a bit like Aaton’s D-Minima camera in that it is a smaller camera for documentary use. It’s a quite a bit bigger than the proposed D-Minima concept however. It’s a shoulder mount camera designed to be operated by a single camera operator. It shares the same Super 35mm sensor as the Arri Alexa and can shoot at up to 200fps. It shoots to various Apple Pro-Res formats in REC 709 or Log-C directly to something called CFast2.0 flash memory. Arri are saying that it boots up quickly enough that you can take it out of the bag, and by the time it is on your shoulder, you can be ready to shoot!

Arri are also touting the camera as having “In camera grading”, the idea being that you can just shoot the footage and it is ready to go with a bit of editing, and you won’t need to do a proper grade, a bit reminiscent of the situation with old school ENG cameras. This seems to take the form of a number of 3D LUT’s that are built into the camera, so you can define the look when shooting, although there is of course nothing to stop you from pushing the footage a bit further in a grade after shooting if you wish to do so.

The camera seems to be basically aimed at 1080p production although it can also shoot at 2K as well.

It’s an interesting development. I think the big question might be why a Super 35mm sensor and not 2/3“ but I guess that using the exact same sensor as in the Alexa means it can be marketed as producing similar images a lot more easily. There will also obviously be economies of scale in production with only one kind of sensor being used, and more and more documentary footage is shot with larger sensor cameras anyway these days, but there is a very obvious argument for deeper depth of field when shooting footage where you can't predict what is going to happen at any moment.

With the Arri name and the much touted Alexa look, it’s hard to imagine this camera won’t be mega popular for many types of television production. To be honest I can even see it being used in Television dramas and movies where the onus is just on getting everything done as quickly and easily as possible. Perhaps some of the soap operas that presently shoot on the Alexa will switch to the Amira. Arri seem to have embraced the whole ethos of "just get it done" and put it all in one camera and that is sure to be a compelling proposition for a lot of productions at the sharp end of budget restraints.

For more information on the Amira check out this page on the Arri website.

BREAKING NEWS: Just as I was finishing up this article, Arri released a video to youtube giving basic details about the camera. It is definitely worth watching: