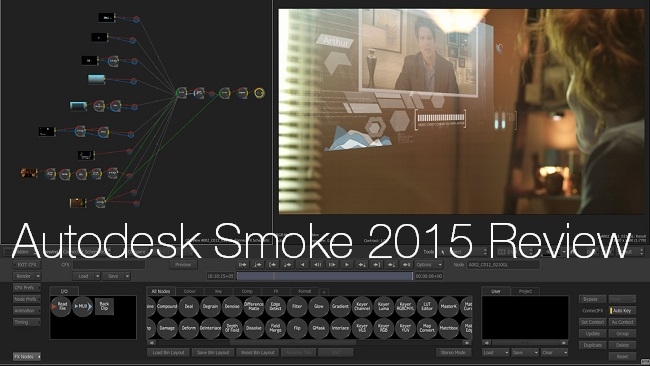 Autodesk Smoke 2015 is one of the few editing systems that can work at almost any resolution and has extensive 3D compositing capabilities, but what is it actually like to work with?

Before I go any further I should point out that I used to be a Smoke product specialist until 2004 but a lot of things have changed in ten years. Smoke is now a completely different animal.

Smoke used to be the little brother to Flame and Fire, and it ran on exotic SGI hardware like the other Discreet Logic products. After Autodesk bought Discreet, Smoke was re-written to run on Linux and off the shelf PC hardware, but it was still a turnkey system and could easily set you back $100,000.

Then in 2011 Smoke was released as a software only package for the Mac and in the last couple of years it has been enhanced and upgraded to take advantage of the latest Mac hardware like the new Mac Pro. Autodesk has also been steadily adding to the toolset, with many new features in the latest version.

So what can Smoke do? Well, of course it can edit, with native support for almost every format available including ARRIRAW, RED, SonyRAW, ProRes, OpenEXR, DNxHD, AVCHD, P2 and DPX among others. You can import material in a mixture of formats, resolutions and bit depths and mix them in your project and on your timeline.

Your projects can be created at resolutions up to 8K by 8K and at 8, 10, 12 or 16-bit colour depths, but within those projects you have complete flexibility to create timelines and media at different resolutions and bit depths and to output content at those settings. This makes Smoke ideally suitable for versioning, where you may have to create multiple versions of your edit at different sizes and colour depths.

Smoke can conform edits from EDLs, AAFs from Avid, and XML from Final Cut Pro. In fact the latest version supports many of the effects in a FCPX XML export so you can assemble the timeline in Smoke and many of the settings are already applied. 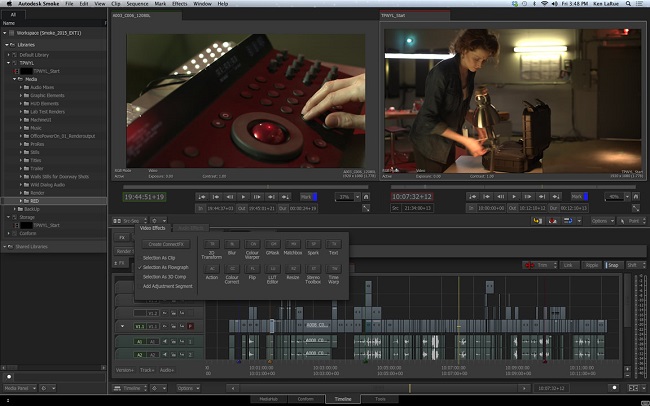 The user interface and the way you can work in the timeline is pretty much industry standard, with a lot of functionality identical to working in Final Cut, indeed you can even load the Final Cut Hotkeys if you wish. Timelines have multiple video and audio tracks and you can have multiple timelines active at the same time, so again it makes versioning very simple.

Where Smoke comes into its own though is with compositing and FX. There are standard FX built into the timeline for the usual things like 2D transforms, Timewarp, Colour Correction, Resize and Text, but there is also a button for "ConnectFX". 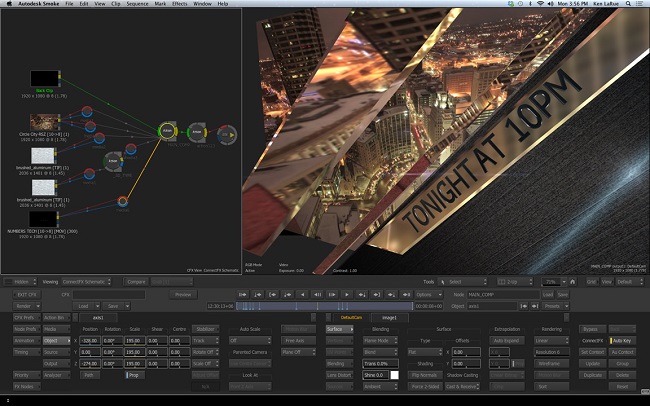 ConnectFX allows you to add node-based compositing to the clips in your timeline, with a palette of tools that have come from Flame, and a true 3D environment that allows you to combine video, graphics, 3D models and lighting effects in a completely freeform manner. These node-based effects are all processed at 16-bit Floating Point so there is no visible degradation of your material, no matter how complex you make the FX, and they can easily be saved and applied to other media.

One of the new features is a 3D tracking node which makes it possible to analyse shots and extract the camera motion so that you can then add elements seamlessly into the shot. Check out the video below:

So what's the catch? It must be expensive, right? Well, not really. Smoke 2015 is now available on a subscription plan so you can pay monthly, quarterly or yearly. This works out at $185 per month, $460 a quarter or $1,470 per year. You'll need a decent Mac to run it on, a retina display MacBook Pro or a Mac Pro, or even one of the new 5K iMacs would be good. You can use Blackmagic or AJA hardware for I/O and you can use your own disk arrays, the faster the better (and big if you're working at 8K)

Smoke is capable of many things, mixed resolutions, stereoscopic workflow, conforming, versioning and of course node-based compositing, and that is where the catch lies. Smoke 2015 is deep, very deep, in fact so deep that the 30 day free trial will barely give you time to scratch the surface. Learning to use it is a full-time job: every time you think you've mastered it, they release the next version.

But at least with a subscription based model, you don't need to pay for the upgrades :-)