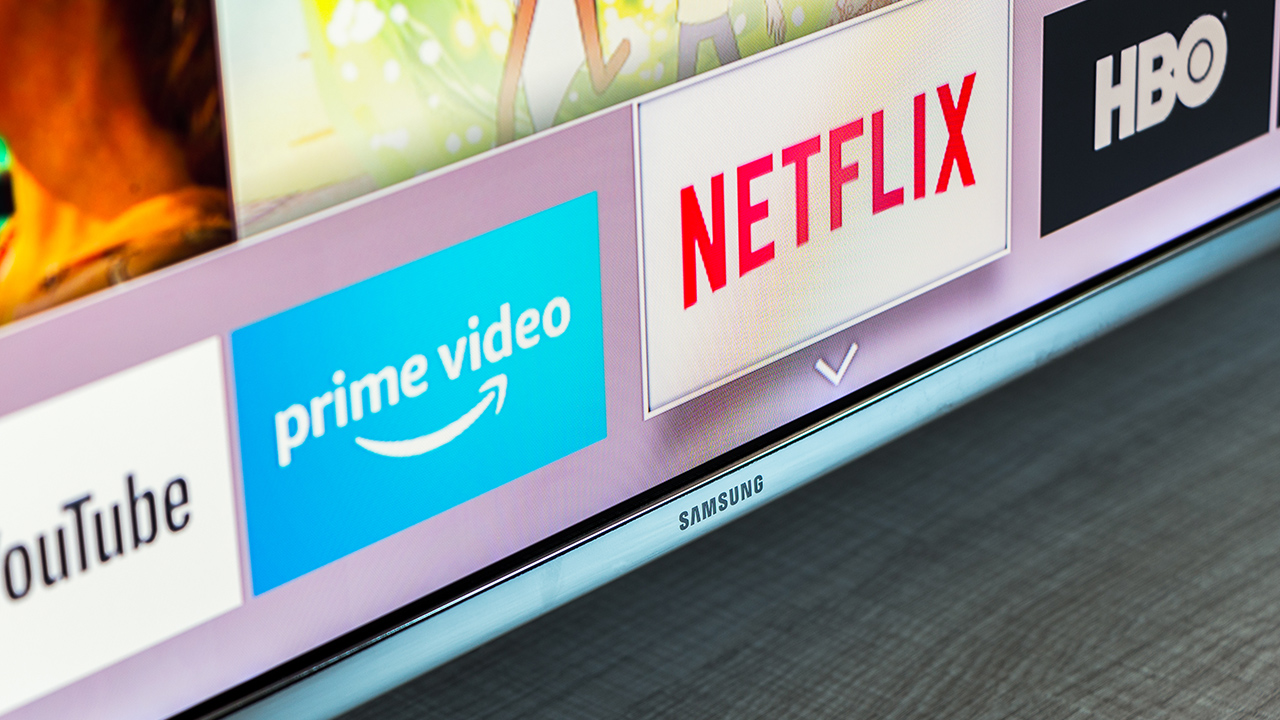 3 minute read
Netflix is outspending all its competitors. Image: Shutterstock.

The one to rule us all is currently Netflix and the extent of its attempt to remain in power is revealed when you understand that in ten years it is has spent $17.3 billion on programming.

To put that another way: Netflix is responsible for 45% of the overall content spending since 2010. According to JustWatch, an international streaming guide, Netflix spent two and half times more than next nearest competitor Amazon Prime Video this year.

Another report by BMO Capital Markets predicts Netflix is on track to spend $26 billion by 2028. By contrast, Disney spent about $1 billion on original programming for Disney+ in 2020. HBO Max reportedly invested $2bn and Apple TV+ had a $6bn content bill in its first year.

Viewing of premium OTT services would likely have surged this year on the back of launches from Disney, Warners/AT&T and NBCU/Comcast even without the pandemic giving us all a reason to stay home.

But Covid is a double-edged sword to the streamers which are reliant on new production to attract and retain subscribers. With production in suspended animation for most of the year, there are question marks about the ability of Netflix in particular to paper over the gaps in its schedule in 2021 and avoid people cancelling for something new. 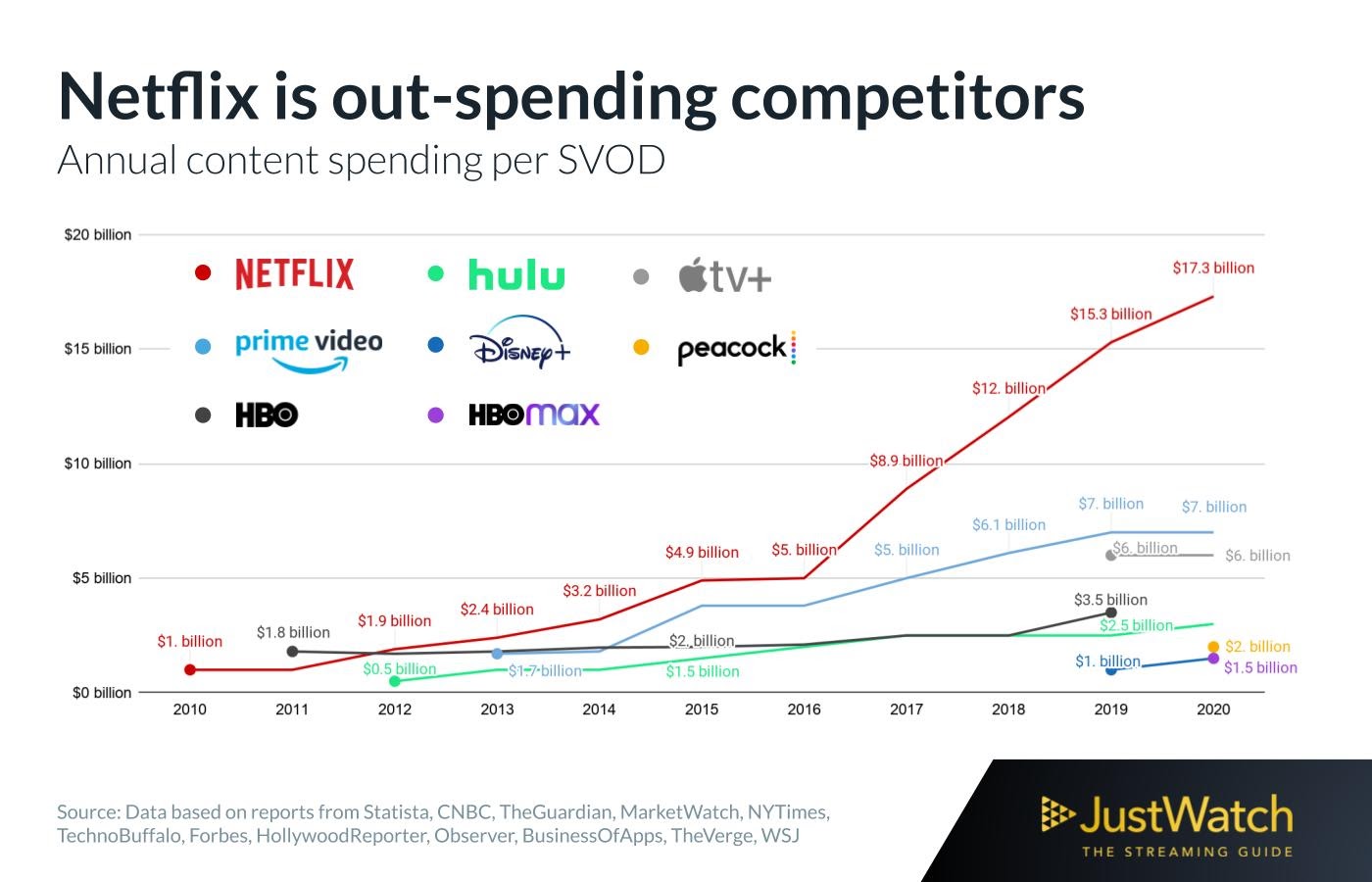 At close of year Netflix had added another 34 million paying customers globally to reach 195 million subs worldwide. Disney+ is its nearest competitor having rapidly amassed 86.8m paid subs by the end of 2020. Disney bosses expects Disney+ to reach 230m-260m subscribers by 2024 (excluding ESPN and Hulu).

These are the powerhouses. By contrast, HBO Max has attracted over 12.6 million people, apparently still on track to hit 75 million to 90 million subscribers worldwide by 2025 (it launches in Europe next summer). Apple doesn’t release AppleTV+ figures but is likely to have around 40 million active users. NBCU’s Peacock had bagged 26 million subscribers in six months since July.

But Netflix is different to Disney. The Mouse House unveiled a jaw-dropping number of films, animations and TV series culled from its franchises and brands the other day including Indiana Jones  5, a Buzz Lightyear movie and an Obi Wan Kenobi spin-off (and curiously zero mention of anything related to Avatar).

You can call it unimaginative and a cultural desert (which I do) but this stuff will sell on release and remain popular on Disney+ for years to come.

As The Verge puts it, “It’s a calculated, measured approach, that separates it from the scattershot tactics of Netflix’s hundreds of original shows and movies that flare up into the spotlight for a few days or weeks and are then forgotten.”

Since it no longer has the licence to stream content from companies like Disney, Netflix has to fill its catalogue with originals. Nonetheless, Netflix has said it expects the number of originals it debuts in the new year will actually be greater than those it released in 2020.

If it seems scattergun then it is hitting quite a few targets, perhaps as a result of its famous algorithm led approach to commissioning. It has already secured 24 Oscar nods for features like The Irishman, Marriage Story and The Two Popes and can be expected to land further nominations for movies like Mank, Da 5 Bloods, New of the World and The Trial of the Chicago 7 when the Academy votes in the spring.

According to Forbes, Netflix reckons it needs four years on average to begin to make a 90 per cent return on content. It made a net profit in 2019 of nearly $2 billion but its content costs remain astronomic.

“While it needs to rein in content spending in the long-run to boost cash flows, this could prove tricky, as subscriber growth could slow (or even decline) if it doesn’t keep updating its library at the same pace, given the competition in the streaming space.”

Discovery+, HBO Max and Peacock all have free advertiser supported versions but it’s thought unlikely Netflix will follow. It has earned its space as one of the select apps and buttons on Smart TVs and pay-TV systems like SkyQ and Virgin Media. Its user experience is second to none and its brand stands for premium content. Muddy those waters at your peril.