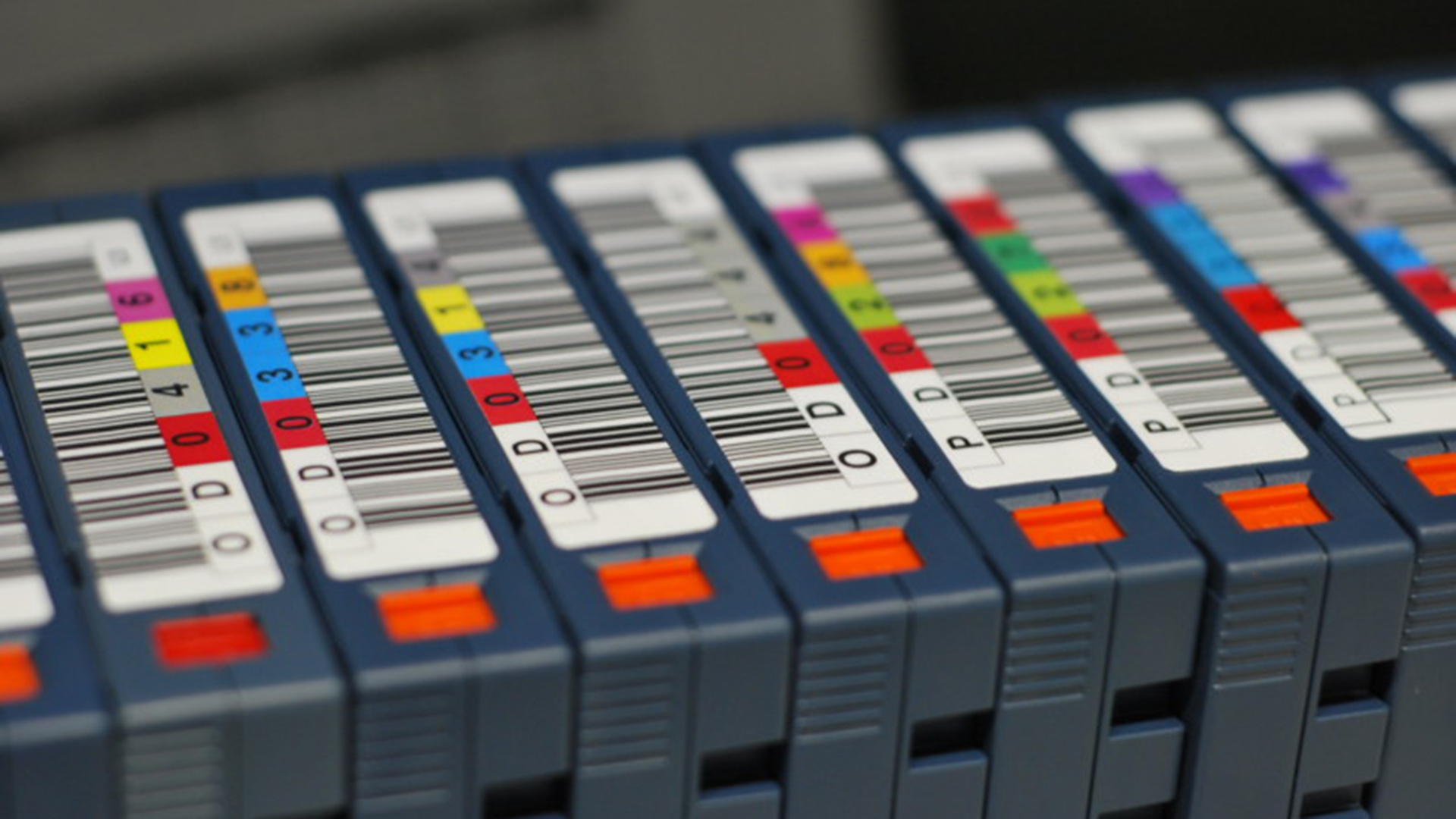 Fujifilm is currently working on stuffing 400TB worth of capacity onto a single magnetic tape drive. To put that into perspective, current LTO (Linear Tape-Open) tape capacity is a lowly 12TB.

It’s one of only two companies still making tape media (Sony is the other), and according to a report by Blocks & Files Fujifilm is actively building a tape cartridge 33 times larger in capacity than current LTO-8 stock.

It can achieve this dramatic leap by switching from the standard Barium Ferrite (BaFe) tape coatings to Strontium Ferrite (SrFe). While BaFe coatings have become smaller and smaller, allowing for greater storage capacities it has now reached the point where particles have become too small to be read reliably.

Media made using SrFe on the other hand has potentially far greater area density. Fujifilm itself says “the majority of the magnetic properties of SrFe are superior to those of BaFe, which will enable us to reach a higher level of performance whilst further reducing the size of the particles.”

None of this matters for day to day use or indeed for any company smaller than, say, the BBC. LTO is the leading solution for what are called ‘enterprise-level’ volumes of data and it’s also for deep archive. Like the Flash the sloth from Zootopia, accessing a clip from LTO storage just moves so in-cred-i-bly sl-ooo-www-ly compared to spinning disk, flash drives or something in the cloud. 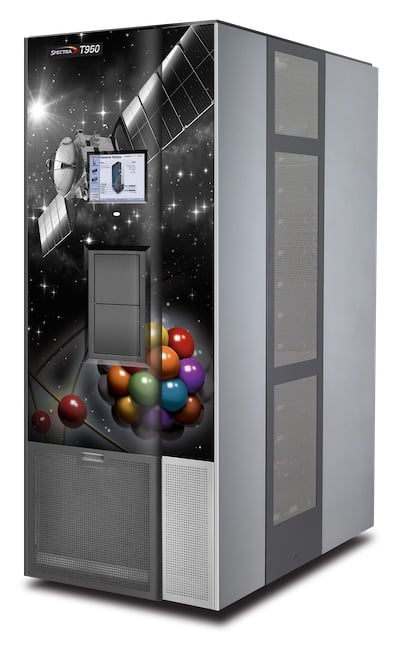 Tape is subject to degradation and bit drop out over time, and while LTO gets around this by recording data without the revolving head drum used on video tape, the system needs manual intervention every few years in order to migrate the data stored on it to the latest generation.

But it is cheap (a single LTO-8 cartridge being less than $100 though you’d clearly want more than one), it consumes no electricity and its capacity already exceeds most other common archive formats.

Plus, since its inception in 2000 and development as an open standard by  a consortium including Hewlett Packard, IBM and Quantum, LTO has followed roughly the same principle as Moore's Law. LTO tape storage capacities have roughly doubled every two-and-a-half years and, with LTO-9 due for release later in 2020, current capacity will indeed go up to 24TB and and 60TB compressed.

Blocks & Files expects the LTO consortium, by the end of 2021, to extend its roadmap beyond LTO-12, so a potential LTO-13 would have 384TB capacity.

Indeed, we may need a post-Strontium Ferrite technology to go any better than LTO-13.

So, let’s look at some of the options. 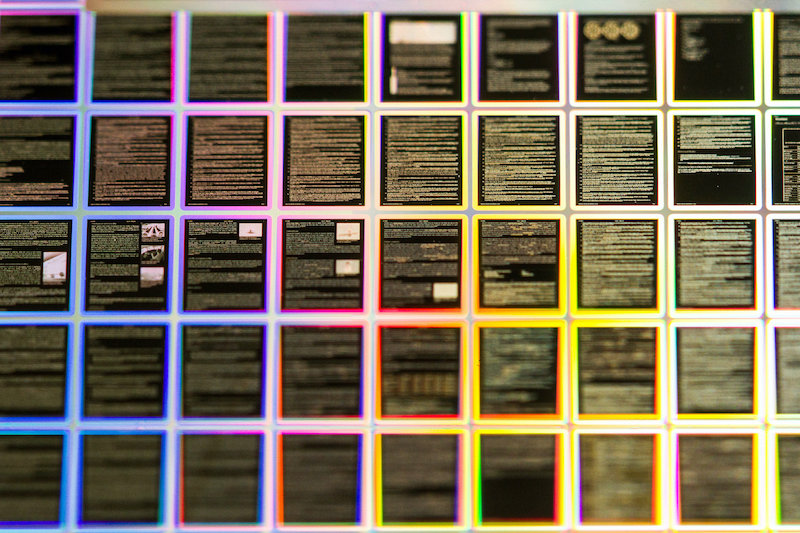 Nanofiche is one potential long term form of archiving.

Preserving data in the future

With the digital universe doubling every two years how are we going to preserve data for the next century and beyond?

Here are some options

Stone - The Rosetta Stone, carved around 196 BC, is the perfect database. It has lasted for centuries and its information can be read without any new technology. If only the quest to find an archive solution for digital media were as simple.

Celluloid - The only technology proven to last a century is film. What's more it has the valuable benefit of easy reading simply by shining a light through the negative. Notoriously fragile, if not flammable, film storage is expensive and requires vast temperature-controlled vaults.

Photosensitive film - Norwegian firm Piql devised a way to record digital files and related metadata onto photosensitive film. Its solution includes all equipment and processes needed for writing, storing and retrieving files and is claimed to last 500 years. It provides a self-documenting preservation master containing all information needed for decoding and understanding the preserved data.

Metal alloy tape - DOTS (Digital Optical Technology System) stores digital data onto metal alloy tape and is claimed to be archival for 100 years. Its specification – the 'Rosetta Leader' - calls for ‘microfiche-scale human readable’ text at the beginning of each tape. Because the information is visible, as long as cameras and imaging devices are available, the information will always be recoverable, the company says.

Nanofiche – Microfiche but on a nanoscale. Apparently impervious to temperature and humidity, it never decays. Each letter is the size of a bacillus bacterium. At 600 dpi, 150,000 photos can fit on a single 8.5”x11” sheet of Nanofiche, making it by far, the highest density analogue storage media in the world today. If there is one weakness of Nanofiche today, it is that it is a new medium, only supplied by a single vendor, NanoArchival, and not yet supported by an industry of suppliers.

Synthetic DNA - Using the chemical building blocks of DNA, molecules can be constructed that could encode Exabytes of data to be shared as a packet of inexpensive pellets. As well as being tiny and incredibly space efficient, DNA molecules are easily and cheaply replicated, even billions of times, and can then be later read using well-understood methodologies. Microsoft is one of the companies pioneering this.

Artificial Amber - The Arch Mission Foundation is researching the use of synthetic resins as artificial amber for the long-term preservation and recovery of DNA, cells and organisms. As part of this project it is also exploring how to encapsulate biological materials for long-term durability in space environment, and how to recover specimens from encapsulations for later use.

5D optical storage – AKA the ‘Superman memory crystal’ was developed at the University of Southampton a few years ago and encodes data at nanoscale as layers inside quartz silica glass, using a femtosecond laser. 5D memory has a theoretical capacity of hundreds of TB per disc and is durable for up to 14 billion years. Still in early R&D, some believe this tech may displace all forms of digital optical storage within 20 years.