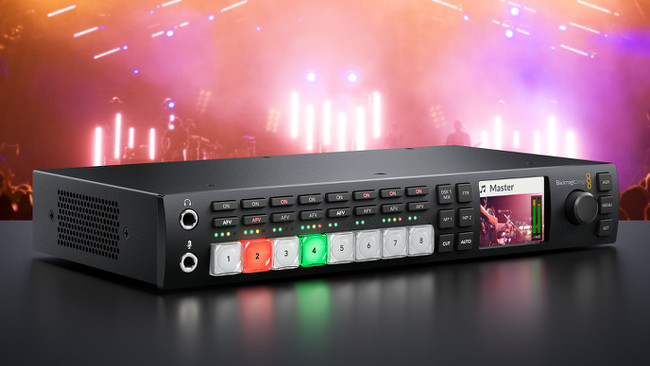 RedShark Review: Blackmagic’s recent unveiling of a trio of TV switching, recording and streaming products was exactly the sort of pulling the rug from under the rest of the industry announcement that the company specialises in. And happily their real world performance matches their impressive spec.

Blackmagic Design has acquired an unfortunate reputation for late delivery of products. The company's three most recent offerings, however, were shipping the day of announcement. 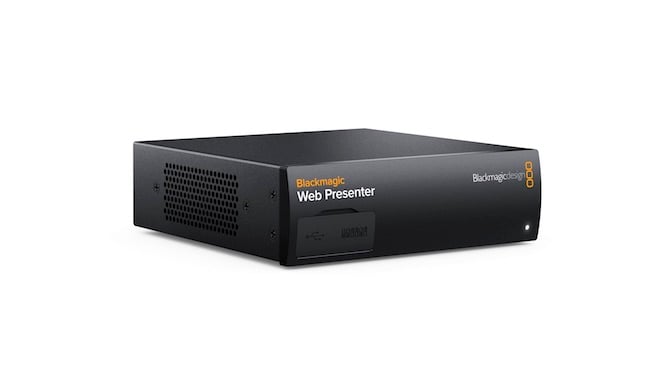 This $495 box appears to any computer as a 720p streaming webcam. It accepts any SDI or HDMI signal, converts it to 720p, using its built-in Teranex technology, and then sends it out via USB to a host computer where it appears as a webcam. In addition, it has SDI and HDMI loop-throughs to output the program at the original resolution. This is where, for example, the HyperDeck Studio Mini would come in handy, since it can record anything up to UHD resolution.

The Web Presenter works with any application that recognizes as webcam with such disparate options as Skype, Apple FaceTime, FaceBook Live, YouTube Live, Twitch.TV and Periscope, among others.

YouTube Live requires an encoding software package. My favorite of the streaming, encoding and production packages is Telestream's Wirecast, but Blackmagic products have compatibility issues with Wirecast at the moment. Telestream has promised a quick fix.

But for those who don't want to spend $495 for Wirecast or $995, Mac users have the option of Open Broadcaster, a fee open source package. Windows users can choose XSplit Broadcaster at about $90 for a personal license or $200 for an unlimited Premium license. Both of these packages recognize the Web Presenter and stream to YouTube Live.

I have been working on the Mac platform with Open Broadcaster.

My first experiment was streaming a video from the MacBook Pro via HDMI from the notebook to the Web Presenter and finally via USB to a MacPro running Open Broadcaster.

The first attempt resulted in a frantic email to Blackmagic tech support. There was no audio coming through the HDMI port. But before I even received an answer, I learned an arcane Mac fact, which I suggested to BMD that it include in the product FAQ.

Open Broadcast was simple to use. Simply add source and, in the preferences, select a streaming destination, in this case, YouTube Live. Next, sign into YouTube and open Creator Studio to create the live stream. You will need to copy the stream key from the YouTube live streaming configuration page to the appropriate field in OBS. Connect the USB and you will see a preview in OBS. Click Start Stream and that's all you have to do.

There are a few seconds of latency between starting the stream and the actual beginning of the stream but, very simply, it works.

If I had access to the Terranex Mini Smart Panel, I could have connected an SDI source and switched between inputs. However, I did not need the panel since I had a loaner of the ATEM Television Studio HD switcher. 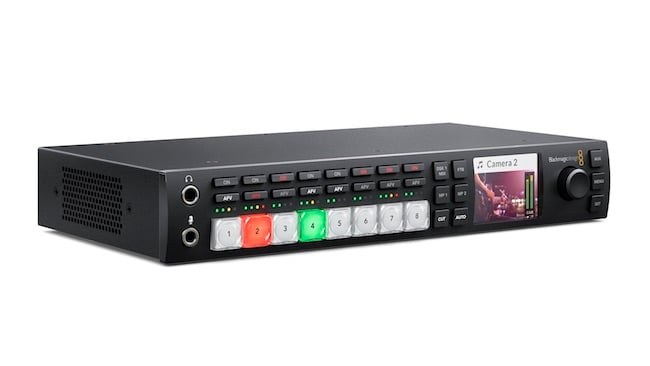 This $995 device is Blackmagic's latest entry in the ATEM switcher line. Unlike the earlier version, which was strictly a rack unit controlled only by host computer or optional ($5000) physical switcher, the Television Studio HD has actual buttons on the front for switching sources.

But there is a lot more to that unit than a simple switcher. It has 4 HDMI and 4 SDI inputs, keying, DVE, transitions, still store, external audio and a host of other features.

I'll address the ATEM Television Studio HD strictly from the streaming point of view and its integration with the Web Presenter.

While the full feature set of the box requires connecting to a host computer, it really is not necessary if simply using the device as a multi-input switcher and program source for the Web Presenter.

This is an important note. The ATEM switcher is not a Teranex and requires that all input sources be same resolution and frame rate. That can be set in the switcher's menu system and, thanks to the LCD display, there is no need for the computer. I chose the preferred input rate of 1080 59.94i.

For the initial test, I just used two devises: the HDMI output of the computer and SDI from a camera with its SDI output set to 1920x1080 59.94. I then routed program output via SDI to the Web Presenter, which was connected to the host computer via USB. Since I was continuing to stream to YouTube Live, I used OBS as the encoder.

Very simply put: everything worked the first time. The ATEM recognized the 1080 input from the computer and the 1080i input from the camera. The switcher offers both a Cut and a Transition mode between shots (transitions being set either in the ATEM menu or via the ATEM Control Software when switcher is configured via Ethernet to a computer).

Another great feature of this switcher is the ability to select audio sources. Front panel options are On and AFV (audio follows video). With an input toggled on, the audio from that device is live even when another program source is selected. AFV is pretty self explanatory.

The switcher has multiple outputs which are all live simultaneously. An HDMI live view output will show a split screen of all sources on any HD-compatible HDMI or SDI monitor. A looped output will take that output to another source and each individual SDI input has a corresponding SDI output for iso shots.

Operation with the Web Presenter is seamless. The Web Presenter accepts the 1080i input from the switcher, performs the down rez to 720p and outputs to the host streaming computer.

It is all amazingly simple.

The first look is indeed a very impressive one.