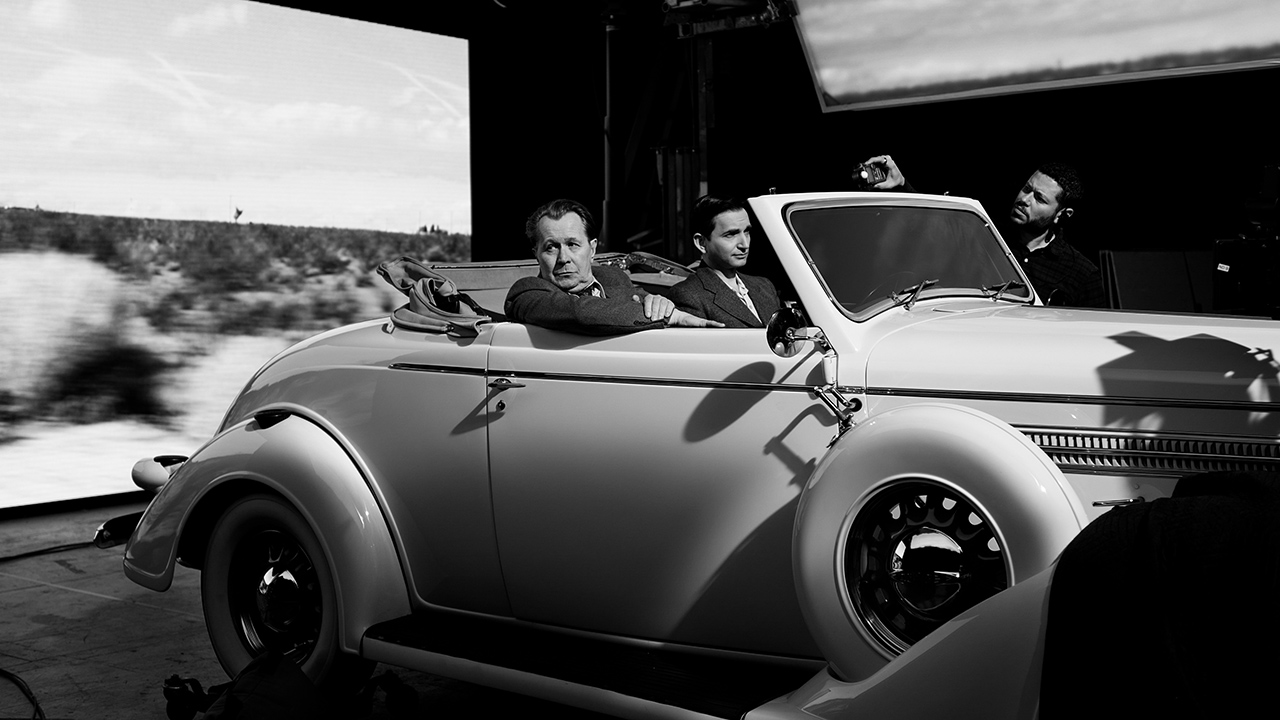 2 minute read
Behind the scenes on Mank.

London-headquartered facility Territory Studio, has recreated the iconic LA street of Wilshire Boulevard for David Fincher's 1930’s-set, Mank. The sequence using LED rear projection to evoke the traditional techniques used during the 1930s and 1940s which the movie pays homage to. Here’s how.

Territory’s team led by VFX Supervisor Simon Carr and CG Supervisor Ashley Pay spent a considerable amount of time in LA in pre-production, working with Fincher and DP Eric Messerschmidt ASC. They used archival footage, maps and old photography coupled with their own research and black and white photographic references captured while driving on Wilshire Blvd to inform lighting and texture in the CG scene. They began to rebuild the famous street as it would have appeared when Herman J. Mankiewicz and Sara Mankiewicz drove down it in 1934.

“We wanted to capture the imagery of a new city rising from the sand and dust, distinctly modern, yet with a sense of the Wild West,” Carr says.

Territory was tasked with conveying the sense of lawlessness and neglect in a city without road markings or highway code. Scouting both on the ground in LA and via Google Maps, they drew out the ground plan: identifying shops, gas stations and cinemas from the archive footage along which to drive a virtual camera car.

A guide cut was created for the street runs using a CG previz build. This allowed the team to focus their attention on the specific parts of the street that would be seen on screen, as opposed to losing time and effort creating a full model containing unseen elements. Much like the flats of studio lot films from the era, only sections of iconic buildings such as the ‘Fox Wilshire’, Cresswell Drug Store, the Coffee Drip and numerous Gas Stations were created. Their roofs and walls not needed if not in shot.

“We were given a camera-set up based on a tech recce, which enabled us to set up all the necessary angles,” Carr explains. “Most of the action would be covered in profile or ‘French over’ with the scene opening on a shot looking forward along Wilshire Boulevard.”

“By mapping the screen position we were able to check our renders back through Nuke cameras to ensure that they would line up. As we were rendering with a 3D camera, the parallax and the sightlines aligned with what the camera would see if it were actually travelling through the environment as a real location. Effectively, by concentrating our efforts on the areas that would play in the cut we built a digital backlot of Wilshire Boulevard. This is an approach reminiscent of classic filmmaking for which our aim was to avoid unnecessary build and get every penny on the screen.”

Mank is a movie for the cineaste. There are so many references to Hollywood myth which illustrate the attention to detail that went into making it.  The texture of walls, and trees lining the sidewalk or movie posters adorning the theatres walls are all period accurate.

Shooting with a B&W sensor

Messerschmidt shot the film using a RED digital monochrome sensor rather than desaturating colour footage during post. Territory chose to create the build of Wilshire Boulevard in colour for “rear projection” via LED screens, matching to the live action car and actors that would be seen on set. The camera’s sensor would then capture the whole scene in black and white during the shoot.

To facilitate this process and ensure an accurate result the Studio viewed their work internally with a B&W LUT which matched Fincher and Messerschmidt’s reference footage. This allowed them to preview what the final image might look like in advance, giving greater control over textures and contrast levels which were significantly affected by the monochrome look.

Mock on-location images created during look development were cross-referenced against archival images to ensure they were capturing the essence of the ’30s look. Using black and white stock to match what was used on the original ‘Citizen Kane’, and by using both 35mm SLR and medium format cameras they were further able to explore the characteristics of the stock and the effect of the California light.

Territory Studio is based in Clerkenwell and also has a studio in San Francisco. It has previously worked on Watchmen, Ex-Machina and Blade Runner 2049.