The (not entirely serious) guide to surviving IBC2016 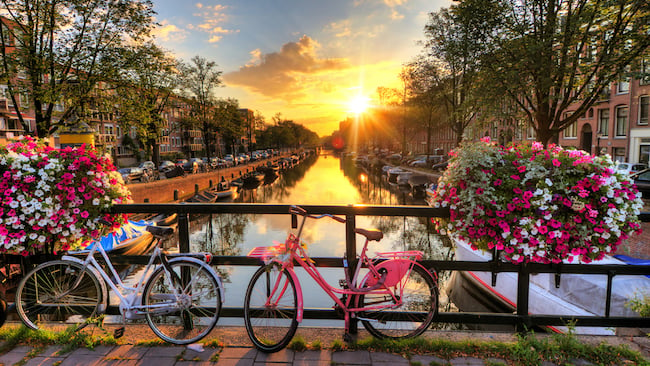 There's a beautiful city to explore outside the RAI

It’s a large show in the middle of a historic city that’s both famous for its culture and its fleshpots. Here’s the — slightly tongue in cheek — Red Shark Guide on how to make sure that IBC2016 doesn’t get the better of you.

IBC is big, very big. All 14 halls of the massive RAI Centre are filled to bursting with somewhere over 1600 exhibitors, and walking round the whole show takes a long time and eats up the shoe leather, especially as to get from point A to point B you usually need to go through points C, D and E along the way. In previous years attendees have even been seen using kid’s scooters to get around the place, but try and avoid such drastic levels of uncoolness by simply wearing something that’s going to be kind to your feet. And let’s begin the campaign for a travelator to get to the far reaches of Hall 7 now.

IBC themes its Halls via industry sector, so if you’re after audio stuff head to Hall 8, cameras and production equipment tend to be in Hall 11, and there are even halls dedicated to test and measurement. Hall 7 is where all the cool post production stuff is and is by a long way the loudest, most vibrant and most dynamic. Like supermarkets that hide all the wine in the furthest corner, however, it’s also the furthest from the entrance.

Sounds daft, but with somewhere in the region of 55,000 visitors from 160 countries at each show, it’s easy to run out. While there are more embarrassing things than frantically searching round for something to scribble your name down on (and in Amsterdam, plenty of opportunity to seek them out too) it never looks good.

4. Take advantage of the free stuff

The show mounts lots of free things and special areas within in to entice visitors, and some of them are pretty worthwhile. The IBC Big Screen Experience is completely free and has a really good spread of tech and imaging sessions this year, while the ‘What Caught My Eye’ series of Conference sessions are always free and always popular and provide you with a distilled insight to all that’s good on the showfloor. There are also free cinema screenings, the IBC Party, the IBC Awards ceremony and various other ways to entertain yourself without spending too much money. And head North out of the RAI, cross the road, and there are plenty of places to eat that are cheaper and a whole lot tastier than anything you’ll experience at the show itself.

4. The IBC Pub is the Bermuda Triangle

Believe us. People simply disappear there. They’re seen entering it sometime on Friday lunchtime and don’t emerge until Tuesday blinking in the sunlight, asking what time it is and whether JFK is still the president. Casualties of the IBC Beach – a canalside area covered with sand that likes to pretend it’s somewhere in the Caribbean and not actually adjacent to the North Sea – can be even more severe, especially if there’s been a sudden cold snap. Tell a friend where you’re going so they can raise the alarm if need be.

In a word, don’t. They go on for ever and you can’t get off. End of story.

Amsterdam is a city for cyclists. Which, unfortunately for pedestrians, means that they’re all out to get you. Step off an unwary kerb and it can be a competition which runs into you first: a bicycle (unfortunate), a car (bad) or a tram (worse).

Talking of trams, the Number 4 is the one that wends its way from the Central Station to the RAI picking up attendees as it goes and every year seems less a mode of transport and more a secret entry by the local authorities into some unannounced International Sardines Competition. If you’re staying up by the CS, try a metro train to Station RAI instead. Or (and this isn’t as mad as it sounds, especially if you’ve taken our advice about shoes) walk.

Still on the theme of transport, if you’ve made it to the airport with your limbs intact and nothing crushed, then the fun really begins. From Tuesday lunchtime onwards the place is rammed with tired and emotional delegates, and heaving queues, cancellations, delays and over-booked flights tend to be the order of the day. Leave early, leave late, go for the green option of taking the train (it takes a whole day from London, but lunch in Bruxelles more than makes up for it), just don’t expect to get anywhere from Schiphol in a hurry on Tuesday afternoon.

Unfortunately, introducing the world to the remarkably civilised habit of eating chips with mayonnaise is probably Holland’s greatest contribution to world cuisine. Unless you pay serious amounts of money in a top-end restaurant, traditional Dutch food can be rather on the dull side to be honest (apart from the meat canapés dipped in mustard that seem to pop up all over the place like meaty Ferrero Rocher). International cuisine though is generally of a high-standard and, as a legacy of its colonial past, Amsterdam is crammed with Indonesian restaurants that serve food whose rich deliciousness is only sometimes surpassed by its ability to blow the top of your head off.

Drinks-wise, Heineken dominates the beer market with something like 50% of all sales, but as befits a country which shares a border with Belgium there’s some remarkably good brews floating around if you hunt for them. Remarkably deceptive too, as many a thick head on the Number 4 tram can attest to. The Dutch are also partial to jenever, a juniper-flavoured firewater that’s closely related to gin. It’s often drunk as a chaser with beer in a combination called a kopstoot (headbutt)... which tells you all you need to know about it really.

It is amazingly easy to do all manner of mischief to yourself in Amsterdam, a city whose bipolar nature makes it both a cultural goldmine and a sinner’s paradise. And while some might seek out the city’s treasures and make a beeline for the Rijksmuseum, the Van Gough Museum and the like, to be honest the majority of the show’s attendees are more likely to head for The Walletjes, the Red Light District in the centre of the city. So, you may ask, what exactly is the etiquette for when you meet a company MD on the showfloor who you had last seen enjoying some of the, ah, more esoteric benefits of the city’s liberal culture in a dubious establishment at sometime past midnight? Smile and say nothing, would be our suggestion, because otherwise he might well ask what you were doing there yourself.