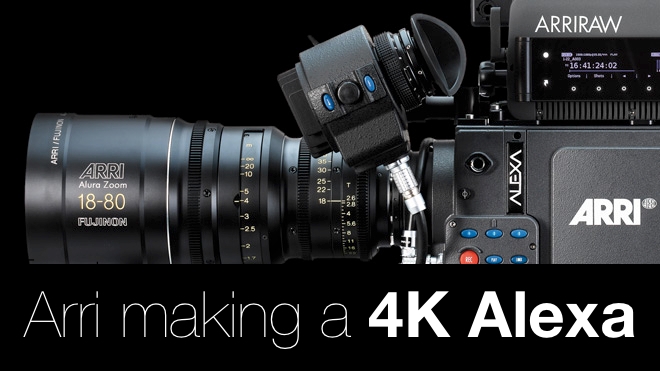 It looks like soon it will no longer be a matter of choosing between the visual qualities of the Arri Alexa or those of 4K resolution. A recent statement seems to suggest that it might soon be possible to have your cake and eat it

Franz Kraus, managing director of Arri, has announced that Arri are working on a new 4K camera. It will feature at least 4K resolution, at least 14-stops of dynamic range and high frame rate capability.  The idea being to create a new camera with greater spatial resolution without losing the visual qualities that have made the existing Alexa so popular.

There was some hint that the camera might have a larger than Super 35mm sensor too.

He also revealed that the Alexa was originally intended to include a 4K version to be released a year or so after the original Alexa. Sadly this never came to be because the technology of the time meant that the camera would have to sacrifice dynamic range in order to achieve the higher resolution.

His comments appeared to mirror those of Sony Digital Cinema VP David McIntosh who was quoted in a recent interview as saying: “Pixels matter, but it is not the whole story; picture quality has other elements, like contrast -- and color gamut is vitally important,”

There has long been an expectation that there would be a 4K Alexa at some point, but till now it has remained just an expectation. This is the first indication from Arri to confirm that there actually will be one.

Read the whole interview with Franz Kraus in the Hollywood Reporter here.

And here's a RedShark article about the making of the Life of Pi - one of the most widely acclaimed films of recent times for its visual qualities.