Microsoft and Sony are battling for your living room 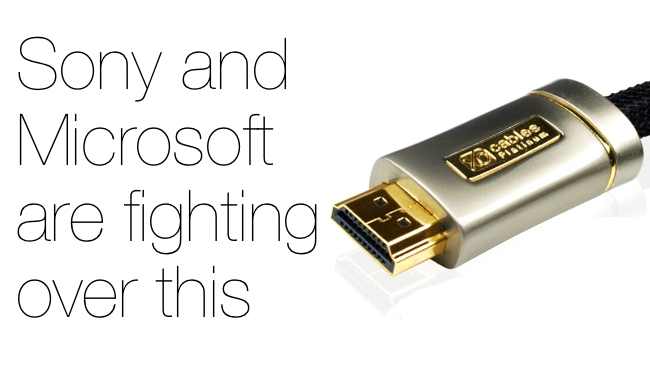 Microsoft and Sony are fighting over your HDMI

Now that the next-gen console battle lines have been drawn, guess what? Sony and Microsoft want the same domain: your TV and everything near it. David Valjalo investigates

"Team Xbox is on a new mission: design and build an all-in-one system to light up a new generation of games, TV and entertainment."
- Don Mattrick

Ever since Microsoft played catch-up in this generation of videogame hardware by revising its 360 to host an HDMI port, it's been a slow but steady skirmish between The House That Bill Gates Built and Sony to work their way up our TV's HDMI port pecking order towards that coveted number one spot. With PS3 Sony arguably won that skirmish, thanks in part to the strong uptake of Netflix on the platform but also no doubt thanks to the prevailing of Blu-Ray over HD DVD.

With Xbox One and PS4 now out in the open (save for the actual box of chips and wires of PS4, which some cunning video editors have managed to speculatively piece together from a recent teaser video), it's clear that the war for HDMI1 has only just begun. What's also clear is that one input slot is no longer enough: Microsoft and Sony - both multimedia corporations with fingers in many, many pies besides gaming - now see their game consoles (can we even call them that anymore?) as the centre pieces which can unite all their products under one roof. Your roof.
"The living-room has changed radically over the last eight years", said Microsoft's Don Mattrick opening the Xbox One reveal event. "To continue to lead, we must provide compelling answers to new questions. Can we take what you love and make it better. Can we improve a living-room that has become too complex, too fragmented and too slow by harmonising your experiences."

It's a noble, ambitious goal but it's also one that might obscure and further clutter the very eco-system Microsoft is attempting to stabilise. How much of Xbox One's functionality, for example, is actually going to require us all to be locked into Microsoft's walled-gardens of Windows Phones, tablets and Xbox Live. How many of us will be willing to give up, potentially, our allegiance to, say, Apple for our music services and smart phones? And will Sony be asking us for the same sacrifices?

Many critics of Xbox One's reveal have already come out guns blazing. There's the furore amongst the gaming press, rightly, over the confusion surrounding used games on Xbox One and the lack of backwards compatibility. Personally, I see a bigger problem. Due to both my work in the game industry and my status as a "fanatic" I invest, sooner or later, in all the major platforms. Previously that's meant a miniature ghetto of wires cluttering my living spaces and while that's unlikely to change this Christmas time, the presence of Kinect 2.0 and PlayStation Eye cameras in the mix as well, as they attempt - as has been confirmed in Kinect's case at least - to rule the way I interact with my TV and film viewing, has me even more concerned. Not only is Kinect attempting to fix what isn't broken in my life - how I navigate my general media consumption - it's also got it's beady electronic eye on being my primary (read: only) source for watching TV.

It's a grand ambition to potentially circumvent my traditional viewing habits and methods, and I'm not sure how it'll work in a territory like the UK in which I pay a TV license to support and engage in national broadcasting (is Microsoft expecting a wholesale uptake of iPlayer or will it be collaborating with the likes of the Beeb to conveniently stream me my programmed TV content?). And what about people without set-top boxes, using Sony smart TVs of the future: will the intriguing HDMI input slot of Xbox One be friendly enough to accommodate that scenario?

The question of Kinect

Besides the unique HDMI input, Kinect, of course, is the other major point of divergence between Xbox One and what we've seen of PS4 thus far. The biometric aspect to this new model holds fascinating, uncharted potential. It's application in gaming could take us to new frontiers of AI interaction and the rise of home-based exercise (I bet you know at least one person in your circle of friends who's mentioned or secretly participating in a P90 or Insanity living-room workout) makes Kinect seem like a worthy punt for Microsoft and the long-term evolution of the modern living-room. The gamification of our health is certainly coming, mark my words.

The real differentiators may still yet be to come, though. Sony may unveil something rather special with its PS4 hardware at E3 which none of us were expecting. Perhaps some onboard storage to blow Xbox One's 500GB out of the water, or some monstrous system memory and a processing power that'll divide the platforms like never before. Personally, I wouldn't count on this. As platform-exclusive games become fewer on the ground it's in both Sony and Microsoft's interests to try to keep a level playing field in terms of their hardware's capability and ease-of-development to make sure those all-important third-party blockbusters, the Call Of Dutys and sports titles that have already popped up at Microsoft's conference, can find a comfortable home on both systems.

There could, however, be some meatier 4K announcements and support to finally cement Sony's push into 4K TV and broadcasting (Xbox One was confirmed to have 4K input and output support at the company's post-mortem panel, if you missed it). As it stands the stakes may be higher and the consoles now more central to entire technological eco-systems, but there's much the same to observe in the pending face-off between Microsoft and Sony as there has been historically. First, there's the sense that Microsoft is pitching its native Western crowd (there's been little to no word on how other territories are going to engage with Xbox One's plans for TV-dominance, and I can only imagine the myriad contracts that will need to be signed in each region plus the focus on sports entertainment is very US-centric) where Sony's identity as a Japan-based company, one keen to welcome and host both the east and west game development scenes, was on full-display in its announcement event as it welcomed numerous videogame auteurs onto its stage.

More intriguingly, what else remains the same on this developing console landscape is that there's a third horse in this race that few are currently backing: Nintendo, the one company and platform not seemingly set on HDMI1 warfare, presumably because it's doing what it's always done: making revolutionary and industry-leading videogames. As with the Nintendo DS, Wii and 3DS - which each had turbulent first years at retail before rising to near-global domination and acclaim - don't rule them out yet.