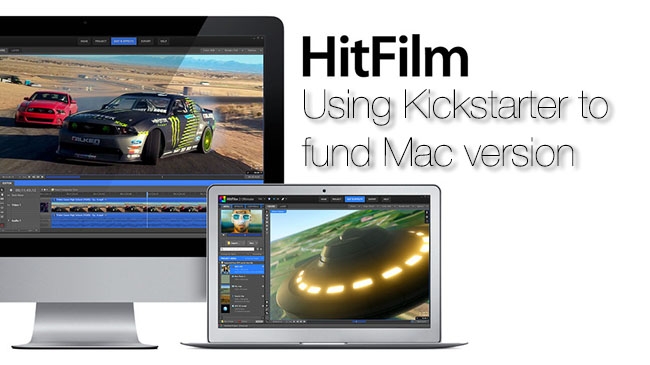 What do you do if you are a small software developer with a great product which is currently PC only and you keep getting requests for a Mac version? Well, if you are FXhome, creators of the Hitfilm VFX package, you put the project on Kickstarter

I first came across Hitfilm when it was released a couple of years ago. It allowed small post houses and even hobbyist video makers to create Hollywood style effects at a very low price point. Hitfilm 2 followed last year and was an impressive upgrade, giving users the tools to integrate green screen material, 3D models, particle systems and many other very cool effects, but still at a price that wouldn't break the bank. (in fact Hitfilm 2 costs less than some plugins) According to FXhome:

The HitFilm project has always been about disrupting the scene. We make software that is both powerful and affordable. Our aim is to bring professional concepts and techniques to all filmmakers, regardless of age, experience or budget.

Supporting young and indie filmmakers is a core part of why FXhome was founded over 10 years ago.

HitFilm is designed to blow away all expectations. The software has only existed for 2 years but already includes:

Take a look at some of what's possible here:

FXhome also added a social element to the software, allowing people to become part of a community of users. The software has been succesful but up until now there has only been a PC version. After  continually being asked if they could write a Mac version FXhome have decided to do it but are asking for funding on Kickstarter to raise £25,000. They have set various levels of backing, from just £1, including some levels that will get you the Mac and PC versions of Hitfilm at a heavily discounted price.

At the time of writing the project was nearly a third funded and still with 24 days to go. If you would like to see what's on offer to backers take a look at the Kickstarter page here.