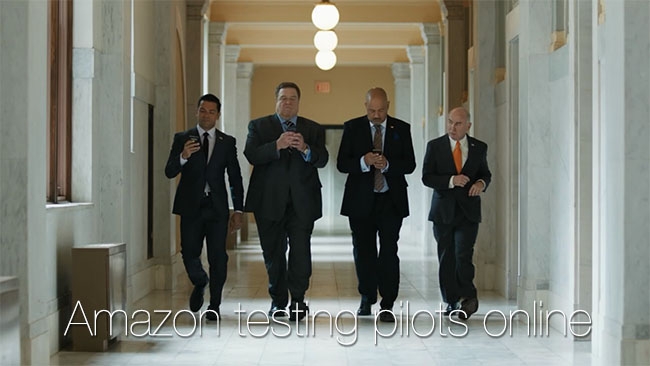 Alpha House - one of the new shows

The 14 shows are made by independent production companies and produced by Amazon Studios, the film and series production arm of Amazon.

Eight adult comedies and six children's animation series will be put to the public vote. The adult pilot shows include Alpha House, about four senators who live together in a rented house in Washington DC and stars John Goodman, who was recently in Oscar-winning film Argo.

Onion News Empire is set behind the scenes of the Onion News Network, a satirical daily news service, and "shows just how far journalists will go to stay at the top of their game" It stars Arrested Development's Jeffrey Tambor as the "egomaniacal lead anchor".

Musical comedy Browsers stars Cheers and Frasier actress Bebe Neuwirth as the "terrifying" boss of a news website in Manhattan.

Other pilot shows include Zombieland - based on the film of the same name - featuring four survivors attempting to outwit zombies, while animated comedy Dark Minions, written by Big Bang Theory's Kevin Sussman and John Ross Bowie, is about two "slackers" working on an intergalactic warship.

The children's shows include animations Sara Solves It, where Sara and Sam solve maths-based mysteries, and Creative Galaxy, an interactive art adventure series.

Anyone can watch the pilots and can vote and leave feedback. The full series will be shown on Amazons subscription services Amazon Prime and Lovefilm.

After the success of House of Cards on Netflix earlier this year and YouTube creating its original programming channels it seems this is another nail in the coffin of traditional broadcasting.