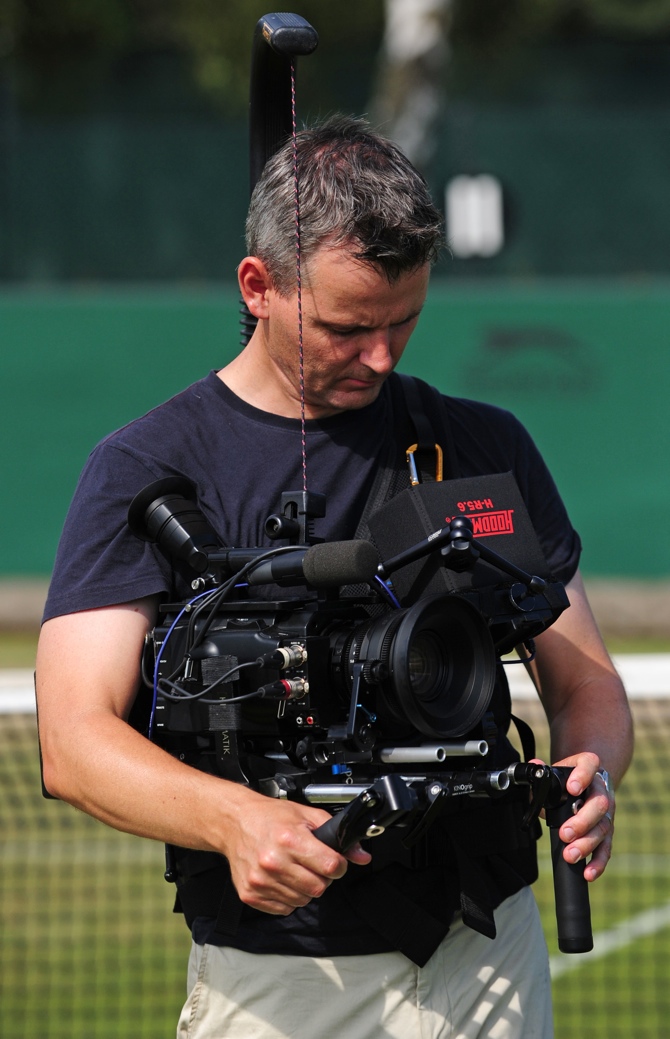 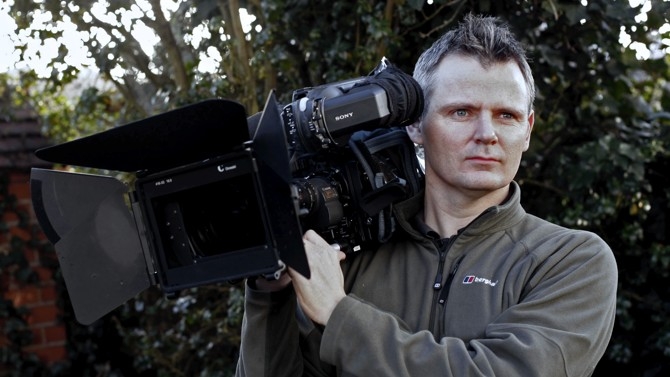 This is the first of our series looking at people who run a video production business focusing on their strategy and their technology. Mark McCarthy of Sparky Media Productions specialises in very high quality video which is increasingly obtainable on lower-cost equipment - although he's not afraid to use high-end kit where necessary.

I created Sparky Media Productions back in 2003 after working in the TV industry for a number of years, gaining valuable experience from a host of broadcasters including the BBC, Sky Sports, Chrysalis and IMG. It provided me with a wide range of skills from the outside broadcast to live studio production and putting together magazine shows.

Over the years we’ve (unintentionally!) developed a niche for ourselves in producing highlight films for the sponsors of major sporting events. We are currently producing highlight films for 7 major golf events in the UK, Abu Dhabi, Singapore and Shanghai. Sparky Media also specialises in producing customer testimonials for corporate clients and this is an area we believe there is great room for expansion; fter all there is no better sales tool for anyone than a solid testimonial.

Moving with the times

We have moved with the times in with equipment and technology and have always embraced the latest advances where possible, often spending money when it wasn't strictly necessary! We have never been asked by any of our clients to use a certain format or camera, but we have strived to offer them the best quality content within our means. Whilst certain networks are still moving over to HD production, we have been shooting material on HD for over four years and I can't actually remember the last feature we produced in SD. It was probably one of many four minute news packages we regularly used to shoot for CNN (they were still shot in HD and scaled down though!).

We started shooting on the excellent Canon XL1 in the early days, but now shoot on our main ENG camera, Sony's flagship PDW-700 (which is currently used for programs such as An Idiot Abroad, The Apprentice, X Factor, Dancing on Ice and a number of dramas). Our main "features" camera is the Sony PDW-F3.

Actually looking back over the years it appears we have been biased to using Sony equipment (having also bought the Sony DSR-500 and Sony XDCAM PWD-F350), but we have always their cameras to be ultra-reliable, that they produce great images and most importantly, they fit our workflow. We also had a Panasonic Af101 for a short time which we really enjoyed using on certain shoots, but decided to replace that for the Sony F3 last year.

The PDW-700 and Sony F3 have very different workflows which suit different filming requirements. Increasingly what we currently shoot has to be turned around in the field within a short time, and much of our content is now used online. Both the PDW-700 and F3 are great cameras for this. We always carry a PDW-U1 XDCAM disc drive with us so we can injest the XDCAM disks from the 700 quickly into the system (45 minutes of footage at 4:2:2 50Mb/s takes around 20 minutes). Rather than using the proxy files, we prefer editing with the full-resolution clips.

Of course it is important to have a system that can handle the file sizes and demands of editing HD content out on location. We currently use an 17'' Alienware latop, which is more like a desktop than a laptop due to its size, but it’s a really powerful piece of equipment, and apart from the old glitch with the graphics drivers, it has never let us down with rendering and editing clips. It runs as quickly as a full desktop system.

The Sony F3 has been a really interesting development for us. It has actually caused us a dilemma! It produces such fantastic clean, detailed images, we sometimes don't know what camera to take on various shoots - the F3 or the PDW-700, even though using the F3 needs a lot more workaround. The PDW-700 can sit comfortably on your shoulder, and with its amazing colour viewfinder and a 22x zoom lens, it feels like a piece of cake to capture great images. With the F3, you need an external monitor with a waveform monitor, rails and support bars, V-lock batteries, shoulder pad plus a selection of lenses. However we prefer the image from the F3 over the 700. 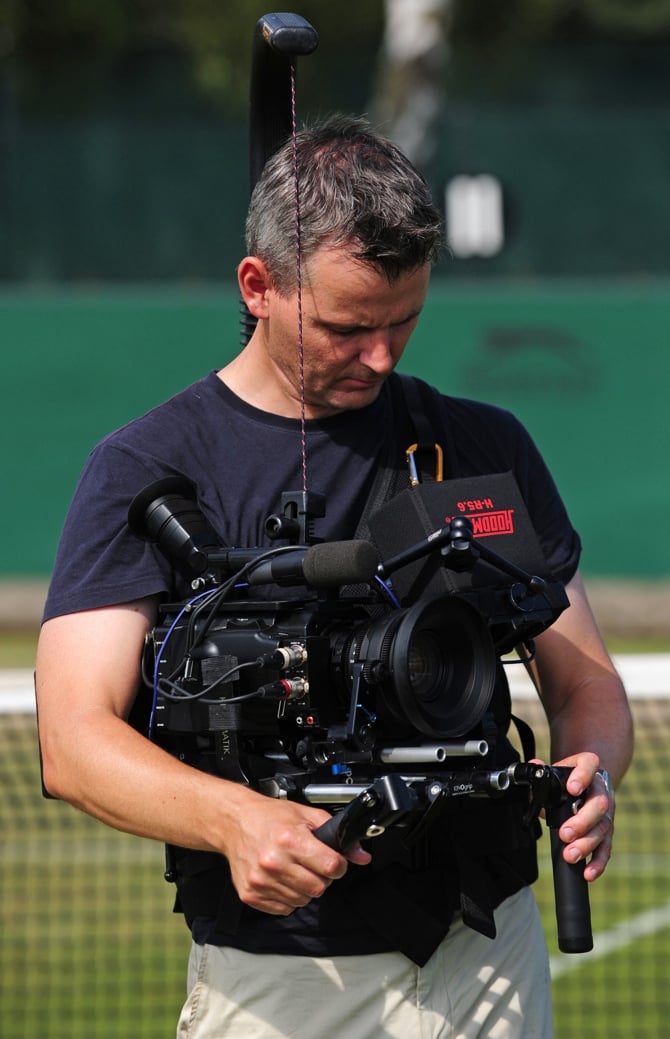 In addition we use the Atomos Samurai to record footage at a much higher bitrate than the internal cards can achieve on the F3 (4:2:2 as opposed to the camera's 4:2:0 colour sampling, and 150 Mb/s rather than the cameras 35 Mb/s). We recently brought the F3 out to Shanghai to cover an event and just getting it into the country was a challenge!  But for the extra effort (and it is much more work than using a standard ENG camera) the images the F3 produces are stunning. We also used it to cover the ATP tour finals at the 02 arena in London recently, and were again delighted by the results.

A real benefit from using an external recorder, and something we didn't quite appreciate originally, was that it's an awesome way of having a long term backup storage solution.  We use a 750 Gig Western Digital hard disc with the Samurai. It comes in at around £130 ($200) and can store around 12 hours of high quality footage recorded as Pro-Res files. As this media is so affordable, there is no need to re-use and reformat them - just use them up and pop them on the shelf!

The Samurai can also be connected directly to your computer where it is then recognised as an external hard drive. This allows you to edit the footage directly from the drive without transering it over to your system.  This for us is a massive benefit. You can be at an important shoot, perhaps shooting a piece to camera, and may want to check back your recording for focus, audio levels etc. All you have to do is plug the drive straight into your laptop and play the clip back there and then. It's reassuring.

We are upgrading our F3 with the latest S-LOG update and we'll let you know how we get on. We are really very excited about this as we know it'll take what is already an amazing camera into an even better one. There is a currently a clear demand from both the corporate and broadcast market for that "filmic", shallow depth-of-field look, and our updated F3 will be the perfect camera for this.

One word of caution though: if you are looking into using an F3 for an upcoming shoot for the first time, you do really need to invest a decent amount of time into using it beforehand. It takes practice to get used to straightforward things like judging exposure and getting a sharp focus. We are two months into owning it now and are only just getting to grips with it.

We have an upcoming shoot in Hong Kong and look forward to sharing some of our experiences and footage with you shortly.