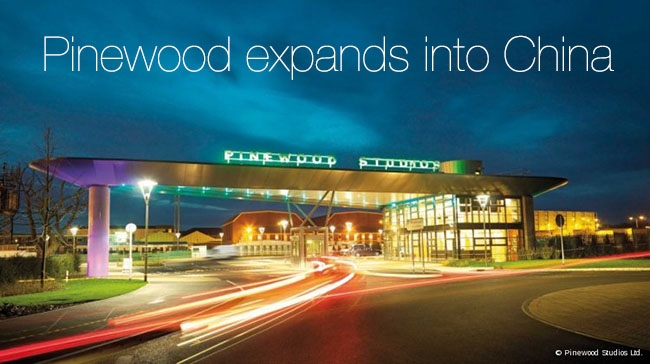 From the press release:

Pinewood Shepperton plc ("the Company" or "Pinewood"), a leading provider of services to the global film and television industry, today announces that the Group has entered into a 50:50 Joint Venture Agreement with Seven Stars Media Limited ("Seven Stars"), part of one of China's leading private media groups which provides content creation and distribution, media services and events.

The joint venture, to be called "Song Lin", initially will assess a number of business proposals in the growing entertainment market in China. Under the terms of the joint venture, Pinewood will provide its expertise with limited capital investment. The proposals include:

Seven Stars is one of the largest and fastest growing media conglomerates in China, with operating subsidiaries and joint ventures in Hong Kong, Europe, UK and the United States, and its founder and Chairman Bruno Wu has been a leading figure in the international entertainment industry for over a decade.

"It's great to see Pinewood Studios expanding its business with the announcement of its joint venture with Seven Stars Media. The creative industries are a rapidly growing area of China's economy and will increasingly provide huge opportunities for UK companies competing in the global race. Pinewood is leading the way, taking advantage of China's thriving entertainment and media sector and building on Britain and China's growing trade relationship."

"The Chinese market for content is the fastest growing in the world and taking Pinewood's experience and skills to that market in partnership with such an established and successful local partner is a truly exciting prospect. The joint venture brings together two companies with significant experience and will provide a conduit for film and television productions to maximise their impact in China. The partnership with Seven Stars, under Bruno Wu's direction, represents a strategic step forward for Pinewood's international development. If successful, the joint venture could provide significant opportunities for UK film and television producers."

"Together with Pinewood, we have identified a significant number of business opportunities for the short, medium and long term. The joint venture will aim to improve the standard of media production, create co-production opportunities for Chinese producers and export Chinese film and television content overseas. Our local knowledge and scale combined with Pinewood's unique operational skills and international reputation will enable our joint venture to participate in China's content explosion."

Pinewood already has studios in the UK, Germany, Canada, The Dominican Republic and Malaysia. This joint venture will provide opportinities for them to operate in the growing Chinese market.