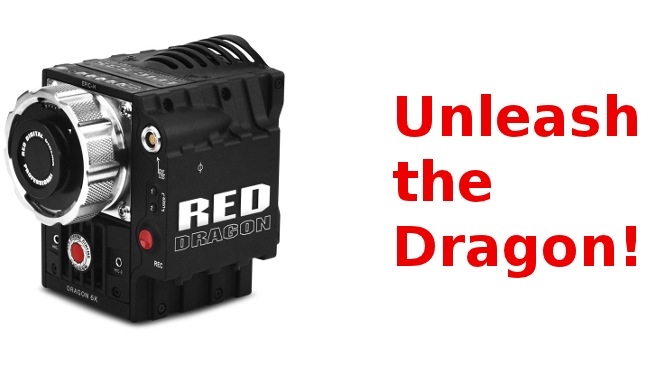 As expected Red have announced the release of the new Red Dragon sensor. The Specs are: Epic Dragon 6K. 6144 x 3160 resolution at up to 100fps. Three additional stops of dynamic range over Epic M-X

There’s been a slight fuss over that last bit, as of course Red was previously claiming 21 stops of dynamic range. There seems to be some indication that they feel like maybe they were a little overexcited when they said that. To quote RED’s Jarred Land:

We have kinda given up on stating dynamic range numbers because there are 20 different ways to measure it and they usually all give different results and every method has a somewhat subjective element to it.. so whatever you rated the MX sensor at.. add to that.

Add three to that number...

So what RED are now saying is that whatever you think the MX sensor was capable of, add 3 to that number. So if you were to suggest that the MX was capable of 12 stops, then dragon would be capable of 15 for example.

There’s some big news for Scarlet owners, as it appears that they too will get the chance to upgrade to the new Red Dragon Sensor, but not only that, but also the option of upgrading their camera to the Epic instead. I’m really hoping that this means RED are going to recycle the Epic boards removed from dragon upgraded Epics and use them to upgrade scarlets! Hopefully that would be a cost effective and environmentally friendly way of doing things!

Kind of a repeat of the trickle down economics we saw with the Battle Tested Red One cameras that were sold off after Red One users upgraded to Epic.

There will also be a new EPIC-M Dragon camera. Pre-orders are being taken at $29k. The actual cameras won’t ship until after existing Epic-M owners have had the opportunity to upgrade though.

Sadly there is no short film for the dragon camera yet as it appears that RED were working right down to the wire to have the camera ready for NAB! To quote Jarred Land again:

There will not be a NAB film shot on DRAGON this year. We had to make new ASICS for the Dragon remember and those literally just came in, and we are finishing off the firmware now. The Color Science and sensor calibration with a sensor with this much latitude is substantially more difficult to get perfect and we didn't have it complete in time to shoot something before the show.

I’m slightly disappointed as I was hoping for movie footage of lizards!

I get the impression that making a 6k camera was quite a struggle for RED. If you look at most of the technology at NAB, it is generally all 4k and pushing the boundaries there. 6k may not seem like a huge leap over the 5k that the Epic has been doing for a while, but I suspect this is a bigger leap than it seems from the numbers. There isn’t much else in this super high resolution space. There is the Sony F65 of course and the new 8k video camera head being shown at NAB, but really, that is it. My suspicion is this really is the outer limits of what is capable with the technology available right now and RED are planning to cram this technology into the same small space as the Epic camera currently occupies.

Prices for the different upgrade paths are as follows:

Red are also adding a special offer to buy the new Red Rocket-X card at the same time and to pay only $4495 for it. (The new card is apparently 5x faster than the previous Red Rocket)  Well there’s no time like the present and so RED are beginning the upgrade process for Epic-X and Epic-M cameras right away in their booth at NAB. They are inviting people to come and watch the process happening live! Having said that they do warn:   Don't bring your camera, we have already pre-selected and obtained all the cameras that we have time to upgrade during the show and these will be shipped to their owners the week after NAB.

Now what I’m wondering, is will it be possible to upgrade the Epic Monochrome to 6k?