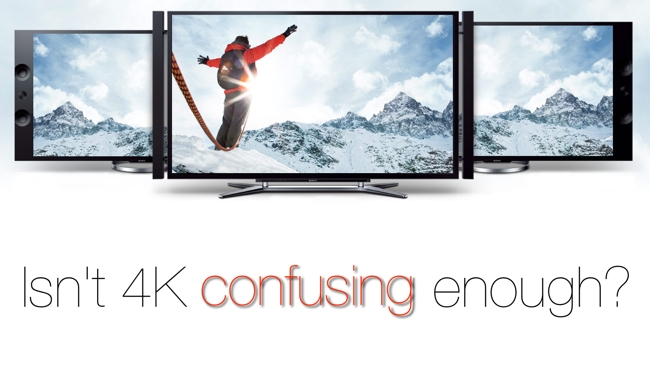 Sony's setting the pace for 4K, from the Lens to the Living Room, to use one of their favourite marketing phrases. And to show their commitment to the format, they've annouced that the're remastering some of their Blu Ray titles from 4K masters. It's good because it's a source of higher quality content for 4K display owners. But RedShark contributor Freya thinks it will also confuse customers. Here's her thoughts on the subject

There’s a lot of excitement about 4k at present mostly due to the decision of Sony to wade deep into 4k territory releasing 4k cinema cameras, workflows and most importantly perhaps the other end of the chain with 4k TV’s and a 4k video playback system for the home. It thus seems very strange to me, that having had so much success with getting everyone fired up and excited about the coming of 4k, that they have now decided to really muddy the waters by releasing “Mastered in 4K” Blu-ray discs.

These discs seem to initially be versions of the same titles that shipped with the 4k TV. The new display shipped with 10 feature film titles: The Amazing Spiderman, Total Recall (2012), The Karate Kid (2010), Salt, Battle: Los Angeles, The Other Guys, Bad Teacher, That’s My Boy, Taxi Driver and The Bridge on the River Kwai. Some 4k shorts were also included with the system. The first releases announced in the “Mastered in 4K” Blu-ray discs series so far are: The Amazing Spider-Man, Total Recall, The Karate Kid, Battle: Los Angeles and The Other Guys, so it would appear that Sony are re-purposing the 4k content they have already prepared for blu-ray.

They're not actually 4K!

The trouble is that these new “Mastered in 4K” Blu-ray discs, are not actually 4k. They are normal 1080p Blu-ray discs that have been created from 4k masters.  So the discs themselves are not actually 4k but the situation is even more confusing than that. Movies shot on film have in the past often been mastered in 2k and sometimes even scanned at 2k or less, as such perhaps scanning at 4k might create a better starting point digitally.

All of that aside, it seems to me that this move is really muddying the waters. We have all heard stories of people who think they are watching high definition television on a 1080p screen connected via a SCART socket, it seems that this is now only going to add to the confusion over what actually is 4k. The Sony press release itself says:

"When upscaled via the Sony 4K Ultra HD TVs, these discs serve as an ideal way for consumers to experience near-4K picture quality”

Which appears to suggest you can just attach a blu-ray player to your new 4k display and achieve almost the same quality of output!

And anyway, what exactly is 4K?

This is all on top of the question about what exactly 4K is, as the UHD spec is 3840 x 2160 (sometimes referred to as QuadHD), whereas actual 4k would be something more like 4096 × 2160. The marketing behind the whole “Mastered in 4K” Blu-ray discs however seems to take us to a whole new level of muddying the waters. Whether this will help or hinder the uptake of 4k TV remains to be seen but I wouldn't have thought that more confusion was really what was needed at this stage. Don't get me wrong: RedShark and I are great fans of 4K, but confusion is not what is called for at this delicate stage in the adoption of the new format.

“Mastered in 4K” Blu-ray releases will feature titles—such as The Amazing Spider-Man™, Total Recall, The Karate Kid, Battle: Los Angeles and The Other Guys—sourced from pristine 4K masters and presented at high-bitrate 1080p resolution, with expanded color showcasing more of the wide range of rich color contained in the original source. When upscaled via the Sony 4K Ultra HD TVs, these discs serve as an ideal way for consumers to experience near-4K picture quality. SPHE also plans to utilize available high quality 4K masters for select upcoming new release Blu-ray titles.  “Mastered in 4K” Blu-ray Discs can be played on all existing Blu-ray Disc players.

“The electronics industry’s groundbreaking launch of 4K Ultra HD TV has given us reason to even further elevate our Blu-ray offering,” said David Bishop, President, SPHE. “This spring, Sony Pictures Home Entertainment is excited to deliver a complementing lineup of ‘Mastered in 4K’ Blu-ray titles, offering consumers the best possible picture and sound quality to be experienced on the latest HDTVs.”

Leading the adoption of 4K content in cinema, home entertainment and broadcast, Sony Pictures builds on its renowned professional equipment expertise along with the company’s wealth of knowledge in both 4K acquisition and home entertainment. These “Mastered in 4K” Blu-ray titles—paired with the native 4K titles for Sony’s 4K video distribution service, which is planned to be launched in summer 2013 in the US—demonstrate Sony Pictures’ holistic commitment to 4K and to the launch of this exciting new hardware into the market.

SPHE will release this initial wave of more than 10 “Mastered in 4K” titles starting in Spring 2013, with rollout to select international territories soon thereafter.

Visit Sony Home Entertainment on the Web at www.SonyPictures.com.