Periscope: one of the new frontiers of broadcast 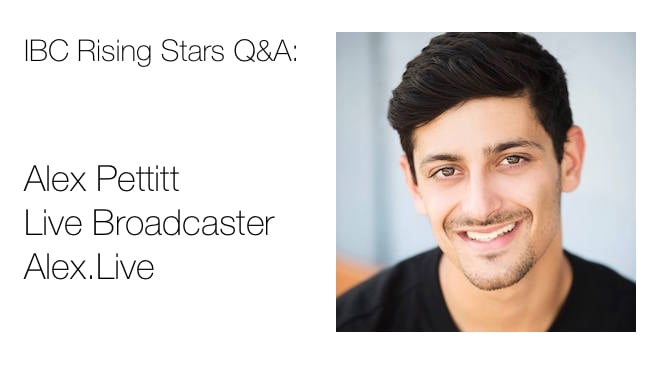 Up Periscope: Alex Pettitt is not only one of the panellists at IBC Rising Stars this weekend, he’s also the UK and Europe's No 1 Periscoper and has accumulated one of the largest global followings on the platform to date.

On Twitter's Periscope app, Pettitte has amassed over 250,000 followers and over 100 million Hearts/Likes. As one of the most connected people in the Periscope community and an expert on live interactive mobile streaming, Alex has been paid as a consultant by the BBC, NBC Universal and Sky.

RedShark: I understand you are in high demand – but what is it that do you actually do?

Alex Pettitt: I get asked this a lot :) There's a certain skillset often needed around mobile live streaming which has led to me being used as on-screen talent, especially around live events. It's a real skill to be able to host and present a live stream whilst at the same time feeding in comments that are coming in from those watching.

But I'm not just about on-screen presentation. I also push the boundaries of technology and content. By that I mean coming up with new, never seen before concepts and making them happen. For example, I created my own IP to do split screen interviews on Periscope and to feed in multiple cameras and integrate pre-recorded videos.

In addition, I do consultancy which can mean developing a Facebook Live or Periscope channel for a brand and then creating the right type of content for it, to finding the right type of talent that can easily pick up the skillset for engaging and retaining an audience. I'll also teach brands the right sorts of tips and tricks to do that.

One of the most important things I do is finding a way to integrate live, streaming and mobile with a brand's current social media strategy so that they complement each other.

Is there space for another Alex Pettit?

Absolutely! I'd actually say the room hasn't even started filling yet. It's such early days in this new medium and it's evolving so quickly that it's definitely possible for people and brands to jump on these platforms. With the right content and delivery they'll be able garner a large and loyal global audience.

Over the last 18 months I've gathered together over 300 'Tips and Tricks' to help those interested in interactive mobile live streaming, but by far the biggest advice I can give to people is to advise them that this isn't 'mobile tv'. Traditionally, linear TV is extremely one way, but this new medium is all about real time two way conversations. Developing platforms around interactivity is extremely important to succeed on apps like Periscope and Facebook Live.

Not everyone can be 'front of camera' talent so what's your best advice for social media live stream users who want to work with brands?

Front of camera really helps on live streaming because of its interactive nature. People love being able to see your face and to talk directly to you. However saying that, there are many live streamers out there who have made anonymity successful and who have never shown their face but connected with their audience through their voice. My advice for anyone wanting to work with brands is, find your niche and own it. Right now the door is wide open. Broadcast what you love, broadcast about it regularly, and you'll start to build a following around that topic. When your following gets big enough, you can then reach out to brands who operate in a similar niche as you and ask to feature their products or collaborate with them in some other way. Live streaming is a shiny new toy for 99% of brands right now. They know they want to experiment in this space, but they don't know how. If you go to them with a good enough proposal, 99% of them will say yes.

Can other social media live streamers users work with you? If so, how? And what might they get from doing so?

Interactive mobile live steaming isn't easy, there's a lot going on while you're live. You're trying to present and talk, but at the same time the audience are talking back to you in real time, new people are joining every second and you need to welcome them, people are sending it hearts and likes. It can all get a bit overwhelming, and that's why we've seen many successful YouTubers fall flat on their face when they try their hand at mobile live broadcasting. They're too used to the restart button, jump cuts, and filters. I coach people the skills they need to be able to process the many things that go on during a live broadcast and teach them the techniques to be able to handle all that information so that they can have have a raw, authentic and coherent broadcast and conversation with their audience.

Why do you think mobile live streaming is so popular?

Whether it’s a live stream of an over excited mum in a Chewbacca mask, or an on-the-ground look at the streets of Paris moments after its deadly terrorist attacks, there’s just something compelling about watching the world unfold live from your smartphone. Why? Because it’s happening NOW. It’s live, it’s raw, anything can happen, and as humans we hate the idea that if we leave we might miss something that everyone else will be talking about tomorrow.

Is it possible to plan a career when technology is changing so fast?

Technology is rapidly evolving, especially within this space. New features and platforms are launching every day. It's not impossible to carve a career in this space, you just have to be able to keep up with the pace that it develops and be flexible to change with it.

How confident are you that live video isn't tomorrow's Myspace?

We’re in the middle of a cord-cutting phase. Young people just aren’t interested in watching traditional TV anymore. At a time where the future generations are watching less traditional TV, but their internet and social media usage is increasing, I don’t think it’s too far fetched to see the likes of Twitter, Facebook, Periscope etc as major players within TV 2.0 / social TV in the near future. We’re already starting to see Facebook and Twitter battling it out to obtain broadcasting rights to major worldwide sports events. I can only see a rapidly growing future for the platform.