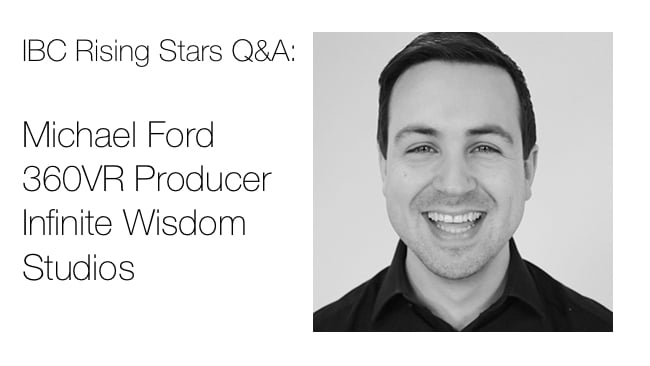 Infinite Wisdom Studios’ Michael Ford on the potential of VR, the differences between VR and 360-degree video, and what advice he has for people looking to get into the industry.

As you may know, RedShark is one of the key media partners of IBC Rising Stars, IBC’s innovative program for helping new entrants to the industry secure their first steps on the career ladder. As such, we’re conducting a series of interviews with some of the speakers at the event, hoping to understand a bit more about them, the part of the industry they're working in, and the advice they have for peopel who want to follow in their footsteps.

Michael Ford is the founder of Infinite Wisdom, a UK-based production company which scooped a Royal Television Society Award for ‘Best Fictional’ short film for Caterpillar, co-produced the drama-doc BASE and feature Pudsey the Dog: The Movie with Vertigo Films and is currently exploring virtual reality projects.

RS: People often use the word 'immersive' when it comes to the promotion of new technologies. What does this mean to you?

Michael Ford: Do you lose yourself in it? If the answer is yes, I consider it immersive.

What virtual reality projects have you most admired?

Notes on Blindness VR was based on the movie by Peter Middleton and James Spinney. We were on the Guiding Lights programme together and I thought it was a great, visually arresting piece. I always like to show people the Jurassic Park VR as I think it’s a fantastic awe-inspiring but comfortable entry experience. I also thought Catatonic was a spot-on horror which works both visually and psychologically in terms of journey and concept - 'you’re trapped in a wheelchair' - simple but effective. Plus, Remember on Jaunt. I watched that recently and it had a Black Mirror / 2001: A Space Odyssey vibe to it which I really thought worked.

People use the terms 360-degree video and Virtual Reality interchangeably. Is there any difference?

Yes, because if I say 'no', some VR nut will shoot me. True VR is a digital immersive world in which you can interact and has the potential to be open-ended. 360 video (whether monoscopic or stereoscopic) typically means a live-action fixed duration piece with the ability to look in all directions.

I understand the difference but like a lot of people, I believe 360 is the gateway to VR and will be for the majority of future adopters. 360 video creators have an obligation not to produce poor quality content that will put users off exploring the rabbit hole further, but I do believe it will capture the biggest audiences in order for them to discover those truly awe-inspiring VR experiences.

Do you see VR as genuinely mass market or niche?

I see it as more niche right now but it will be mass market. It’s out there. It’s gaining public consciousness. Right now it’s the equivalent of when mobile phones were carried in brief cases by the select few. And look how that turned out.

If you were looking for someone to join your team in creating VR stories what skills or attributes might stand out?

Theatre is a good background to have. Understanding of the stage, one room shows and the like - how to draw audience attention to things without cutting to close-ups. Some great movies have been essentially plays. Reservoir Dogs is predominantly confined to the warehouse stage. Imagine that story as an original VR narrative if it came out tomorrow.

Is it possible to have a five year career plan any more when technology is changing so fast?

If it is, let me know. I think it’s pretty hard for any independent producer to have a five-year career plan full-stop. But it’s good to set yourself goals and deadlines no doubt about it.

You are being mentored by producer Andrew Macdonald (ExMachina, Trainspotting) as part of Guiding Lights in partnership with the BFI. What are you learning?

Lots. I’m exploring the changing landscape of film distribution. Are there the same opportunities for new producers today as there were back in the 90s? And if there are, where are they? I’m also sharing my passion for VR with him so that’s fun.

What would you hope to pass on to any mentees in your care?

I’ve made a lot of mistakes they could learn from. But half the learning is falling down yourself and coming to the realisation 'why', I think. You can explain theory and give people tips but one thing I always remember is that everyone who ever did something new for the very first time followed a bunch of people who tried, failed and said it couldn’t be done.

Who am I to tell someone else something is impossible? More than anything I’d like to encourage the opposite. Listen, think carefully. If someone’s saying something can’t be done or isn’t right there’s a reason. What makes you think they’re wrong? Deep down if you believe you’re reasoning trumps theirs - sometimes you just have to go for it!

And finally, what is your advice to people looking to get into the industry?

Start making things. Filmmakers/storytellers have to make things. If you think you can do better, go do it. If you don’t have the resources you need/want then treat it as a work-in-progress, demo or sketch. But don’t always wait until you have every ingredient perfectly measured before you started cooking. People are hungry, feed them. Writing this has made me hungry.