Why you need to pay attention to the IBC Conference 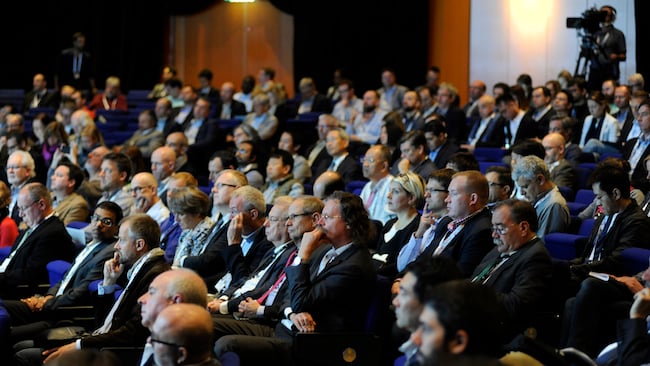 Many of the IBC conference sessions end up being seriously crowded

For many websites the IBC Exhibition, with its plethora of product launches and premieres, provides the main headlines. But to really understand what’s going on in the industry you have to pay attention to the IBC Conference as well.

Forgive the use of the personal pronoun, but one way or the other I’ve been involved with the IBC show for something close to two decades now, and for me the thing that elevates it above all the other tradeshows on the calendar is its Conference. Yes there are new product launches and plenty of them — with over 1600 exhibitors strewn about IBC’s 14 halls there are bound to be — but for me its been the debate and the discussion at the Conference that has really pointed out the future direction the industry is taking.

Here are a couple of soundbites from recent years that illustrate what I’m talking about.

In 2011, while the rest of us were still looking at early adopters’ iPads with a certain amount of envy, Anthony Rose, then CTO of then startup zeebox, said that the tablet is "going to arrive faster than anyone is expecting” and that “It will be a bit crazy for a while but it is going to be totally disruptive.”

He was bang on the money. Few things have changed the broadcast industry as much as the new generation of tablets and smartphones.

A year later, James Cameron made a now infamous speech characterising the future of the industry as a terminal battle between 3D and 4K. “We have a bandwidth bottleneck and if we start going to higher spatial resolution it will be at the sacrifice of 3D rollout,” he said. “So I see it as a little bit of an arms race right now.”

In which case, it was one he lost.

Both of these statements presaged what would happen in the following couple of years in the industry and that’s why it’s worth paying attention to what is being said by those running it as we speed towards the 8K, HDR, HFR, VR future.

That said, the Conference is not cheap to attend and most of IBC’s 55,000 visitors content themselves with following its news via the pages of the IBC Daily and other outlets (and, indeed, at RedShark we’re hoping to expand our coverage of the relevant bits of the Conference this year). But there are free sessions you can parachute into — 22 of them this year — and if you’ve got a generous boss and access to an expense account, there are others well worth a look at too.

The main freebie sessions are wrapped up into the IBC Big Screen Experience,and include what promises to be a fascinating look at lightfield camera technology and the Lytro Cinema Camera; a way of separating the look from the framerate of HFR productions; an interview with director Ang Lee whose latest, 'Billy Lynn's Long Halftime Walk’, has been filmed at 120fps, and a whole lot more.

Elsewhere there’s what promises to be a really interesting look at the latest developments with IP Studio and Distribution, while for those that have the budget to attend sessions there are ones that chase down subjects we’ve been writing about recently on RedShark, from ‘Has Technology Reinvented the Documentary Format?’ to VR masterclasses (quite a lot about VR in fact) and even a look at NASA’s history of space imaging and its plans to broadcast high resolution video from Mars.

You can have a look at the full programme here, whose most recent addition is a new keynote by Lord David Puttman promising a wide ranging look at the industry, from Facebook auto-running video to the implications of Brexit. And, don’t forget, if you’re planning on heading out to IBC this year, early bird discounts (including green entry to the Exhibition) end on 19th August. More on that here.