Opinion: Why Apple should jump into HDR video - and now! 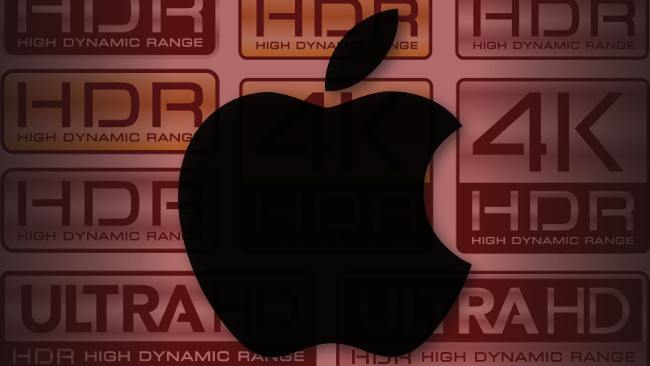 Clayton Moore argues that Apple should be implementing high dynamic range capability across its product lines (and, indeed, speculates that this may already be happening).

Dolby Labs has been working on HDR for over 7 years. When Dolby Vision was previewed at the HPA tech retreat in 2014, attendees agreed it was the most significant advance in visual technology since HD (and the presentation was not in 4K, but in HD). The speed with which the standard is being developed generally and rolled into consumer TVs right now has been very fast.

Right now, Apple is at an important place in its history. Steve Jobs, the heart and soul of Apple's vision, will have been gone for five years this October. Even before he was gone, the sales of computers generally speaking across both platforms, Windows & Mac, were already starting to slow as computing became more ubiquitous and mobile. Most people believed that Steve's influence over products will have mostly run its course five years out from his passing.

Apple got where it is now based on its ability to distinguish itself from the pack. Now, however, a technologically saturated market is making that harder and harder to do. iPhone sales (two thirds of total company sales) fell this last quarter, though not as much as predicted. Nevertheless, Apple announced the sale of its billionth iPhone. Pushing innovation into the market in numbers like that inevitably raises the game of the competition and without new and groundbreaking technologies to fuel your brand, you're in danger of blending in instead of standing out. Apple's massive worldwide growth has, in a way, made Apple a victim of its own success. Smartphones have matured to such an extent that Apple is now in need of a new product category to fuel its powerful brand going forward.

HDR is not, in and of itself, a product category, but it is technology Apple could use to buy some time and, in the process, have a positive side effect for the tiny niche that is the professional video market. Look at how fast the consumer market is going there already. You can buy an 55" HDR OLED TV for $2,700 or a 55" LED HDR for less then $600. Granted, right now HDR content is only on OTT streaming services, but HDR tech its rolling out very fast, no matter the scant amount of HDR content.

I'd guess that Apple would need to roll new iPhone and iPad cameras to go along with HDR display technology, but the company has all the hardware and software muscle it needs, backed up by huge amounts of cash. Of course, it won't be like a 12-bit, 15-stop cinema camera. But my guess is it already has something HDR-ish in an R&D lab somewhere. Full HDR support is almost certainly a part of the next version of Final Cut Pro. The current version of 27" 5k iMac has P3 color gamut. which represents about 25% more color fidelity then standard sRGB gamut. and the 5k display is already a 10-bit display. Apple is already going in that direction.

Readers of this site are part of a community of professional users. We are also 'consumers', of course, but as a category of user, we have other requirements and expectations of our technology then non-professionals. We tend to fall into a mix of two categories, people who are professionals and make our living at the craft and people who, for whatever reason, don't make our primary income from video, but are nevertheless professionally skilled users. I attended an professional HDR event in Burbank earlier this year and got to chat with engineers from Dolby Labs, Adobe, Sony and more. There was a large group of post production professionals in attendance, all boiling over with questions and observations, most of them Apple customers in one form or the other. The elephant in the room at that time was the exorbitant cost of monitoring, something that Apple could start to chip away at.

If you can get an HDR TV from Walmart and enjoy HDR content from Netflix today, how can Apple not jump on this sooner rather than later? I fully understand there is more than one HDR standard at this stage, but a version of HDR could help fuel a new sales cycle of smartphone and tablets by rolling brighter and bolder screens and Apple could offer an option of 27" iMac and Thunderbolt displays, even a MacBook Pro, with HDR. HDR is rooted in the science of the human visual system, a perfect fit for Apple. Apple will absolutely will go there, it's just a matter of when and how. The sheer beauty of HDR is not dependent on 4K resolution or screen size, as Atomos and SmallHD are already demonstrating.

Remember stories about Apple rolling out its own OTT Streaming Television Service? It was supposed to arrive already, then didn't. I believe it's still in the works and, other than contract issues, I'd bet Apple wants to roll in HDR steaming content. It just needs to make sure before it flips the switch that every single new product it makes uses screens (hundreds of millions of them) that can take advantage of that. Technical issues like heat and battery life will get worked out, and the company can even ship those anytime it wants silently, then just turn on the switch with a software update when the timing is perfect. It has the power to make Apple the single largest supplier of HDR video to consumers overnight and drive a new global HDR standard at the same time.

Personally I think Apple would be wise to make Dolby Labs a wholly owned subsidiary. Just thought I'd toss that out there to kick off the comment section. ;-)