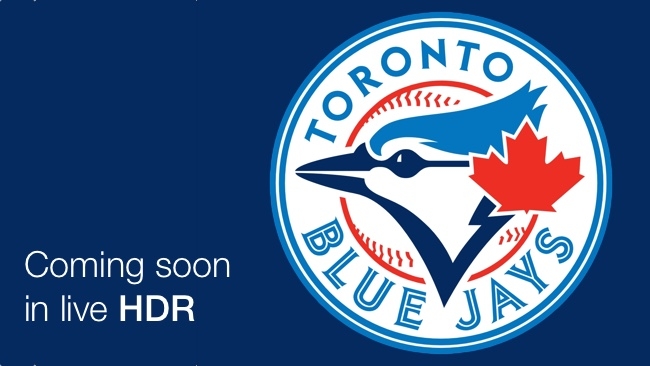 When the logo will pop with HDR

Two recent announcements — Rogers in Canada planning live baseball in HDR and Dolby inking a deal with MStar to put its Vision system on a chip — show that the momentum behind HDR is starting to accelerate.

HDR for some, HDR for all. Roger’s announcement of live HDR 4K Toronto Bluejays games from April 2016 was part and parcel of a wider announcement that it was rolling out gigabit internet with a new 4K set-top box to its entire cable footprint of just over 4 million homes across Ontario and Atlantic Canada.

Geographically, it’s a fairly small area but its significance lies in the live nature of its HDR offering. 81 Bluejays games are going to be presented in the format, which as far as we know, are going to be the first live HDR broadcasts to take place anywhere in the world.

The details of how exactly its going to do this are, as yet, unknown. But if we were going to bet on any live HDR technology to be broadcast-ready in time it would be be Technicolor’s Intelligent Tone Management software that scales SDR (Standard Dynamic Range — get used to seeing that acronym) source material into an HDR feed. Small scale tests have been undertaken all year and there was even a live demo taking place on the IBC showfloor.

Of course, it’s not the only HDR game in town. Despite fierce competition from competing systems, Dolby Vision looks to be still leading the charge on the consumer side of things. Its fortunes have got a boost with the news that its Dolby Vision 4K Ultra HD will now be available as a system-on-a-chip (SoC) thanks to a collaboration with MStar Semiconductor.

MStar specialises in providing chipsets for TV and set-top box manufacturers, and, after two years of optimisation work, can now include Dolby Vision in its range. There’s a price attached, of course (its notable that a lot of the company’s other efforts are currently concentrating on providing lower cost 4K chipsets) but it does mean that there’s now an easy, off-the-shelf solution for anyone wanting to manufacture a HDR-capable TV.