Roku 4 brings 4K streaming for $129 into your living room 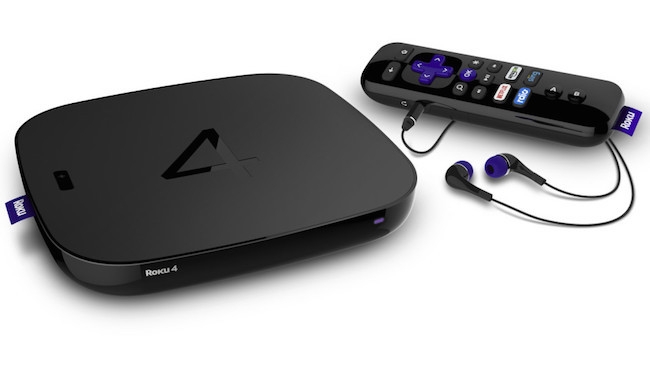 With the imminently released fourth gen Apple TV deciding to eschew 4K compatibility, erstwhile rival Roku is making a play for the resolution high ground with the new 4K-capable Roku 4.

Roku, long the market leader in its home territory of the US, has suffered rather flat sales of late and has allowed Cupertino’s Apple TV to grab larger and larger shares of the market as a result. But with the long-awaited Apple 4 just about to launch, albeit without the streaming TV service that many reckon could be Apple’s killer app in the TV marketplace, Roku is hitting back by making a play for the 4K high ground.

The quad core processor-based Roku 4 runs the latest version of the Roku OS, OS 7, and supports up to 60fps 4K streaming, as well as HDCP 2.2 and Optical Audio Out. 11ac MIMO WiFi ensures plenty of wireless bandwidth, while the user interface runs in 1080p…all of which is not a bad spec at all for a $129.99 list price.

Crucially, the manufacturer is also paying attention to 4K content as well, with a brace of initiatives. Am exclusive curated 4K Spotlight channel exclusive to Roku 4 offers movies and TV shows; a dedicated 4K UHD category within the Roku Channel Store will make finding streaming channels with 4K entertainment quick and easy; and it also been active striking deals behind the scenes, which leaves it in the position to offer what it claims is more access to more streaming channels for 4K entertainment than any other streaming player with selections from Netflix, M-Go, Amazon Instant Video, ToonGoogles, Vudu and YouTube.

Other good non-4K features include a well specced mobile companion app, universal search across a variety of OTT providers, and more.

Will it be enough to arrest Apple’s momentum in the market? It’s cheaper (Apple’s entry level TV is a $169 32GB model, with a 64GB one available for $199) and, of course, it can stream 4K, so on paper it’s a winner. But Apple has an enviable capacity to be able to warp industries and perceptions surrounding itself, plus, of course, Apple TV is going to be introducing gaming into the mix via its hyperactive app store.

4K versus games in the run up to the holiday season? Watching the sales figures is going to be fascinating.