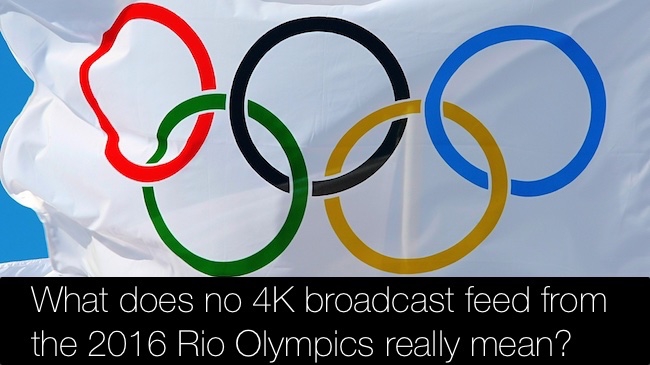 The statement by Olympic Broadcast Services’ Yiannis Exarchos that the organisation will not be providing a 4K feed from the Rio Olympics next year has taken a lot of people by surprise, and even caused some to question the whole shift towards 4K. Andy Stout explains why it’s really not that important.

There is a tendency within the broadcast industry to assume that everything revolves around two events: the Fifa World Cup on the one hand and the Summer Olympics on the other. Certainly this is the cycle the equipment manufacturers like to work to, gearing up to supply increasing numbers of cameras and the ‘glue’ products needed to build a transmission chain every two years or so.

However, for all the momentum behind 4K on display at tradeshows like BVE, CABSAT and next month’s NAB, Olympic Broadcast Services (OBS - the peripatetic host broadcaster of the games since 2008) is so far saying that it is completely uninterested in providing a 4K feed from Rio 2016.

“There is no demand from our rights holders for 4K,” commented Yiannis Exarchos, CEO of Olympic Broadcast Services during an interview with The Hollywood Reporter (for the complete story click here). “We have to take our cue from broadcasters.”

Here are four reasons why it’s really not that important.

First off it's a case of who the Olympic rights holders are. Most are big national broadcasters running free to air services, who are exactly the same broadcasters who will wait in the wings while seeing how the 4K services will shake out. Once 4K has been established by the pay-TV providers and OTT services that specialise in deploying cutting edge technology as a means of luring in viewers, then they will follow. It was a strategy that paid dividends during the introduction of stereo 3D, and if it ain't broke they aren’t about to start fixing it now.

Secondly, OBS isn't in the business of large scale technological development. It will stage tests and trials, sure, as it needs to demonstrate production expertise in new technologies to retain the confidence of the rights holders in any future developments. Over the years this has seen it investigate stereo 3D, 4K and 8K, and will likely see it launch into the brave new world of VR by the time Rio comes around (as long as that bubble hasn't burst by then). There will also be more 8K tests too.

Indeed, in the same Hollywood Reporter interview, Exarchos said. “In my opinion 8K is much more of a game-changer than 4K. You can really see a huge difference in experience whereas the gap between HD and 4K is far less.”

This is at best a debatable point of view. But The 2020 Olympics are being held in Tokyo and Japanese broadcaster NHK — a notable exception to the risk-adverse state broadcasters mentioned above — has gone on record as saying it wants to be capturing as much of it as possible in 8K, so it is very much politic point of view.

Thirdly, it would be a really difficult undertaking. While most of the components of the 4K broadcast ecosystem are in place, there are still weak points and while broadcasting the odd soccer match is one thing, scaling up to build an entire International Broadcast Centre — the hub from which such events are run — from the current industry position would be a challenging prospect to say the least. The rough rule of thumb is that the further away you get from the camera glass the more uncertain things are with the 4K production workflow, especially in a live setting.

And fourthly it has to be remembered that these things take time. Beijing 2008 might have been the HD Olympics as far as the supply side of the industry was concerned, but it wasn't really until London 2012 that the format took off in any way that could conceivably be termed mass market amongst consumers.

It is widely and conveniently forgotten that the introduction of HD was a 15 year project and, what's more, is still very much an ongoing one in many parts of the world. 4K has, to date, been a much quicker process but even though it is accelerated in comparison it will probably still have to go through many of the same stages that HD did: price differential on kit, a mismatch between the number of sets in the wild (high) and take up of 4K services (low), and then a gradual and osmotic switch over to the format that takes place almost by stealth.

There will be a transition between the formats, that is fairly certain, but it doesn’t necessarily have to be smooth and seamless. It will be lumpy, it will be jerky, it will overlap and it will go at different speeds at different times in different sections of the market.

That said, if 4K is not the core production format of the Tokyo 2020 games — or possibly even the 2018 World Cup — the industry will be very surprised. Whether we will be watching it in our homes in its native format or not though is a different question, with some people starting to places bets on a high frame rate, high dynamic range 1080p signal being upconverted to 4K by electronics in people's homes being the answer to the bandwidth problem that the format represents.

For Rio 2016 ,however, the blue-sky tests look to be all about VR and the real technological innovation will be in increasingly interactive formats (being able to chose viewing angles, cue up replays etc) delivered to mobile. Oh and, of course there will be 4K capture taking place. Panasonic is one of the game’s main sponsors, and even if OBS isn’t providing a 4K feed to the world’s broadcasters, Panasonic is a company with cameras and television sets to sell one way or another. Cinemas, public screens, dealerships…you might not get the 100m occurring in 4K in your living room but you will be able to see the major events in all their Ultra HD glory somewhere or other.