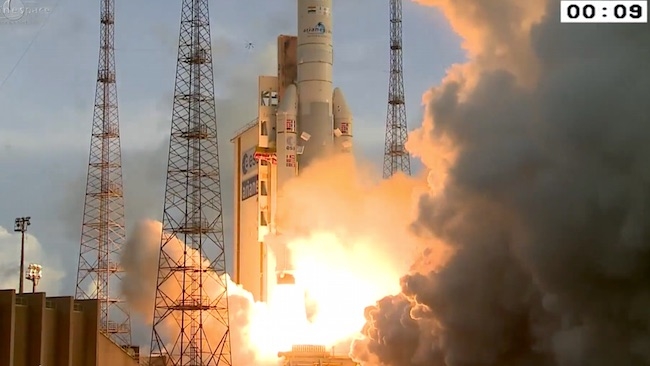 Lofted up into orbit from French Guyana via the ESA’s reliable Arianespace rocket, the new seven-tonne DirecTV-14 is safe and well in orbit and expected to begin operations in the early second quarter of 2015.

Alongside more prosaic work as a back-up vehicle for the satellite broadcaster’s existing fleet of six HD satellites, the new DirecTV 14 is also the cornerstone of the company’s forthcoming 4K operation and is apparently the first satellite to utilise the Reverse Band Direct Broadcast Satellite spectrum, all of which should give it plenty of heft to broadcast 4K across North America.

The company is planning to start transmitting live 4K programming at some unspecified point next year to back up its recently launched 4K VoD offering which debuted with 30 or so titles from the Paramount Pictures and K2 Communications stables (Star Trek (2009), Transformers: Age Of Extinction, Dinosaurs  Alive!, Amistad and Forest Gump etc).

“We congratulate the launch team and our partners, Arianespace and SSL, on a picture-perfect launch,” said Phil Goswitz, senior vice president, Space and Communications, for DirecTV, in a statement. “Today we achieved a significant milestone in the development and future adoption of 4K Ultra HD and ensured our customers will have an entertainment experience that is second to none for many years to come.”