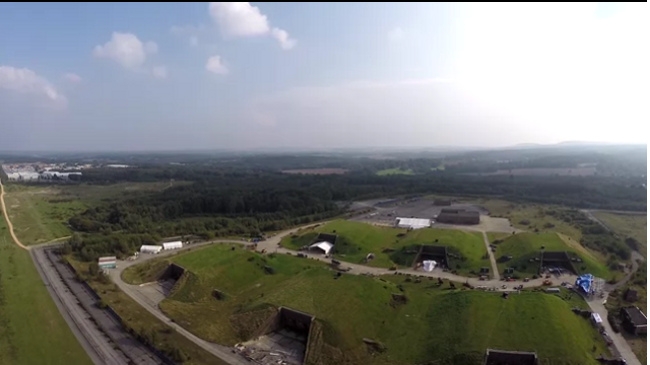 With International Star Wars day just gone, thought it would be fun to rewind back to September 2014, a time before The Force Awakens even had a title, and newspaper reports of a familiar looking set being uncovered by a drone operator flying over Greenham Common Airbase…

An Octocopter has stumbled across a set for the new Star Wars movie in a very unlikely location - and you aren't going to believe where it is! In fact, if it hadn't been confirmed by various sources, you might assume it was some kind of odd joke.

Greenham Common has a long tradition of being associated with some of Britain's most badly-kept secrets and was the site of long-running  peace camp protests, and that tradition seems to be continuing long after it ceased to be a military base hosting US nuclear weapons.

It now appears that Greenham Common is actually hosting the set for the sections of the new Star Wars movie after an octocopter flew near the site and captured footage of a number of spaceships, underlining what can be done with some basic radio controlled flight technology these days. Octocopters are becoming a growing technology in finding news stories like this. I expect we are only just seeing the beginning of Octocopters in this kind of context. Having said that, a flight school plane also snapped a photo of what appeared to be a half-built but familiar-looking spaceship in another incident, confirming what was seen by the Octocopter.

You can see the footage of the Octocopter approaching the former Greenham Common airbase here:

It looks like there is an 'X-Wing' Half a 'Millennium Falcon' and another spaceship outside a different hanger that I can't identify, probably because I'm not a Star Wars expert. (Edit: or maybe because it's under a Tarpaulin!) It was expected that the new movie would make use of models and I was expecting little ones, but it seems like J.J. Abrams is having everything built to scale!

It also seems that Greenham Common might actually be being used as a set in itself. Certainly, I was quite taken with the faked up shot of a storm trooper in this article from Newbury Today, which does have the appearance that he is standing in front of some kind of military base. Which, er, might be because he is!

More pictures have now emerged which show extra decoration being added to the airbase to make it more "sci-fi". And yet more Octocopter footage:

According to the comments in that last video, there is now a no-fly zone around the site. I'm not sure quite how they are implementing that but...

Some of our friends across the pond seem very taken with the scale of the huge realistic set that J.J. Abrams has created, not realising that those huge hangers are a real historic military airbase. Here in the UK, Greenham Common is possibly the most famous military base of all time due to the Greenham Common Women's Peace Camp.

I'm also impressed with the way it looks, but I’m hoping that the rest of the movie won't be shot in a disused quarry somewhere. Lets not take the whole British sci-fi thing too far.

It's rather strange to think that this famous location will now not only be strongly associated with the women's movement of the 80's, but also with Star Wars...