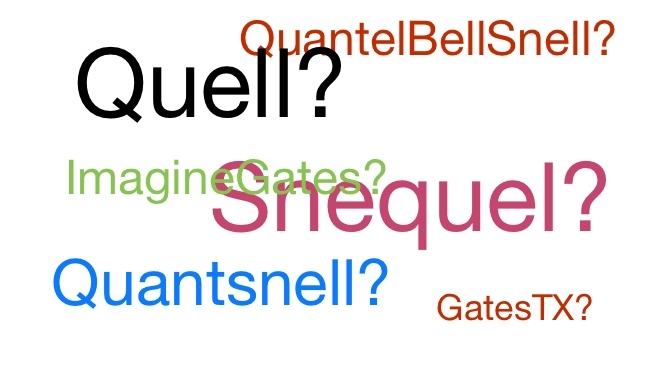 What's in a name?

The run up to any major tradeshow normally seems a spate of mergers and acquisitions announced, but first the news that Quantel was going to acquire Snell and then a major Harris restructure took a lot of people by surprise.

In many ways the Quantel and Snell deal shouldn't have been so surprising. For a start, both companies are owned by the same group of venture capitalists, Lloyds Development Capital, and both are also UK-based high technology companies operating in a broadcast world that has become increasingly commoditised and consolidated. Put them together and you suddenly have a company with combined revenues of more than $170m and 16 offices around the globe, all of which will look good on the LDC spreadsheets.

The fact that either company is still going is a testament to the quality of their R&D programs, not to mention the relative largesse of their current owners. The word synergies tends to be over-used at times like this, but it will certainly be interesting to see what the two company's R&D teams — which the various statements issued at times like this have been keen to emphasise work on product ranges that do not overlap — can come up with.

The fruits of that union won't be immediate though, Quantel itself estimating that it will be at least a year before anything emerges from the combined R&D efforts. Some of this though will involve 'massive' intellectual property that Snell has yet to exploit, and the company also hints at some interesting new technology in the live production space that will be unveiled in whisper suites at NAB.

The Internet of Frames

Certainly, both companies have been quite progressive in terms of their use of cloud technologies and the whole move towards IP. Quantel has a rather funky technology it dubs The Internet of Frames, which sees every frame of video, audio sample and all associated metadata addressable as web URLs, effectively allowing people to create a finished product from any of the parts stored anywhere in the world and then send it anywhere in the world too. And Snell has been hard at work developed some rather intriguing IP mixing technology to help realise the TV Everywhere concept: combine the two and you should see some interesting results in the IP space at some point in the not too distant future.

Meanwhile just over a year after being finally acquired by the LA-based Gores Group, Harris Broadcast has gone the other way and split itself into two. Imagine Communications, a brand only just acquired itself, will concentrate on the brave new world of IP broadcast, the cloud and so forth, while GatesAir, resurrecting a brand mothballed since the mid-1970s, will concentrate on the TV and radio transmitter business. Solid but a lot less sexy.

In contrast to the Quantel deal, which will see manufacturing ramped up again as both companies consolidate operations at its Newbury HQ, the two Harris companies will be headquartered in different cities, Dallas and Cincinnati, though still presided over by one single CEO, Charlie Vogt. Essentially it is a rebranding and repositioning exercise. Vogt talked of companies being “burdened over the years by costly, legacy infrastructure”, and given that it was Harris that often sold them that infrastructure in the first place, it’s time to move on into the service-oriented, software-based architectures of the future under a different name.

“We have created two laser-focused companies that are innovating across different ends of the technology spectrum,” said Vogt. Certainly, the first product is already out of the traps for the new structure: Imagine Communications’ new Media Central platform, an end-to-end, traffic, sales, automation program that will largely operate in the cloud. The company also rather more interestingly unveiled the concept of Software Defined Workflows, a technology that brings all media into the IP layer, separating the media content components from control and helping enable that TV Everywhere concept once more.

If all that sounds similar to what Quantel and Snell are working on, then that’s because it is. Some of the detail may be different, but this is essentially the story of two venture capitalists taking two different marketing strategies to providing the same group of solutions to an industry that is still trying to make sense of its future. There may be more of this sort of thing to come as the build up to NAB2014 progresses…