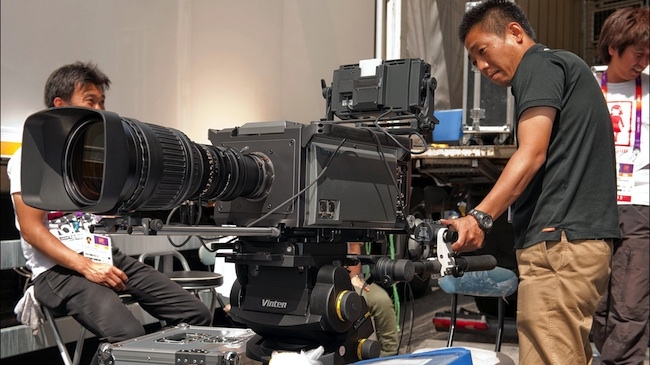 SHV camera being prepped at London 2012 - expect them to get smaller!

The decision by the International Olympic Committee to give the 2020 Olympics to Tokyo means that NHK's decades long project to bring its 8K Super Hi-Vision project to the masses not only has a deadline but that 4K now has the threat of built-in obsolescence to cope with.

When NHK and its various technology partners, including the BBC, first started showing its 8K and 22.2 audio Super Hi-Vision format at IBC a handful of years ago, it almost fulfilled Arthur C Clarke's famous dictum that any sufficiently advanced technology is indistinguishable from magic. It looked awesome and it looked impossible, with even NHK chiefs saying that transmissions would not begin until 2020.

Suddenly though, with the 2020 Olympics now awarded to Tokyo, a) that date doesn't seem so far away, b) an 8K Olympics is pretty much assured and c) technology has rather overtaken those initial estimates anyway. NHK is now talking about transmissions, albeit possibly in a limited sense and maybe to cinemas, by 2016. And let's not forget that the test transmissions from London 2012 last summer were deemed a success, even though they were only seen on a handful of screens.

This IBC will see NHK demonstrate realtime 8K encoding, courtesy of HEVC, and there will also be a single-chip camcorder on display, all of which continues its impressively speedy development of the format.

So, does this mean that 4K's days are already numbered before they have even probably started then? Not necessarily. As we've reported in the past, while its value as a production format is pretty much a given nowadays, there is already a certain amount of skepticism about the value of 4K in the home. And that skepticism ramps up significantly when it comes to 8K, with detractors saying that you simply don't need that many pixels for displaying moving images and that they're even a positive disadvantage when it comes to sport. Think IMAX and think motion sickness.

None of which will dissuade NHK, of course, and you can expect to see the pace of development in Super Hi-Vision ramp up significantly over the next few years. Whether the end user will be convinced by the worthiness of yet another technological leap upwards from 4K so soon though might well be another question entirely.