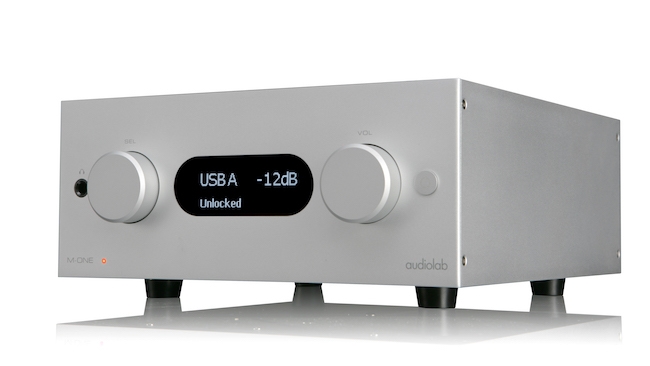 The M-ONE follows quite a simple recipe and takes Audiolab’s DAC technology, adds high-performance pre/power amp circuitry and stirs in a range of connectivity options including aptX Bluetooth to deliver what the company likes to refer to as "a delicious sonic banquet."

At first glance it's identical to the company's M-DAC+, but while both sport compact aluminium cases and feature a central OLED display and dual rotary controls, the M-ONE is pretty much what it suggests: an all-in-one that doesn't require a separate power amp.

Its DAC chops are based around the recently introduced two-channel ES9018K2M, kin to the eight-channel ES9018 chip found in the M-DAC+, which processes PCM audio data up to 32-bit/384kHz via USB, ensuring a certain futureproof-ability to deliver high res digital sound. The USB input also supports Super Audio CD DSD files, offering compatibility with DSD64, DSD128 and DSD256, while there are three settings for PCM files, four for DSD.

By the looks of it the compact form factor will have been a challenge best described as non-trivial for the electronics design team, as levering an amp into the diminutive space without compromising the DAC circuitry will have been a headache to say the least. They seem to have risen to the challenge though: the preamp section has a short, direct signal path while volume is digitally controlled in the analogue domain, outputting directly to the Class AB power amplifier, which delivers an output of 40W per channel into 8 ohms. The unit also shares the same headphone amp as featured in the M-DAC and M-DAC+, while multiple power supply sections keep crossover interference to a minimum.

In other words, it’s as elegant inside as it is from the outside. It’s functional too and boasts a decent array of inputs, as well as Bluetooth connectivity, ensuring that it should be able to cope with most forms of audio thrown at it. Availability is currently slated as August in either black or silver. RRP is £799.95