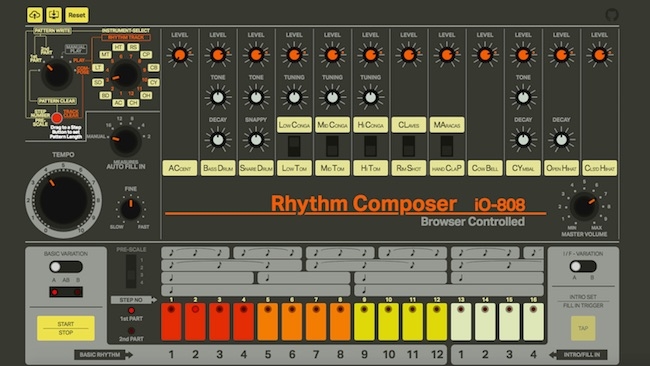 The web-version of the iconic - and slightly unfathomable - interface

There have been several web-based drum machine and synth recreations, but for our money the TR-808 at io808.com, which appropriately enough debuted on the 8th August, is one of the best recreations yet.

Roland’s iconic TR-808, released 36 years ago now in 1980, was probably the first drum machine to enjoy widespread popularity and became the backbeat of more electronica, hip hop and general dance music than you care to shake a very large (drum) stick at.

It was also the first one that was really any good. Its enduring popularity with dance music — and it really gained recognition with acid house more than a decade after release — is probably down to its surprisingly deep bass drum which is married to a selection of annoyingly (to this drummer’s ears) tinny accents — especially the handclap.

But while it didn’t sound much like an actual drum kit, that wasn’t really the point. What you could do with it, which was revolutionary at the time, was program rhythm and drum sounds separately. It also had the ability to store up to 32 patterns, which enabled it to produce some seriously complex music.

The virtual TR-808 is a pretty convincing replica too, even down to the legendary dangerous red button which more than one musician stabbed by mistake just before a live performance (the Sisters of Mercy tell a decent anecdote about Andrew Eldritch having to reprogram it from scratch just before going on stage while the guitars tuned up - very slowly).

Anyway, io-808 is the work of DJ Vincent Riemer who is using the Web Audio API to mimic the sounds of the physical 808. No, these aren’t Roland’s original samples, but they’re close enough to get a convincing feel of how the machine operates. As Riemer says in his notes: “Unfortunately if you are unfamiliar with the original hardware, the interface can be difficult to understand,” so we’d recommend having a good investigation of the tutorial first

More features are apparently on the way. And as a quick coda to the whole story, the original Roland TR-808 when it came out was $1,195. Original machines are now selling for nearly four times that.