Just what your Raspberry Pi needs: a tube amp 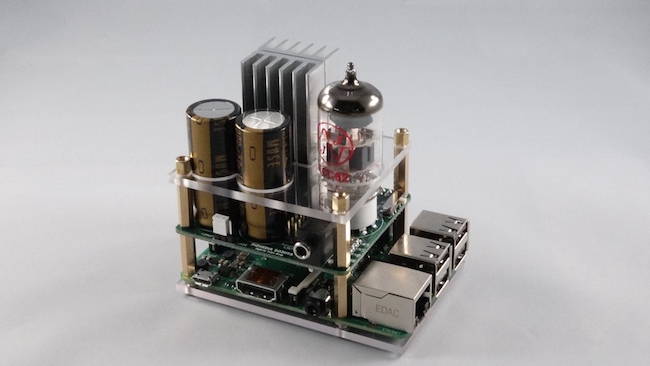 Where did you get that HAT?

We’re big fans of Raspberry Pi here at RedShark, it’s cheap, it’s awesomely versatile and its putting the computer back into the hands of the people. But even we’re not sure it needs a hybrid vacuum tube amp.

Plenty of people disagree with us though, which is why the Kickstarter set up by Pi2Media for the 503HTA has been well and truly oversubscribed and has seen over $100,000 pledged to make it happen.

The unit is essentially a High Quality I/O Shield designed to bring what Pi2 describes as “Sweet Tube Sound” to the Pi family of Single Board Computers. This HAT (Hardware Attached on Top) not only looks extremely funky but also allows the Raspberry Pi SBC to drive headphones from 32 - 300 ohm with what is referred to as ease and fidelity.

Once the unit hits production, cost is going to be $149, but Pi2 has already hit its first and second stretch goals, and thus the 503HTA now includes upgraded capacitors, a power switch, volume control options and an analog line in for stand alone operation that it didn’t have in the first place.

The extra backing, and this is the big recent news from the team, also helped the team change the 3.5mm Headphone Out to a 6.35mm (aka 1/4") jack. We’ll be interested to know the greatest ratio of cost per component people can get out of the resulting system, but if we matched the Audeze Sines we reviewed recently with a Raspberry Pi, that would give us a 12:1 headphone to computer cost ratio. Any advances?