Forget 4K: This is the biggest change about to hit the living room 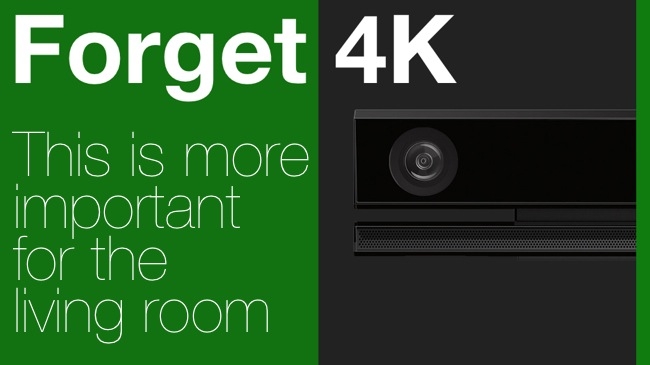 Of course one (4K) is about resolution and image quality and the other (Kinect) is about control and interaction, but with a bigger, sharper TV, you'd observe a typical living room's occupants behaving exactly the same as they always have. In a Kinect 2 living room, they'd be talking to the television and waving their arms - and perhaps their whole bodies - around.

Unusually for a press conference, Microsoft seems to have underplayed the capabilities of their new console - to the extent that some journalists went away thinking that the new Xbox was just a fairly routine iteration on the last one. This is quite wrong. Quite aside from the powerful internal architecture, the new Kinect is far and away the most significant aspect of the shiny new gaming device.

The original Kinect was impressive enough to have sold around 24 million units, transforming gaming and spawning a whole sub-culture of Kinect hacking, that was eventually approved and supported by microsoft.

The new one is in a different league, and Microsoft seems to have solved some really hard problems in bringing it to market.

On the face of it, it's more of the same, but better, but the sheer power and precision of the Kinect, coupled with the Xbox One's processing and even, possibly, some Cloud participation means that this is one powerful system - and it's transformative. It's even more so because the previous Kinect was just an after-market add-on that had to work with a generation of Xbox that wasn't designed for it.

Now, the two are completely integrated, and it shows.

Here's just an example: it can detect your heartbeat. Not by listening, but by watching the pulsating infra-red variation in your complexion. We can't see it, but Kinect can. We can only speculate about the effect on gameplay if you have an episode of ventricular fibrillation.

It will use this, plus facial analysis, to determine your mood, stepping up the pressure if it feels you're scared, or treading carefully if it thinks you're confident. Or it might just find some soothing music for you.

And because it has infra red sight, you can watch your movie or play games in darkness - while Kinect keeps its eyes on you.

The audio capabilities are beyond what you think might be possible. A non-directional microphone in a room with bad acoustics (i.e. a room in your house!) just picks up a complete mush, almost completely masking any potential voice commands. The Kinect separates voices from the background noise so well that it can understand commands over gaming or even movie soundtracks. It's extraordinarily directional as well, which helps to detect, localise and understand the incoming voice instructions.

Kinect's signature capability is knowing where your hands, feet, legs, body and head are, and how they're moving. The new generation device does this to an incredible degree of accuracy, and not just with one person standing in front of it but as many as six. It understands your skeleton, and even your musculature. If you're jumping off one leg, it will know that your leg muscle is working. You can make virtually any kind of gesture and it will interpret it correctly.

It's so good at knowing who's standing where, that it can even recognise one player handing the controller to another one - so if you swap while you're mid-track in a race, it's not a problem, you'll still be commanding your vehicle, because the system knows you've swapped. It doesn't do this by face recognition but simply keeping track of what they players are doing.

All of this is so far in advance of what we've had in the living room before that it's going to change the way we interact with our television. And it's with this in mind that the Xbox One goes even further.

We've been heard (and we haven't been able to confirm this - so treat it as a rumour) that Microsoft has applied for a patent that will allow content owners to restrict their products to working with a specific number of people. If the Kinect 2 is able to "see" more than this number watching or playing, it will stop the performance.

It has not just one, but three operating systems. Without going into too much detail, this allows it to run what is effectively Windows and the gaming system side-by-side. There are two virtual machines that run almost independently (although they do share some resources). So you can command the 'box to switch from gameplay to a movie and it will do so instantly. There's no need to load an app or stop a game: everything works at the same time.

This is the kind of responsiveness we have come to demand from our hardware and if we don't get it then we vote with our feet. The fact that the Xbox One is as responsive as it is will encourage people to use it and forget it - exactly what you want with a device in the living room.

This is such a powerful device that you have to wonder why anyone in future would consider building a "Smart TV". Why would you pay extra to have "Smart" software in your set when you can simply plug one of these in? No TV has the capabilities of the Kinect and none has such a powerful interface or media-handling abilities.

At the very least, everyone else in the TV game is going to be looking at this new console, wondering where to go next.

The Xbox one is all about how we watch tv

Confirmed: the Xbox One has 4K output and does 4K gaming

And here's a video from Wired showing the Kinect 2's motion-sensing capabilities in full.